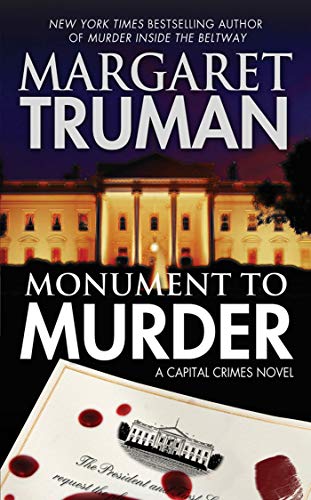 Understanding the power of Washington, DC, the city where her father was president, and her husband was chief of the New York Times Washington bureau, Margaret Truman used the setting for all her books.

Ms. Truman was in a unique position to write about the city that, as John F. Kennedy remarked “. . . is a city of Southern efficiency and Northern charm.” Ms. Truman set her books everywhere in DC: the White House, the Supreme Court, the Smithsonian, and the Library of Congress, making good use of these famous sites.

Monument to Murder, however, starts out as disappointment on two counts: a) the first 94 pages are spent in Savannah, Georgia, and b) despite the title, when we get to DC there is no connection to the Washington Monument.

Robert Brixton is an ex-DC, ex-Savannah cop turned P.I. who has never, despite many years in the “most haunted city” in the U.S.A., become accustomed to the heat of a Georgia summer. One morning Mrs. Eunice Watkins comes to him with an improbable tale: Twenty years ago, her daughter, Louise, a junkie and prostitute, was paid to take a murder rap and go to jail. To be fair, to Louise it looked like a good deal: $10,000 which went to her mother, and a chance to clean up in prison. After doing four years, she’s out only to get shot in the street. Mrs. Watkins wants to know who’s really responsible for the murder. The trail leads to DC.

Brixton is introduced to Ms. Truman’s perfect detectives, Mac and Annabel Smith, and they set in motion the latter three quarters of the book. The Smiths are lawyers, always a helpful trait in a sleuth. Mac now teaches law, but Annabel has left the profession and owns an art gallery in Georgetown. They live in the Watergate, and get asked to may Washington parties, thus picking up gossip in this most company town.

Politics is the coin of the realm; you love President Fletcher Jamison and his second wife Jeannie if you are a Republican. The first couple has plenty of skeletons in their closets, but that can’t stop the president nor his agenda. He is a venal figure with a mean streak, but projects a father figure persona to the country, suggesting that only he can and will undo the many mistakes of the previous (no doubt Democratic) administration. Ms. Truman is in her partisan element here: “You could almost hear ‘Onward Christian Soldiers’ played each time he left the White House.”

It’s hard to read this without thinking of another Georgian, now married for the third time, who has ambitions to the presidency and who pontificates about being both right and correct.

There is a silly subplot in Monument to Murder about a shadowy assassination organization that kills people who stand in the way of the right-wing agenda. The best part of that plot point is that the meetings of the killer and the man who orders the hits always take place in fast food restaurants—and the killer never eats. The company man is always urging him to get food because, well, it looks odd to come to a Roy Rodgers and not eat.

Ms. Truman died in 2008, and this book would have been better if she had lived to do some more editing. Does that explain why there isn’t any link to the Washington Monument?