Maman’s Homesick Pie: A Persion Heart in an American Kitchen 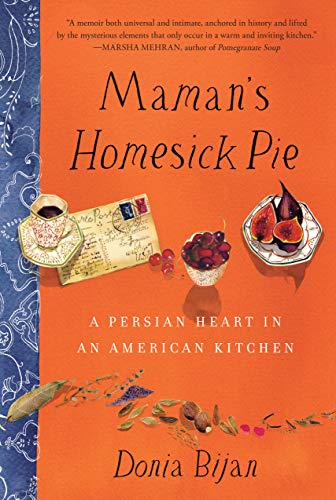 “The push-pull of Ms. Bijan’s relationship with her parents during their grief as she came of age will feel familiar to many readers, but the details of Ms. Bijan’s life will not. . . . Too much is left unsaid or unexamined here. As a food memoir, though, the book comes closer to fulfillment for its readers.”

Donia Bijan opens Maman’s Homesick Pie in sorrow, starting her cooking memoir a few days after her mother’s brutal death, run over while she was out for a walk. It’s a sorrow woven throughout the book, chronicling the brutal changes that came to Iran with the revolution and the exile that followed for Ms. Bijan’s family, their bewilderment when faced with American culture, and returning, at book’s end, to Ms. Bijan’s longing for her mother and the comfort she finds in her mother’s old recipes.

The push-pull of Ms. Bijan’s relationship with her parents during their grief as she came of age will feel familiar to many readers, but the details of Ms. Bijan’s life will not.

Born into a well-to-do family in Tehran to parents who built and ran an obstetrics hospital, Ms. Bijan offers up mostly idyllic childhood memories, full of swims in the family pool, elaborate parties, and, throughout, ceremonial everyday family meals—a focus on food as the source of much pleasure.

All that came to a horrible halt in 1978, when the family learned of the Iranian revolution while spending a summer holiday in Spain: Increasingly terrifying phone calls made it clear they could not return home.

With that, Ms. Bijan, 15 years old and itching to try life in America, left her parents behind to stay with a friend attending boarding school in Michigan. From that point on, her story focuses on the need to belong, to fit in, to find home. Despite strong pressure from her father to study medicine, she follows her calling: becoming a chef, first by studying in France, cooking at prestigious California restaurants, back to France for more training, and finally to opening her own, L’amie Donia.

This is a life story with a (so far) happy ending, despite the disappointment Ms. Bijan’s father felt in her and the struggle with that constant need to belong, and despite her mother’s bitter death—all because Ms. Bijan focuses on her mother’s strength and love. The indomitable grit her mother displays carries Ms. Bijan through, even from far away. But while interesting, it isn’t a particularly happy book: sadness continually comes through, even in slight, passing references, such as a mention of Ms. Bijan having almost no photos of her parents from when they started their hospital, long lost to the revolution.

Readers with an interest in Iran and its politics may wish for more than this book offers: More on her parents’ activities there, more introspection about the revolution, and more depth when she discusses the privileged life her family seemed to enjoy in Iran. Too much is left unsaid or unexamined here.

As a food memoir, though, the book comes closer to fulfillment for its readers. Her stories of working her way through French cooking school and finding a Paris to call her own don’t offer great surprises to those who have read other stories about chefs in training, but Ms. Bijan keeps them interesting by combining these with details of her parents’ lives, memories of Iran, and the daunting, exhausting work involved in becoming accepted and thoroughly trained in French and American kitchens.

Ms. Bijan’s own restaurant was thoroughly devoted to classic French bistro cooking, so it makes sense that she include a few French recipes here. But they will likely be easily skipped over in favor of the Persian recipes on which Ms. Bijan focuses, from simple ones, such as rosewater-scented rice pudding, pomegranate granite, and cardamom-inflected orange cookies, to the more complex roasted quince stuffed with lamb, split peas, fennel and currants; saffron yogurt rice with chicken and eggplant; and sweet-and-sour grape leaf dolmas with cinnamon and saffron rice.

She closes with apple pie, one of her mother’s many efforts to find her own place in America and adapt its flavors to her own, and with Ms. Bijan’s California version of her childhood memory of snow drizzled with sour cherry syrup—passing to her own child the recipes and memories of a Persian family, now truly belonging to America.