Leaving Everything Most Loved: A Maisie Dobbs Novel 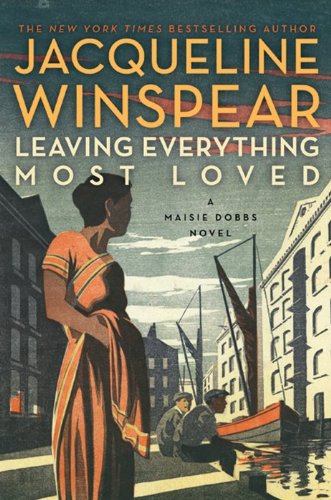 “. . . if Maisie drew a map of her life in Leaving Everything Most Loved it would mirror a Jackson Pollock painting.”

Jacqueline Winspear has changed the stock character of the Magical Negro into the Magical Indian in this book, a very disappointing outing from the creator of a great series.

The concept of the Magical Negro—a character who comes to the aid of white protagonists by virtue of special insights or mystical powers—has a long history in American fiction. This conceit has come under attack by some prominent African Americans because it implies black excellence is so shocking it can only be explained by magic.

It’s hard to count how many times the victim Usha Pramal is described as a beautiful butterfly, drifting along in her beautiful sari. Every Asian Maisie Dobbs meets during her investigation is a paragon of good. To make every Asian tolerant, forbearing, and wise insults the reader. Asians aren’t more patient than any other race, they are just as patient and impatient as every other race.

It is Maisie’s usual habit to make a case map—a long roll of paper that has the victim’s activities and actions with different color markers showing how they came into contact with the suspects in a case. But if Maisie drew a map of her life in Leaving Everything Most Loved it would mirror a Jackson Pollock painting.

Maisie lives with James Compton, and while she knows James wants to marry, she fools herself (and has for several books) into thinking everything is fine. James is working for a man Maisie despises who is intent on rearming England and making pots of money for the upcoming the Second World War.

And she puts up with this?

Meanwhile her loyal second, Billy has relapsed into shell shock, and his case of finding a young man has been a disaster.

Add in a two colossal coincidences: not only does Billy’s case intersect with Usha’s death but also one of the suspects is someone Usha met in India.

There are many perceptively drawn characters demonstrating why the author has been a bestselling author. The unctuous couple who, while running a rooming house for Indian women, take a good chunk of their wages and demand they attend the services of their local vicar, Colin Griffith. There’s the nice English woman happily married to an Indian man and both run a spice store, and the couple that brings Usha from India to work as their governess.

Maisie sets off on a long journey at the end of Leaving Everything Most Loved. Jacqueline Winspear would be wise to emulate Maisie and take a long hard look at how she could to return to the excellence of her previous books.