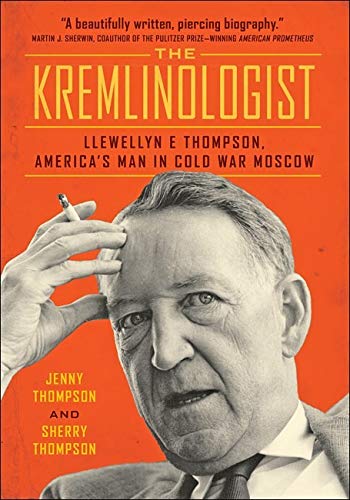 “The Kremlinologist is part biography, part Cold War history, and a fitting tribute by his daughters to a consequential American diplomat.”

The American diplomat and historian George Kennan called Llewellyn “Tommy” Thompson the best diplomat the U.S. ever had in dealing with the Soviet Union. Thompson’s colleague and friend Charles “Chip” Bohlen described him as one of America’s “most effective diplomats” and skilled negotiators. Historian David Mayers in his study of America’s ambassadors to the Soviet Union lauded Thompson’s contribution to preventing war between the superpowers.

Thompson’s career in the Foreign Service spanned 40 years, from 1929 to 1969. He served seven Presidents, but is most remembered for his influential roles in the Kennedy and Johnson administrations in the 1960s.

The Kremlinologist is the first full-length biography of Thompson. The authors are his daughters, Jenny and Sherry Thompson, respectively a former English language school administrator in Spain and a former director of a nonprofit foundation. The authors’ familial relationship to Thompson enables them to provide unique personal insights and memories about their father’s life and career.

It is somewhat surprising that Thompson’s life and career have not caught the attention of professional historians and scholars. He was involved as both a diplomat and an advisor in some of the most important events of the Cold War.

After a brief chapter on Thompson’s upbringing (born in 1904 in Las Animas, Colorado) and education (University of Colorado), the authors describe his first overseas assignments in Ceylon and Geneva in the late 1920s and early-to-mid 1930s.

Thompson was back in the United States in 1939, where he was assigned to the State Department’s Office of European Affairs. He received training at the Army War College and in early 1941 sailed to the Soviet Union where he served as second secretary at the U.S. Embassy in Moscow.

When the Germans invaded Russia in June 1941, the U.S. Embassy was moved to Kuybyshev, but Thompson remained in Moscow. He survived a six-month siege during which German forces came uncomfortably close to the capital.

As the highest-ranking U.S. official in Moscow, Thompson, the authors note, “became a conduit for messages between FDR and Stalin.” Soon, FDR bypassed Thompson and other embassy officials, using special emissaries, such as Averell Harriman, to communicate with the Kremlin.

“Thompson,” the authors write, “spent a great deal of time over the next two years studying, thinking, and writing about the internal workings of the Soviet system.” He, Kennan, Bohlen, and Harriman (after he became ambassador) frequently exchanged views about the nature of the Soviet regime.

In the summer of 1944, months before Kennan wrote his famous “Long Telegram” from Moscow, Thompson penned a 40-page analysis of Soviet foreign policy designed, according to the authors, to convince “the pro-Soviet Roosevelt administration [that] their assumption that the United States and the Soviets operated from a similar world view was mistaken.”

Under Stalin, Thompson explained, the Soviet Union was a “totalitarian state, endowed with an all-explanatory, all-consuming ideology, committed to the infallibility of government and party,” with a “messianic mood” that equates “dissent with treason.”

The Soviet regime, Thompson continued, professed a long-term goal of world revolution, but its actual policies were focused on practical goals.  The Soviets do not negotiate in “good faith,” he explained, nor do they “bank good will for future deals.” This meant, he concluded, that the U.S. might never have a “close relationship” with the Soviets, but “[c]ooperation at the top level for the achievement of broad objectives is possible . . .”

Thompson’s paper was soon eclipsed by Kennan’s Long Telegram (February 1946) and subsequent article in Foreign Affairs entitled “The Sources of Soviet Conduct” (July 1947), which set forth the intellectual foundation for the policy of containment.

Thompson was one of President Truman’s Russia experts at the Potsdam Conference, had a brief stay in London, then returned to Washington to head up the East European division of the State Department. He participated in the crafting of the Truman Doctrine and Marshall Plan, and even assisted Kennan in planning covert operations behind the iron curtain.

Thompson married Jane Monroe in October 1948, after meeting and falling in love with her on the SS Saturnia. Jane had a child by a previous marriage, and together she and Thompson had two more children, Jenny and Sherry.

George Kennan’s influence in the Truman Administration waned as he began to distance himself from the military aspects of containment. Kennan and Thompson had very little to do with drafting NSC-68 (April 1950), the classified policy paper that guided the United States in the early Cold War years.

Paul Nitze, who became one of Thompson’s good friends, was the chief author of the more hawkish analysis in NSC-68. The outbreak of the Korean War in 1950 appeared to validate Nitze’s views.

Thompson’s next assignment was to Austria as high commissioner and ambassador. There, he successfully negotiated an end to U.S. and Soviet occupation of the country.

The Cold War heated up in the mid-to-late 1950s. The French were defeated in Vietnam, and the U.S. gradually assumed the role of protecting the independence of non-communist South Vietnam. There were rebellious stirrings within the East Bloc, especially in Hungary where Soviet forces crushed a democratic revolt.

The U.S. and China nearly clashed over the small islands of Quemoy and Matsu. The Suez Crisis pitted the United States against Britain and France in the Middle East. President Eisenhower sent troops to Lebanon in 1958 and Fidel Castro seized power in Cuba the next year.

Most troubling to Americans was the Soviet launch of Sputnik and the false but growing sense that the U.S. was falling behind the Soviets in the arms race. This misleading notion of a “missile gap” was propagated for political purposes by Democratic presidential candidate John F. Kennedy in the 1960 election.

The authors reveal that Thompson was pleased that Kennedy became president. He thought Kennedy was more intelligent than Eisenhower and was impressed when the new president convened a full day’s meeting of Soviet experts, including Thompson, early in his administration.

Thompson stayed on as Ambassador in Moscow and became a trusted advisor to Kennedy as he navigated crisis after crisis, from the Bay of Pigs to Berlin to the Cuban missile crisis to America’s growing involvement in Indochina.

The authors to their credit do not accept the “history” invented or embellished by Kennedy partisans that portrays President Kennedy as a cool, effective crisis manager. Historians such as Michael Beschloss and Paul Johnson, among others, have convincingly deflated that notion.

Nor do they shrink from pointing out the self-serving actions of Robert Kennedy who falsely portrayed himself as the “hero” of the Cuban Missile crisis in his book Thirteen Days, and who attempted to conceal the fact that the administration traded U.S. missiles in Turkey for the removal of Soviet missiles in Cuba because it might hurt his chances of succeeding his brother as president.

The same cannot be said about Thompson with respect to his counsel to President Johnson about the war in Indochina. By then he had left Moscow and become an “ambassador at-large.”

His daughters examine Thompson’s policy advice during that time from a wholly anti-war perspective. They forthrightly acknowledge that they protested U.S. involvement in the war, and it is obvious that they accept the conventional view, most recently put forth by the PBS-Ken Burns program, that the war was unwinnable and immoral.

Judging by the footnotes in their book, the authors are either unacquainted with or have willfully ignored several important books that challenge the conventional wisdom about the war.

Thompson was one of many of LBJ’s advisors who promoted the notion that gradual escalation, repeated bombing halts, and diplomacy would persuade the North Vietnamese communists to forego their goal of victory. That was always a chimera.

Thompson served a second stint as ambassador in Moscow at the end of the Johnson administration and attended the uneventful Glassboro summit in June 1967. President Nixon later appointed Thompson to serve with his friend Paul Nitze in the SALT I negotiations with the Soviets. Détente was in full swing with Thompson’s wholehearted support.

Interestingly, Thompson, who was among the first diplomats to sense the Sino-Soviet split in the early 1960s, opposed efforts by Nixon and Henry Kissinger to play the “China card” against the Soviets.

Throughout the book, Jenny and Sherry Thompson intersperse memories of everyday life in the Thompson household, whether in Spaso House, the residence of the ambassador in Moscow, or the other places they lived during their father’s interesting and eventful career.

Thompson died of pancreatic cancer on February 6, 1972. The Kremlinologist is part biography, part Cold War history, and a fitting tribute by his daughters to a consequential American diplomat.