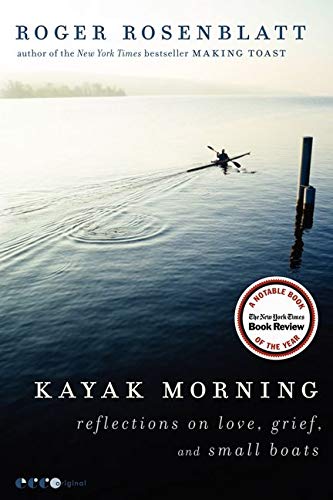 “Kayak Morning might be described as a literary stream of consciousness that is both poetic and poignant.”

Is it possible to suddenly lose a loved one and, through the grieving process, ultimately accept the death of the dearly departed? Secondly, is it possible to let go of the haunting thoughts one may have—recalling each detail and memory of their times together? And finally, can the survivor move forward with some semblance of peace?

In the book Kayak Morning, author Roger Rosenblatt struggles to find answers to some of the most important issues about life, death, and grief that have plagued the human psyche for eons.

Kayak Morning might be described as a literary stream of consciousness that is both poetic and poignant. On one level it explores death and grief from an emotional viewpoint by a father who suddenly loses his daughter; however, it is also a very contemplative and philosophical examination of life/death, love and their relationship to the natural order of the universe.

As a child, Mr. Rosenblatt demonstrates an early desire to contemplate nature. As he describes his experience in school he states, “During class I would daydream out the window at one bright leafy tree.” When asked by his teacher if he cared to rejoin the class, his thoughts couldn’t have been clearer in his desire not to do so. And writing became his salvation—an anchor he could trust.

After his daughter Amy’s death, he wrote about it in the New Yorker, which ultimately became a book entitled Making Toast. Afterward, his pain not only continued but worsened as time went on. After receiving a multitude of letters from readers who had experienced losses of their own about the impact of grief that we all experience in our lives—Mr. Rosenblatt was better able to move forward in the pursuit of his truth.

During much of Kayak Morning, the author shares his keen observations about the natural order of life from his experience in an actual kayak, paying close attention to every detail of the water, local wildlife, and the general landscape.

Portraits are meticulously painted, entreating the reader to inwardly explore his or her own thoughts and struggles. Through this process of awareness, individuals develop a bond with others who have similar struggles—and a concomitant need to create some semblance of peace. In the kayak, he can be in the world but necessarily a part of it, which provides great latitude and freedom to become a witness to the complexities of life that still remain unsolved, without falling into a hole of depression in the process.

Upon Penniman’s Creek, author Rosenblatt paddles with myriad observations about the surrounding environment:

“Above it rise trees of a hundred greens, thick as privet hedges-bright green, purple green, descending to black, pale green, nearly white. White oaks, willows, pitch pines, tupelo tress whose branches stick out at a ninety-degree angle. One dead tree, the color of ashes, rises among them like a corkscrew.”

Another poetic description that conveys a poignant picture of his surroundings is: “Beneath me lie the gothic rocks in their dark museums.” Very rarely does an author paint a portrait so rare, so descriptively, that the reader can be enveloped within the imagery as if present in the same moment.

Mr. Rosenblatt adeptly draws a comparison between kayaking and writing explaining that “Kayaking is like writing, requiring the same precision and restraint. Wild swings will get you nowhere.” And further, “You are alone and not alone. No one writes alone. Write, and you are in the company of all who have written before you. No one paddles alone.”

Reminiscent of Thoreau’s writing, Kayak Morning: Reflections on Love, Grief, and Small Boats allows for a deeper contemplation of life’s critical issues. While Mr. Rosenblatt realizes that there are some questions that have no answers, particularly in the area of grief and loss, he indicates that he will continue to search regardless.

Readers eager to pursue these ongoing questions with great thinkers need to add Roger Rosenblatt to the list.

Laura Schultz is a freelance writer and has been a licensed Marriage and Family Therapist for over 25 years. She has published articles on eating disorders, depression attaining joy, as well as health related topics such as allergies and vegan living.