In This Grave Hour: A Maisie Dobbs Novel 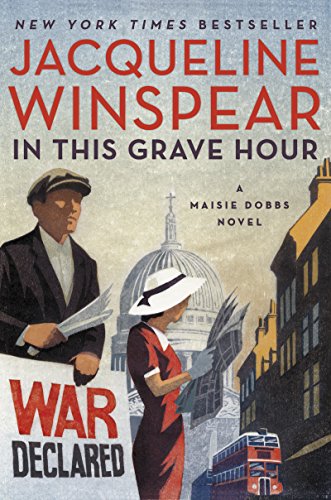 “In This Grave Hour is lucky number 13, and there’s no sign the series will stop showing how individual acts of heart can do much to counter collective tragedy.”

In the new Maisie Dobbs historical mystery set in England, Maisie again puts a few small worlds to rights while the greater world disintegrates around them.

Her story began in World War I and has continued through the aftermath in 12 volumes. Volume 13 begins just as World War II does, with the book’s title drawn from King George VI’s momentous statement: “In this grave hour, perhaps the most fateful in our history . . . For the second time in the lives of most of us, we are at war.”

The generation that suffered both world wars knows horrors inconceivable to those of us born afterward. Maisie and her team of assistants, friends, family, and connections have barely recovered from their WWI nightmares when they are poised to experience a new set.

On top of that, a Belgian refugee associated with England’s secret service is murdered, and Maisie is asked to dig behind the scenes to find out why.

Unlike most fictional sleuths, Maisie is a psychologist as well as an investigator. This story, like each of the previous, covers her search for the truth on two fronts. Doggedly, systematically, she and her assistants conduct a factual investigation, which may be in conjunction with or parallel to the police investigation.

At the same time, she digs into the matter’s heart. “That’s what my job is about,” she says. “It’s like sticking pins into anything I touch, until I hear someone scream ‘Ouch.’ Only that scream is something I feel in my heart, as if the dead are letting me know I’m on the right path.”

Thus these stories focus on the human factor in murder’s equation, touching on the darker and sadder side of people’s lives. Maisie explains: “It’s this business of knowing the who, but not the why. . . . sometimes we instinctively know the identification of the perpetrator of a crime, but we don’t trust ourselves—or perhaps we cannot be trusted, in the circumstances. Which is why the ‘why’ is so important.”

It’s also bleak. Maisie may be a loving, generous, moral, upstanding citizen, but she’s also prone to depression and struggles to maintain a positive attitude when emotional baggage is dragging her down. Digging into the dark side places her constantly against herself as she quests for truth and justice. Meanwhile, the world around her becomes a darker and darker place.

The author presents these qualities in smooth, graceful prose that showcases her long professionalism. She conveys compassion and grief so well that it’s hard for readers to not relate to the characters and what they’re experiencing, even if they’ve not shared the exact circumstances.

On the down side, there are a few “as you know, Bob” moments when characters give backstory through dialogue in a manner that most people who know each other wouldn’t use, and which therefore sound stilted. It’s lightly done and only occasional, but it stands out against the more realistic and engrossing dialogue. There’s also Maisie’s handy ability to hypnotize people, which, if you haven’t read all 12 volumes, comes across as too convenient in this episode.

These minor peccadillos are outnumbered by the novel’s virtues. The historical accuracy is excellent, allowing people who read historical fiction for education as well as entertainment to rely on the series for a sense of what the era and location were really like.

Readers who like straightforward whodunits can also expect satisfaction. Ditto anyone who enjoys the rich character development and exploration of important life issues that exemplify literary fiction.

The best thing for all is how the whole series delivers solid story and sympathetic characters. In This Grave Hour is lucky number 13, and there’s no sign the series will stop showing how individual acts of heart can do much to counter collective tragedy.