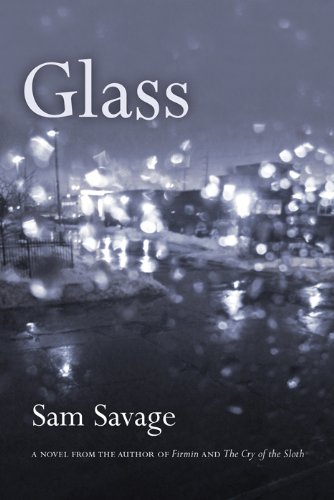 “Sam Savage’s exhilarating, often lilting use of language and his faultless characterization of the eccentric, unraveling of his main character, Edna, is evocative, poetic, and compelling.”

In a dingy room, Edna is writing—typing, she prefers to call it—about her life with her late author husband, Clarence. But like poet Stevie Smith quoted at the front of the book, she is not waving, but drowning through her thoughts.

Prompted by a letter from Clarence’s first publisher asking her to write a short preface for a 40th anniversary reissue of one of his books, Edna is at first reluctant—almost angry—at the request, but eventually she hauls out her old typewriter.

If she does it, she decides, it will not be short—her own emphasis—and it will not be just about his life, but hers as well—a life that spools and spills onto the pages as it unravels along with her mind.

“An oldish woman is typing her life up in a room filled with dirty light” is how I might begin the book, she muses.

Is that book an homage to Clarence, the preface to Sam Savage’s novel asks. “Was she the cultured and hypersensitive victim of a crass and brutally ambitious husband, or was he the caretaker of a neurotic and delusional wife?”

Edna’s thoughts tumble onto the paper through the typewriter keys exactly as they come to her: her wealthy, privileged childhood; her despair at finding no milk in the refrigerator; the menial job to which she simply never returned one day; Clarence’s transgressions; her unpaid rent; the irritating scrutiny of the bulge-eyed rat in a glass tank left in her questionable care by her only neighbor, for whom she has “a dearth of fondness;” in the down-at-heel building in which she lives; her father’s fall from grace—all given equal attention and all equally dismissed.

Author Savage’s writing seems artless, though it is far from that. A Faulknerian stream-of-consciousness, while appearing easy and breezy to accomplish, is practically impossible for most writers—especially those whose internal editor demands constant attention.

It’s quite an impressive novel considering that the consciousness isn’t even Mr. Savage’s own—and neither is the gender of its owner.

Far from being disconcerting, Edna’s habit of tumbling in and out of subjects seems perfectly natural—a testament to how real she becomes to the reader is a nod to a fully fleshed-out character generated from an imaginative and skilful writer.

In the process of typing out what she would put in the book about her life she is, of course, writing the book and then tossing it all away—her life and the book—as she tramples on the pages that fall and scatter over the floor after they’re ripped from her typewriter.

“It used to irritate Clarence when I would go back and forth in this manner, saying one thing and then another, with the second thing cancelling out the first,” she recalls.

“He said that my back-and-forthing drove him nuts. But frankly there was something almost brutal about his own thinking. If one can even call it thinking.”

Clarence, it seems, was a disappointed man, his successes far too small for his ambitions. Some of his books sold, and magazine articles, too, but according to Edna, who never liked them, the books became worse as the years progressed. He was able to do what he did and write the way he wrote, she believed, “only because he was simply blind to his sentences stamping across the page like little soldiers, each armed with a dangerously active little verb.”

No wonder Clarence—boorish and common though he undoubtedly was—transgressed, seeking approval and acceptance elsewhere.

“I imagine some people will prefer that I say something on the order of Clarence was the love of my life,” she admits, although it is clear that he was never that.

What was he, then?

Not the provider, certainly, for it was her money they spent when they were first together. Not particularly handsome, either—although Edna, by her own admission, does not have a visage worth the homage of an oil painting, either.

At first, this couple had books in common and would read to one another—though even that was shortlived—until they were eventually “reading different books . . . constructing different worlds almost, in which we could sit and be ourselves.”

Lest you think Glass is a depressing read, let me assure you that it is not.

Sam Savage’s exhilarating, often lilting use of language and his faultless characterization of the eccentric, unraveling of his main character, Edna, is evocative, poetic, and compelling.