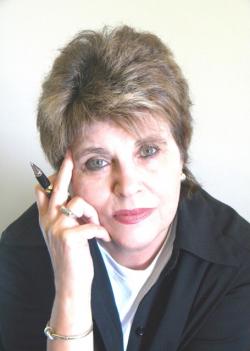 Stevie Godson is a career journalist and columnist based in South Africa’s beautiful Eastern Cape. She started her career in England as a news reporter but once in South Africa, concentrated on entertainment.

Ms. Godson edited two music magazines and was associate editor of another, but made her name as a critic and columnist for the much-lauded Rand Daily Mail, which led the media fight against apartheid for decades. She was an as entertainment publicist for Sun City, handling such stars as Queen, Elton John and Rod Stewart, and also wrote original lyrics for three Extravaganzas. Ms. Godson then moved to Bop Broadcasting Corporation as head of media relations, where she also had her own books program on one of the organization’s TV stations. In the mid-1990s, she joined BMG Music as head of local music, signing some of SA’s biggest acts.
In 2000, she moved from Johannesburg to the coast, and edited a weekly newspaper before joining the Daily Dispatch as a columnist and copyeditor. As the newspaper’s “grammar guru,” she rewrote the publication’s style guide. Ms. Godson was a director for 11 years of Primedia Broadcasting, SA’s largest independent radio corporation and a founding member of the National Association of Broadcasting. She also served on the national music industry body, Asami."

We Went to the Woods: A Novel

There isn’t much mercy in this viral age for anyone who’s publicly indiscreet, and when Mackenzie Johnston, more commonly known as Mack, betrays her housemate on reality TV, she’s swiftly submerged

If you’ve read Mary Miller’s captivating debut, The Last Days of California—an eccentrically peopled coming-of-age tale—you might be expecting something similar from her second novel,

The Dakota Winters: A Novel

“cleverly suffused with New York sensibilities, politics, pop culture, and celebrity as it seamlessly segues between fact and fiction.”

Ever walked into a forest? Evocations of enchantment, majesty, beauty, and even fear are all around. The stuff of fairytales.

“Sooner or later, we have to venture beyond our biological family to find our logical one, the one that actually makes sense for us.

Every man of God has two religions, according to writer Patricia Lockwood: one belonging to heaven and the other to the world.

Word by Word: The Secret Life of Dictionaries

It’s difficult to describe quite how delightful this book is for a word nerd.

Miss Treadway and the Field of Stars: A Novel

The Accidental Life: An Editor's Notes on Writing and Writers

Here’s an irony: If ever a book title needed editing, it could be the one on the cover of award-winning American editor Terry McDonell’s new book.

The Latter Days: A Memoir

Born into a community of devout Mormons, it's only when she starts kindergarten that Judith Freeman realizes different lifestyles exist in the outside world: It's apparently full of heathens and ot

Fall of Man in Wilmslow

When Detective Constable Leonard Corell is called to a house in a quiet English suburb he discovers a man lying lifeless on his bed, white froth dried into a dribble of powder at the corner of his

The Road to Little Dribbling: Adventures of an American in Britain

Billed as “a loving and hilarious, if occasionally spiky, valentine” to the author’s adopted country, Bill Bryson’s follow-up, two decades on, to his bestselling Notes from a Small Island,

The Hours Count: A Novel

Kitchens of the Great Midwest: A Novel

If Eva Thorvald—whose life we follow (more or less) from the time she’s born—ever prepares your food, rest assured it will taste exquisitely unlike anything you’ve ever eaten before.

Between You & Me: Confessions of a Comma Queen

“Let’s get one thing straight right from the beginning,” says Mary Norris. “I didn’t set out to be a comma queen.

The Mockingbird Next Door: Life with Harper Lee

“That there is a fascinating story to tell is indisputable. That Ms. Mills does a good job putting across the information she’s been given is also completely clear.

Tibetan Peach Pie: A True Account of an Imaginative Life

“Required reading for those who like their literature oozing with imagery, Tibetan Peach Pie is as engrossing as it is eccentric—just like the author’s life.

“The Transcriptionist is suffused with prescient insight into journalism, ethics, and alienation. . . . A thought provoking, original work.”

The Last Days of California

“Brimming with acute observation and inspired prose, Mary Miller’s The Last Days of California is a blessing of a book.”

“. . . a sweeping and memorable story of struggle and suffrage, love and redemption, . . .”

“If it’s The Sound of Music you’re after, this one’s definitely not for you.”

Think the music business is sleazy?

The Death of Santini: The Story of a Father and His Son

1,227 Quite Interesting Facts to Blow Your Socks Off

“Unmitigated seriousness has no place in human affairs.”

The Bohemian Love Diaries: A Memoir

Building Great Sentences: How to Write the Kinds of Sentences You Love to Read

The Last Summer of the Camperdowns: A Novel

“Given the enormous appetite for television soap operas . . . should sell up a storm.”

“If you enjoy a lightly told tale, it’s well worth spending a few hours of your time in the company of Brian Kimberling . . .”

“Literary type, recovering from the trauma of war, pursues true love, revenge, and an accidental career in publishing.”

“. . . deserves to be read in its enchanting entirety before the inevitable movie deal comes to pass.”

Portrait Inside My Head: Essays

“Portrait Inside My Head is a worthwhile, sometimes funny, always personal journey through a life well told.”

To Show and to Tell: The Craft of Literary Nonfiction

“To Show and to Tell: The Craft of Literary Nonfiction provides clues as to how one might aspire to write the way Mr. Lopate does.”

“. . . an intelligent page-turning mystery combined with a good dollop of well-told history . . .”

“. . . some very fine writing indeed, . . . I want to read [it] aloud just for the joy of hearing precisely how the words have been strung together.”

“. . . I’m not convinced it was even worth turning to the second page.”

Mixed Periods and Other Grammar Scares: How to Avoid Unplanned and Unwanted Grammar Errors

“Ms. Baranick contrives one cringe-worthy analogy after another.”

Playing with Matches: A Novel

Lies, lust, and betrayal form the backbone of this Southern story.

The Virgin Cure: A Novel

The Man Who Planted Trees: Lost Groves, Champion Trees, and an Urgent Plan to Save the Planet

“It’s a tough—and gargantuan—job, saving the planet, so why shouldn’t some of it fall to the recovering alcoholic, ex-arm-wrestling, street brawling survivor of a near-death experience?”

“True to his word, the author manages to spell it all out for us in down-to-earth detail with nary a hint of academia clogging up the process.”

“What Tutu: Authorized reveals, in meticulous and articulate detail, is the little man’s fearless and unflagging determination and his crucial role in the fight against one of the

“In this absorbing debut tale of excess and entertainment, the truth of both the music business and the artists themselves screams out from every page—testament not only to Mr.

Confessions of a Left-Handed Man: An Artist’s Memoir

“Tawdry as this first love affair with literature may have been, how glad we are that Peter Selgin was tempted into it—and fell head over heels.

“Sam Savage’s exhilarating, often lilting use of language and his faultless characterization of the eccentric, unraveling of his main character, Edna, is evocative, poetic, and compelling.”

“‘What does matter is that a lot of people died because I killed them, and I lived. That is what I set out to do and that is what I accomplished . . .