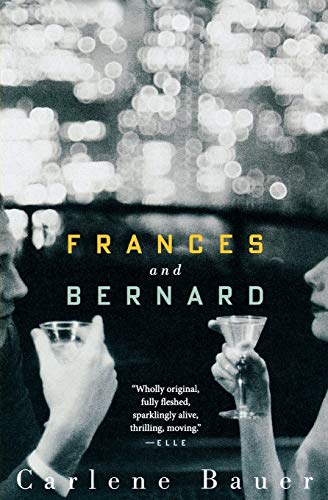 “Frances and Bernard is a dour thing. It is, however, impeccably well written and well constructed within the strictures of its epistolary limitations. It is, in truth, a flower that is very slow in unfolding, but a flower nonetheless . . .”

Frances and Bernard, the novel by Carlene Bauer now in paperback, recalls a simpler, happier time.

A time in which authors courted each other in epistolary fashion, comparing viewpoints on Saint Augustine and God, and likewise contacting their editors and beseeching them for the sake of each other’s work. Like this:

Bernard, writing to John, the editor for his (Bernard’s) book of poetry, concerning Frances’s book: “I think her editor is a girl who has her job because she is tenacious and vapid—the tenacity masking the vapidity, and the vapidity fueling her ascendency because vapidity frees the mind from bothersome, cumbersome self-examination. Let me know what we can do.”

The moment in time in which the pre-war lost generation gave way to a post-war gaggle of Manhattan literati. A moment of bonhomie, of writer’s colonies, and cocktail parties to celebrate book launches. A time when terms like “vapidity” were still a part of everyday speech.

A time before authorship became a blood sport, something akin to the Hunger Games. A time before the era of the MFA in Creative Writing let loose giants across the land, all writing tales with oblique endings.

Frances and Bernard, we are told are based upon two of America’s best mid-20th century writers: short story genius Flannery O’Connor (if you’ve never read her collection Everything That Rises Must Converge, drop everything and get busy) and poet Robert Lowell (Ditto his 1959 collection Life Studies). This comes as both a blessing and a curse, in that the reader keeps trying to fit Frances and her beau Bernard in O’Connor’s clothing, Lowell’s round glasses, which is a detriment to the work.

And a hyper-earnest work it is. There’s not a glib adverb in the whole manuscript.

Frances, a budding young novelist, meets Bernard, a young man with poetry in his blood, at a very Yaddo-like place. A place that they, in their volley of letters back and forth, refer to only as “the colony,” a writer’s retreat of the sort that most typing on keyboards can only dream of: a getaway where the talented few get to write all day and cavort the night away. Where manuscripts are polished and romances begun.

The book begins with a letter from Frances to her BFF Claire and then a letter from Bernard to his wingman Ted, like letters home from camp.

This is important to note in that, from the start, the device of creating a novel in the form of letters is cumbersome to reader and writer alike. Because there are times in which the author needs for either Frances or Bernard to talk about the other—as here, in which each of them writes about meeting the other:

Frances, to Claire: “There was one young man who did bear scrutiny. Bernard Eliot. Harvard. Descended from Puritans, he claims. Another poet. But very good. Well, I guess I should say more than very good. Great?”

Bernard, to Ted: “I met a girl I quite liked—but not in that way. I think you’d like her too. She looks untouched, as if she grew up on a dairy farm, but she’s dry, quick and quick to skewer, so there’s no mistaking that she was raised in a city. Philadelphia. Her name is Frances Reardon. Was a little Mother Superiorish. She’s just escaped from the workshop at Iowa.”

From time to time letters cannot fly between Francis and Ted, and then other characters must be called into play, seemingly only for this reason. Thus Claire and Ted, who are sort of supernumeraries, stationery and stamps a’ready.

Which is, let’s face it, awkward. Author Carlene Bauer even uses the device to conjure a kindly, wise old nun just so that Francis can write to her for advice and then not send the letter.

Worse, the device forces all the story’s action into the past, out of the present moment for the characters who later recount it in their letters—rather like the stilted responses that are given by by-standers and witnesses to crimes, or by neighbors who can only recount that the man in the apartment upstairs always seemed nice before he apparently began chopping up strangers. By always having the action of the novel removed from the present moment and recounted in an aftermath, the reader is left only with the filter of the letter-writer’s re-telling, which itself creates a third issue, that of the reader’s ability to cope with the epistolary recountings themselves.

Which brings up the issue of Frances. Very devout, Frances. As Bernard put it, “a little Mother Superiorish.” With the emphasis on the “superior.” And while she has been given Flannery O’Connor’s devotion to Catholicism, she lacks O’Connor’s ability to encode this devotion with actual art, and, instead merely hectors. (On reading Bernard’s book of poetry, Frances writes to Claire: “Christ is not really in these poems. He is too on the surface of them to be actually moving within them.”) Throughout the novel, Frances also jumps from devotion to sharp retort, issuing her invectives to any and all surrounding her often enough to make the reader want to ask her, “You just took Communion with that mouth?”

Frances and Bernard meet when young and hopeful. They correspond. They collide, really, into each other’s lives. Each builds a rather magical reputation for himself or herself as a writer: Frances for writing the slim, literate novels (Bernard describes her first as being “about a hard-hearted nun who finds herself receiving stigmata.”) of the sort that Bette Davis wrote in Old Acquaintance. Bernard writes poems first about his love of Christ, and then, later, gains some literary traction for writing about his growing sense of agnosticism. They live, they love, they learn—first apart (they are, after all, writing letters), then together, writing to Claire and Ted and that nun, to keep the story going, then apart again.

And the reader, through it all, admires the beauty of Ms. Bauer’s writing, the elegance of her prose, and her dedication to her characters, especially that pill, Frances, whom the author has grace enough to allow a moment of clarity after a certain number of years in which she finally seems to recognize herself as the pill she is. And, thus, both author and creation are redeemed.

Of Bernard, this is only this to say without issuing spoilers: Francis would have likely driven me into the nuthouse as well.

Frances and Bernard is a dour thing. It is, however, impeccably well written and well constructed within the strictures of its epistolary limitations. It is, in truth, a flower that is very slow in unfolding, but a flower nonetheless that promises a full garden perhaps to come.