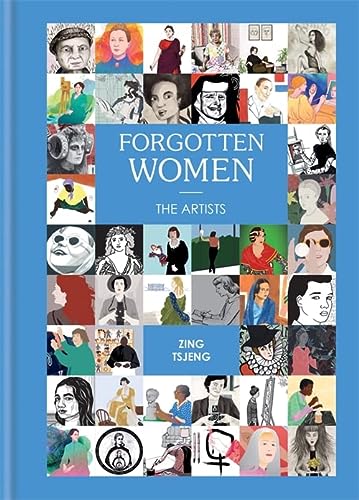 Forgotten Women: The Artists is part of a “brand new series, which will uncover the lost histories of the women who, over thousands of years have refused to accept the hand they were dealt and have changed the course of our futures forever.” Certainly, most of the women in this collection of profiles are not household names, but the claim that they have altered the course of our lives could only apply to those who were eventually discovered, often later in life. Probably the truly forgotten women were those who expressed their talents through the so-called decorative arts—including pottery, weaving and quilting—for their own domestic use and satisfaction.

This and other books in the Forgotten Women series (also forgotten are Writers & Leaders) represents a new trend in feminist publishing that aims to give women their due. Most of these books are implicitly or explicitly directed at girls and women, which rather seems to miss the point, but on the cover of Forgotten Women: The Artists we are extolled (on a removable sticker) not only to “Buy a copy for your daughters, sisters, mums” but also “for your sons, brothers, dads.” Boyfriends and husbands are still safe.

This is a very nicely produced small volume that profiles 48 women artists under the categories Abstract, Figurative, Performance & Conceptual, Craft, Photography, and Design. The selection of artists includes women of all ages, ethnicities, and regions.

The introductory essay reviews the traditional obstacles to women becoming artists quoting feminist art historian, Linda Nochlin: “The fault is not in our stars, our hormones, our menstrual cycles, our empty internal spaces, but in our institutions and our education.” As Zing Tsjeng points out, as part of being barred from professional training women were “barred from studying the nude male form, which was seen as essential to mastering the art of drawing.” As a result she sees that women leaned toward self-portraits and still-life.

Several women in this volume gave up their own careers to support male partners, or had their contribution co-opted or overlooked as was the case for Camille Claudel, lover of the sculptor, Rodin; or Baroness Elsa von Freytag-Loringhoven, who, it has been claimed, was the true originator of Marcel Duchamp's Fountain.

Though the volume does not contain reproductions of these women’s works—presumably the costs would have been prohibitive—each individual portrait employs the style and the colours deployed by that person in her work. The text of each profile is detailed and well-researched.

Personal favorites are Emily Kame Kngwarreye (1910–1996), an Australian aboriginal women who began painting when she was 80, and whose genius was compared to that of Jackson Pollock and Mark Rothko; and Alma Thomas (1891–1978) who at the age of 80 (again) was the first black woman to have a solo show at the Whitney Museum of American Art in Manhattan. But there are many other candidates for our admiration whom we have forgotten, even though several, like Emily and Alma, have achieved success in their lifetimes.

The majority of artists included here come under the Figurative label, including prehistoric cavewomen said to have left their prints on a cave wall in Spain. Many fewer women are listed under Photography and Design (mostly architecture), still primarily male domains.

Probably a key to the longevity of the reputations of these and future women artists lies in the interest and commitment of museums and galleries, which as Tsjeng notes have increasing numbers of women in leadership positions who are keen to reflect the true diversity of artistic endeavor and achievement in their institutions.

A dramatic example of this commitment to diversify comes from the Baltimore Museum of Art which “plans to sell seven works by white male artists, including Andy Warhol and Robert Rauschenberg, to fund a ‘war chest’ for acquiring works by women and people of colour.”