The Fifty-Year Rebellion: How the U.S. Political Crisis Began in Detroit (American Studies Now: Critical Histories of the Present) 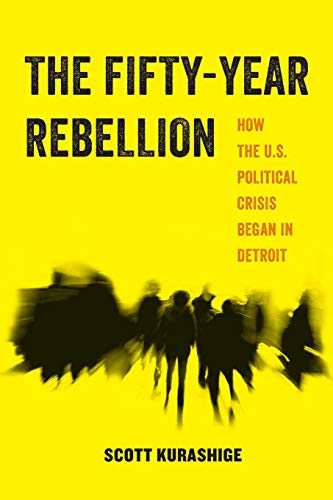 Detroit is synonymous in contemporary American politics with dilapidation, crime, and hopelessness. Last year, the Federal Bureau of Investigation (FBI) once again listed Detroit as America’s deadliest city. The federal authorities claimed that in 2016 there were 9,882 cases of assault in Detroit. The Detroit Police Department disagreed with these figures, but even their lower tally (8,916) makes Detroit seem like a veritable war zone.

According to academic and writer Scott Kurashige, all of Detroit’s woes have been orchestrated by decades of corrupt elites. Indeed, the main thrust of The Fifty-Year Rebellion is that Detroit’s ruination is symbolic of what the current malaise infecting the entirety of the United States, both in terms of economic and social matters.

Kurashige mostly takes aim at the corporate leaders who, in 2013, established a “business-friendly” city in order to induce increased investment into Detroit. Many have touted the success of this program, and some have even claimed that Detroit (or at least parts of it) are on the rebound. Kurashige does not buy it.

The Fifty-Year Rebellion details how corporate capitalism has been the bane of Detroit’s existence for generations. Both Democrats (who have virtually controlled Detroit unopposed since the 1970s) and Republicans have fed the Detroit public lies about their city’s economy in order to maintain their stranglehold on power.

For instance, Kurashige notes that the Detroit auto bailout of 2008–2009 neither benefited workers nor did anything to seriously challenge the neoliberal orthodoxy of Wall Street.

Kurashige is equally cynical when it comes to the supposed “populism” of firebrands like former Detroit Mayor Coleman Young. Young, the first African American mayor of the city, often utilized the radical chic and black power politics of the 1970s in order to grab black voters, but most recognize that his administration was nothing short of a pox on the city. For Kurashige, Young was a sellout who spoke in the patois of working-class black Americans while working closely with white-owned corporations.

As with almost everything in The Fifty-Year Rebellion, class and race are intertwined with Kurashige complaining about how the one percent is synonymous with white America and vice versa. Often, Kurashige attacks Detroit’s many black politicians by claiming that their nominally tough mannerisms and behavior are done to please their white backers. Academic word salad becomes very prominent in these passages.

All in all, Kurashige’s work can be seen as an American polemic against the reign of neoliberal austerity. However, like many on the hard Left, especially those ensconced in the Ivory Tower, Kurashige’s rage in The Fifty-Year Rebellion gets not only tiresome, but is actually ineffectual. Yes, the comfortable nexus between corporate economic power and American governance is ruinous, but the solutions Kurashige offers are comically unserious.

His vote in favor of “participatory democracy” does not make sense given his many passages concerning racial polarization in the United States. Democracy provides the fire for racial animosity, not the solution. Lee Kuan Yew, the former Prime Minister of Singapore, learned long ago that in democracies, people vote based on their religion and race rather than on their economic self-interest. Kurashige is not necessarily interested in racial harmony either, given his disparaging tone toward anything “white” in this book.

In sum, The Fifty-Year Rebellion is a fascinating look at how corporate power corrupts the body politick, but it does not go far enough. The “authoritarian plutocracy” that Kurashige worries about is inevitable given the history of all democracies, from ancient Athens down to Detroit. Furthermore, America’s growing racial tensions, which scholars like Kurashige exacerbate at every turn, will inevitably lead to the growth of caesarism or the junta-style politics one sees in the multi-racial nations of Latin America. Any offer less than a partition of the American state along ethnic lines or religious lines is tilting at windmills. This is the blind spot of The Fifty-Year Rebellion.