Embrace, Release, Heal: An Empowering Guide to Talking About, Thinking About, and Treating Cancer 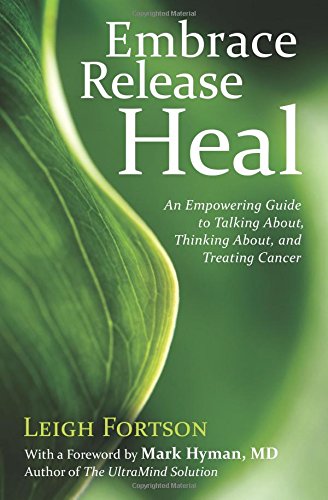 This is a story of healing—of body, mind and spirit. Leigh Fortson’s informational book is a must read for any patient with a cancer diagnosis. The purpose of the book is to “empower those with cancer—or any type of degenerative illness—during a time when feeling empowered is in short supply.” Fortson considers her work a map that describes a path to “hopefulness rather than fear” and emphasizes the importance of a patient’s involvement in his own care.

Mark Hyman, M.D. writes the foreword, explaining that we are losing the war on cancer because we are focusing on what we can excise, kill or retard, rather than—or at least in addition to—attention to diet, exercise, and reducing environmental toxins and stress levels. Citing one example, he points out that cancer incidence is increasing in women with “the breast cancer gene—BRCA1 or 2”—now at 82 percent. In 1940 the risk for women with the same gene was only 24 percent. Why?

We do know that cancer is not a single disease, and there is no “one size fits all” treatment. The relationship of mind and body is widely accepted in the medical community, but research and teaching is only beginning to emerge about the roles of nutrition, the influence of stress on illness and the effect of the environment on a person’s state of health. According to Dr. Hayman, “The pieces of the puzzle are scattered about the landscape of medical science. They need only be assembled into a story that can guide clinical care.”

Here in one volume is a compendium of information and resources that contributes to this process of assembly. The book includes “tools:” such as a reading list, websites, addresses, and a list of questions frequently asked by patients. In this regard, Ms. Fortson does not endorse any one plan of treatment. The facts and information are laid out; the reader makes his own choices. The intent is to provide the resources that will inform and/or illuminate.

Much of this volume’s strength comes from the stories of individuals whose cancers have remained in remission or disappeared altogether—including the author’s. Each journey of healing is unique and each person’s response offers options to readers. Ms. Fortson looks at the role of the cancer patient in his own treatment, and ways to access the healing power of the subconscious mind. Trusting one’s own instincts and believing in a positive outcome play a large role, according to the author. She knows; she’s “been there.” This is not an indictment of traditional medical treatment—even though disillusionment and anger about it comes out in some stories.

Much of the current information about spontaneous healing and milieu therapy related to cancer is rejected by the medical community—mostly because it lacks sufficient scientific backup to convince a doubting physician. Herein lies a problem. Expensive double-blind studies are mostly funded by pharmaceutical companies that hope to discover new miracle cures and thus reap the benefit of enormous profit for their efforts.

The idea of conducting studies on the benefits of eating organic vegetables or participating in exercise programs holds much less potential for financial gain. Still, centers for integrative medicine are emerging in large medical centers and beginning to demonstrate the scientific merit of such practices. David Servan-Schreiber , M.D. Ph.D. who is cited in the nutrition section of the book is the cofounder of such a center in Pittsburgh.

Ms. Fortson interviewed many practicing physicians operating inside and outside of the traditional medical model. Dr. Barry Boyd, author of The Cancer Recovery Plan, is an advocate of integrating life style choices into the treatment plan of each cancer patient—a practice that could increase survival by 40–50 percent in some cases. This, he states, is not thinking out of the box, it’s just thinking inside a bigger box. Yet medical school faculties are reluctant to include such discussion in current curricula. Included as well is the work of Bruce Lipton, MD, Ph.D., who has studied the relationship between emotions, stress, and cancer.

Many successful outcomes are anecdotal or found in obscure studies. Why, for example, did a lung cancer patient whose decision to spend his last days smoking heavily suddenly go into remission and remain cancer-free? Why, when each of us has cancer cells in our bodies, do some people develop the disease when others do not? The same question arose a few years ago about the varying progression of AIDS in similar patients.

We have only begun to scratch the surface of knowledge that will answer these questions. Physicians and survivors like Leigh Fortson should be applauded for having the courage to share their findings. The evidence—both scientific and anecdotal—is increasing daily. Knowledge that is accumulating outside of the medical model of cancer care cannot be ignored. The reader may not come away convinced, but can and should remain open to considering what is written.