The Ecstasy of Influence 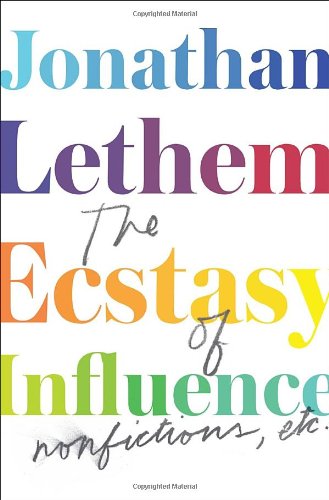 “The Ecstasy of Influence is a book worth reading—it redraws the map of popular culture and, in so doing, pushes us beyond the confines of our comfortable minds, out into the larger world where together we can fulfill our full, collective, creative potential.”

Oct. 6, 2004: I met Jonathan Lethem today, but I accidentally made somewhat of an ass of myself. We were in the elevator together, just the two of us. I said, “Hey! Are you Jonathan Franzen?”

Then I got nervous and told him I was a big fan. To prove it, I tried to name some of his books, but my mind went blank. Then I remembered a couple and started blurting out the titles. I felt like English was my second language. I apologized, and he said not to worry. He didn’t mind.

Later, I went to listen to his lecture. It was quite good. He talked about the need for authors to make writing a part of their lives, not to put on airs of being tortured. We should be comfortable when we write.

He quoted Flaubert, something to the effect of “A writer must be extremely bourgeois in life in order to be revolutionary in writing.”

I asked a question about working on more than one project at a time. He said that every project needs a writer’s full attention. If you’re going to commit to a side project, you should put the main project aside and know that you’re losing momentum with it before starting the other one. Only start a side project if you’re really moved to do so.

2.
In line with my overwhelming and irrational desire to connect myself to the famous and nearly famous, I’ve been telling versions of the elevator story for years. But what gets me as I reach the conclusion of Mr. Lethem’s The Ecstasy of Influence is that the guy was lying to me when he answered my question. Or at least that he wasn’t practicing what he preached. Or, at the very least, that he was really moved to set aside major projects on more than a few occasions, because many of the side projects in this collection overlap with his more recent novels You Don’t Love Me Yet and Chronic City.

To be fair, the profusion of essays collected in The Ecstasy of Influence may explain why Mr. Lethem’s novelistic output has slowed somewhat since the 1990s: with the critical and commercial success of Motherless Brooklyn, he went from being what he describes as a termite gnawing at the corners of the literary scene to a white elephant nobody could ignore.

And with that transformation, apparently, came many invitations to contribute a foreword to this or that volume of literature, and opportunities to write think pieces, reviews, and profiles for various magazines. In Mr. Lethem’s words, “I said yes to things for ten years.” Indeed, this book might just as easily been called Things I Said Yes To: What I Was Doing When I Wasn’t Writing Novels, though The Ecstasy of Influence has an admittedly much better ring.

The title is a play on Harold Bloom’s The Anxiety of Influence, an academic tome arguing, more or less, that the work of past masters can only cow latter day poets into writing inferior poetry. For Mr. Lethem, however, nothing could be further from the truth. As a writer, he revels in the work of his forebears—so much so that the collection’s eponymous essay is a patchwork of clever things that other people have said.

His point (in this instance, anyway) is that the free appropriation of art (known to some as “sampling,” to others as “plagiarism,” and still others as “stealing”) benefits society in general and artists in particular more so than the strict enforcement of copyright laws. Then again, as the author notes later in the book, at least one of the people whose work he appropriated offered a caveat: Lawrence Lessig, himself a proponent of relaxing copyright restrictions, wished Mr. Lethem had at least the good grace to use quotation marks to set off other people’s words.

3.
Perhaps chief among the writers to whom The Ecstasy of Influence owes a debt is Norman Mailer, whose ghost doesn’t haunt so much as possess this book. Early on, Mr. Lethem gives a nod to Mailer’s Advertisements for Myself by joking that his own book would have been called Advertisements for Norman Mailer if not for the perspicacity of his editors. Like Mailer’s book, Mr. Lethem’s is a fairly massive collage of essays and fiction linked together with commentary from the author.

Yet if he were a little more honest, Mr. Lethem might have dwelled a little longer on the debt his book also owes to Kurt Vonnegut’s Palm Sunday, might, if he were extremely honest, have gone on to describe The Ecstasy of Influence as Vonnegut described Palm Sunday—as a blivit, or two pounds of shit in a one pound bag.

This isn’t to say that The Ecstasy of Influence is shit, at least not in the pejorative sense. It’s more like shit in the colloquial sense, as in, “We shot the shit,” or, “That shit’s fucked up.” Or, in the words of my plumber when he found out I was an English teacher, “So, what, you teach Shakespeare and shit?” It’s also to say, borrowing the argot of my college days, that Mr. Lethem’s writing, at least when he’s at his best, is the shit.

4.
Is this to say that Mr. Lethem is always at his best in The Ecstasy of Influence? No, but he also has the good sense to put on airs of self-effacement throughout the volume; like any good essayist, he anticipates objections long before they can be lodged.

The book is a bit pretentious? Sure, Mr. Lethem all but admits in an essay about Philip K. Dick: “My ears prick up at the word ‘pretentious’—that’s usually the movie I want to see, the book I want to read, the scene I want to make.”

The book feels like a hodgepodge of lesser-known works that Mr. Lethem pasted together? No problem. Describing the early stages of his writing process, he writes, “I glue shit together and stare at it, wishing for my book. I like glue.”

He kind of comes off as a know-it-all? “The truth is, nothing about what I do qualifies me to write about this and that, and it is probably only dangerous that my practiced employment of the tool of language makes my personal opinions decant from my brain so readily.”

The author could have been more selective in deciding what to include? Count your blessings. The book could have been longer. In his preface, Mr. Lethem notes, “I left things out. There are pieces I liked that didn’t fit, just as some pieces that seemed pretty weak went in because they did fit.”

5.
The Ecstasy of Influence does, in fact, go on and on. Early on, Mr. Lethem comes across as the smart guy who lived down the hall from you in college, but as the shit piles up, you remember why you rarely hung out with him: The guy’s on another Norman Mailer jag? I think I’ll watch some Oprah.

By far the longest piece in the collection is a profile on James Brown. It’s 40 pages long and originally appeared in Rolling Stone. In it, Mr. Lethem pits James Brown the legend against James Brown the man, and comes away with a portrait that’s both reverent and human.

But does it need to be 40 pages long? Yes and no. Yes if you’re really into James Brown, or even if you’re curious about the peculiar side effects of charisma and fame. No if you’re not particularly interested in knowing that Mr. Lethem left the recording studio for takeout barbecue while the Godfather of Soul worked on vocal arrangements with his backup singers, or that Mr. Lethem sees James Brown as being akin to Billy Pilgrim, the “unstuck in time” protagonist of Kurt Vonnegut’s Slaughterhouse Five.

Personally, my favorite story about James Brown comes from my father. It weighs in at just under 60 words, and it goes like this: “When I was in college, I went to a James Brown concert up in Scranton. There were ten people in the audience, and before the show, James Brown came out and said he didn’t care how many people were in the audience—he was going to perform like there were a thousand. And that’s what he did.”

Ultimately, this is also what Mr. Lethem is doing throughout The Ecstasy of Influence: giving the performance of his life even though the nature of the book might preclude a large audience, or might even alienate those who fell in love with novels like Motherless Brooklyn or The Fortress of Solitude.

He’s riffing on pop culture, experimenting with ideas and language, and exploring the uncharted reaches of the American imagination with all the gusto and unbridled enthusiasm of the Hardest Working Man in Show Business—keeping at it until someone in the wings has the decency to throw a cape over his shoulders and usher him off the stage.

And when, two encores later, he disappears from the stage for good, you close the book and kind of wish you’d kept in touch with that smart guy down the hall—or at least hung out with him a little more—because he was earnest and funny and a little bit crazy, and he never doubted that you were equal to the conversation.

6.
Again, from the pages of my journal:

October 7, 2004: Saw Jonathan Franzen-Lethem again tonight. He read a story that had been published in the New Yorker called “Super Goat Man.” He also mentioned that a character in Motherless Brooklyn named Frank Mina was named after his grandmother, Mina Frank. When people would switch her first and last names and call out for “Mr. Mina,” she would respond, “That’s no misdemeanor, that’s a felony!” Again, he struck me as a very nice and friendly guy, and he made me wish I had more time to write fiction.

Ultimately, this is why The Ecstasy of Influence is a book worth reading—it redraws the map of popular culture and, in so doing, pushes us beyond the confines of our comfortable minds, out into the larger world where together we can fulfill our full, collective, creative potential.