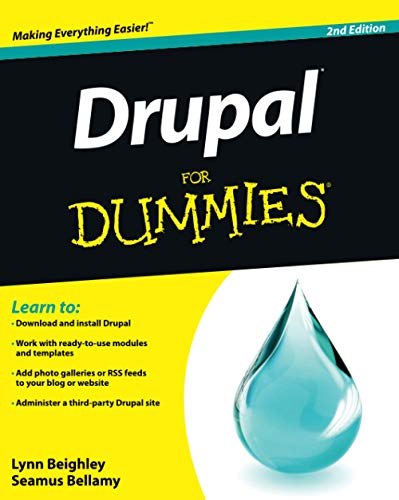 “For that tiny percentage of readers who build their own computers, shamelessly reduce tech support drones to puddles, and know just enough to be, well, dangerous, this may just be the book for you.”

Drupal for Dummies is not for the technologically faint of heart.

The ubiquitous For Dummies series, with titles that cover nearly every human endeavor, are portrayed—as is implied by the series moniker—as guides for the everyman. Indeed, Child Psychology and Development for Dummies, another title in this series, compared to Drupal for Dummies, is most likely a breezy read that will equip parents with far simpler skills to flawlessly navigate the raising of children and adolescents as model young citizens and scholars.

Drupal for Dummies begins with great promise. Early on the authors assert, “Even if the rest of your life is an out-of-control mess, you can rest assured that your Drupal website will be exactly the way you want it.” Yet two pages later the authors caution the reader that, “Drupal administrative menus are not intuitive.”

This is indeed an understatement.

But what is Drupal? No doubt if you are reading this review, “Drupal” is not a foreign word. But for those dipping their toes into the building of a website, it is a content management system or CMS. Wikipedia, the perfect source for an online topic, ably enough defines a content management system as “a system providing a collection of procedures used to manage work flow in a collaborative environment. These procedures can be manual or computer-based.” This is a truncated version of the definition that only grows more complex as it further elaborates.

If you are already lost: Run. This book is not for you.

Just a few pages further into Drupal for Dummies its authors write, “Installing Drupal is the worst part of the Drupal experience . . . If you’re stuck doing it yourself, prior to beginning, we suggest you turn on the calmest, happiest music you own. Turn down the lights, maybe buy some candles. Find yourself a happy place.”

And so for those looking for a user-friendly website building tool that requires no tech-savvy orientation—your numbers probably round up to 100%—there are oodles of far more simple tools available, whether you look to Google Websites, the same company’s Blogger, or any number of other web dynamos, industry associations, or out-of-the-box solutions. In any of these venues, you will likely encounter minor glitches, but will build a website replete with individually chosen templates, functions and flourishes all uniquely combined and wallpapered. Custom built? No. Providing as many functions as Drupal? No. But at least you’ll be able to actually build it yourself. And when something goes amiss, you’ll most likely muddle through without the assistance of a $150/hour developer.

For that tiny percentage of readers who build their own computers, shamelessly reduce tech support drones to puddles, and know just enough to be, well, dangerous, this may just be the book for you. With an amateur skillset built over years of determination to turn the tables on Microsoft, HP, and Dell, and master the smooth running of your PC, this book will be a gala event.

Difficult to install? Carefully following the authors’ instructions you’ll howl at the moon, delighted by your latest technology triumph. And you will be able to build a better site with a seemingly endless array of functionalities that can be added to it.

And then there is the even slighter percentage of readers who have hired web developers to develop a site that uses Drupal as its content management system. Fervently, you will flip through the pages of this guide to find that, for you, the book is essentially useless. All of the procedures are written for a user who will build the site from the ground up, but someone who has none of the software development skills or knowledge of the developer’s coding language will be unable to go into an already Drupaled site to “fix” it.

Almost inevitably, the non-intuitive menus will have been rendered even more arcane by the tech team that custom built your site. And so there will be little in this book that will provide you with a skillset enabling you to implement even the most modest of enhancements without risk of destroying the fragile code that keeps your site humming. If this describes you, like it does the neophyte, I repeat: Run. For your life.

Ultimately, Drupal for Dummies will be useful for that tiny niche of users who have a way-above-average feel for technology and are up for a challenge as well as the joy of expanding their technology know-how without having to write in techie HTML code language.

But if you are truly a technology dummy, just walk on by.