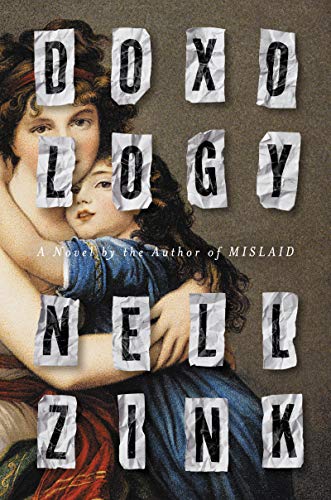 “Nell Zink’s new book, Doxology, may prove both the consummate post-punk post-9/11 novel, and a bracing addition to the noisy Lower East Side literary canon that dates back to Henry Roth’s Call It Sleep.”

Nell Zink is full of surprises. Her first novel, The Wallcreeper—purportedly turned around in a scant four days—recounts a bird-loving couple’s madcap ecoterrorist romp across Europe. The irresistibly overstuffed mock-epic Mislaid chronicles (among myriad other things) the unlikely adventures of a white mother and daughter passing for black in 1980s Virginia. Nicotine delivers a penetrating look inside the smoky confines of an activists’ co-op house in North Jersey, whose squatting denizens espouse a wide array of political commitments but find common cause in defending the rights of 21st century smokers.

Perhaps most improbably of all, Nell Zink’s new book Doxology may prove both the consummate post-punk post-9/11 novel, and a bracing addition to the noisy Lower East Side literary canon that dates back to Henry Roth’s Call It Sleep.

Doxology documents a little more than two decades in the lives of an unorthodox and accidental family that begins in an illegal Chrystie Street apartment sandwiched between a convenience store and a jewelry factory, with a three-piece band called Marmalade Sky, and friendships forged against the backdrop of Stiff Little Fingers records and CNN’s non-stop reporting of Operation Desert Storm.

Marmalade Sky combines the wayward talents of guitarist Pam Bailey, a D.C.-born high school dropout and runaway with a daytime gig as a gifted computer programmer, a Minor Threat fixation, a radiation head haircut, and a vision of artistic possibility in the punk movement that all her precocious experience in it has failed to affirm; putative drummer Daniel Svoboda, a Wisconsin-born lapsed evangelical Christian who works nights as a proofreader but dreams of managing a band and starting a label; and Joe, an irrepressibly goofy force of nature with no inhibitions, sense of boundaries, or shortage of cockeyed new songs, which spring out of him in a haphazard frenzy throughout the day.

Their story goes sideways when Pam and Daniel get involved, Pam becomes pregnant, and Joe scores a kooky solo hit single that catapults him to mid-’90s indie-rock stardom. With plenty of money and little to do but spin out more songs and contend with the attentions and demands of his calculating junkie girlfriend Gwen, Joe becomes babysitter and constant companion to Pam and Daniel’s daughter, Flora, which is a natural role for him (if not an entirely safe one for a baby) since Joe is in so many ways a child himself.

What makes Doxology inimitably and unmistakably a Nell Zink joint is the unflagging energy and unerring discipline of the writing, and the astonishing perceptiveness and precision of Zink’s vision of the world she creates, which is often mind-bogglingly precise and expansive in its geo-political sweep, and witheringly comic all at once.

It’s almost impossible to pick a favorite example of this, but here’s one, explaining why Daniel, the son of born-again Racine, Wisconsin, dairy farm workers, can be “forgiven” for reinventing himself in New York as an eighties hipster: “The eighties hipster bore no resemblance to the bearded and effeminate cottage industrialist who came to prominence as the ‘hipster’ in the new century. He wasn’t a fifties hipster either. He knew nothing of heroin or the willful appropriation of black culture. He was a by-product of the brief, shining moment in American history when the working class went to liberal arts college for free . . . An eighties hipster couldn’t gentrify a neighborhood. He wasn’t gentry. His presence drove rents down. His apartments were overpopulated and dirty. Landlords were lucky if he paid rent. He wasn’t about to seize vacant lots for community gardens or demand better public schools. All he wanted was to avoid retiring from the same plant as his dad.”

Zink’s acute understanding of New York City as an intricately layered residential, social, political, and occupational world always in flux remains in evidence throughout Doxology, never more so than in her portrayal of the city in the moment and the immediate and long-echoing aftermath of 9/11. The instant displacement and permanent personal tragedy that the event engenders in the lives of Pam and Daniel and Flora and Joe splits the novel into before and after, as the attack did in so many lives.

The transition effectively and unexpectedly propels Doxology into Flora’s story, into a dramatically different and more stable childhood in Washington, DC, than the postpunk one she began in New York. It sets her on course toward a future of frustrating commitment to changing a world that merely paralyzes her parents in a perpetual state of irony and detachment, particularly as post-9/11 political opportunism ushers in senseless and cynical war: “Too disaffected to defend their own ideals, too idealistic to admit their mercantilism, their perspective hemmed in on every horizon by the almighty dollar, they were credible to no one.”

Without disrupting their self-sustaining workaday lives, Pam and Daniel’s inchoate disaffection leads them back into a particular vein of music—“industrial pastoral”—that gives it diffident expression.

Meanwhile Flora grows to adulthood with her grandparents in DC, with increasingly single-minded dedication to a career goal of keeping “global warming under two degrees Celsius,” and improving “the ecology of developing nations, not places already despoiled past saving.” Her commitment initially leads her to a UN mission in Ethiopia and mostly demonstrates just how much of the world aspires to despoiliation.

Such bleak assessments aside, Doxology remains, at heart, the story of a family bound by affection and fascination that’s no less genuine than the series of accidents that initiates it and binds it together. Doxology admits more warmth and intimacy than any Zink novel to date, without sacrificing an iota of the clear-eyed candor that continues to define her work.