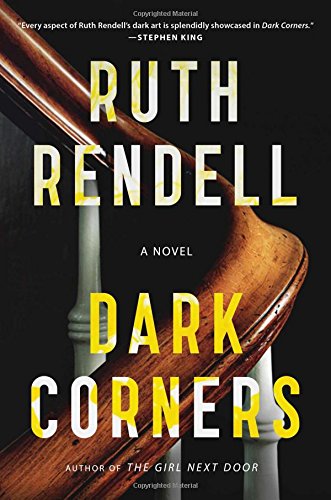 Ruth Rendell’s career as a crime and mystery writer is superbly capped with this, her final novel. Rendell has used her wonderful knack of taking everyday, plausible situations and turning them into dark and tormenting thrillers to great effect with this tale of 23-year-old Carl Martin, who inherits a desirable property in London from his father.

The story opens with Carl moving in and failing to get rid of his father’s collection of jars and sachets of medicinal potions as he “couldn’t be bothered.” He had more important things to consider: his girlfriend, Nicola; his newly published first novel Death’s Door; and letting the top floor of the house to supplement his meager writer’s income.

Ominously, our narrator explains at the outset that If he had known how these largely homeopathic remedies “or one particular item among all the rest, would change his life, transform it, ruin it, he would have . . .  dumped it (all) in the big rubbish bin.”

We recognize from the outset, then, that Carl is something of a slacker, always ready to take the easy option. When he advertises the desirable rooms, he agrees to accept the first applicant to be his lodger, despite some 20 prospective tenants. There is no other reason for inviting Dermot McKinnon into his home other than the fact he couldn’t be bothered to interview the others.

Church-going Dermot initially appears to be the perfect tenant, keeping to himself and paying rent on time. But the reader is already second-guessing that Carl has made a decision he will come to regret: a door found unexpectedly open in Carl’s property, a day or so delay in paying the rent—all the little hints and signs begin to build a looming sense of dread.

Despite the rent, Carl finds himself running low on cash after an expensive trip away with Nicola, who has now moved in with him. When an old friend and moderately well-known TV actress, Stacy, begins to pester him with her woes about gaining weight, he agrees to sell her 50 DNP pills from his father’s motley collection. They are labeled as the perfect way to avoid weight gain, and he happily pockets Stacy’s £50 without bothering to check the drugs out online.

Days later, newspaper headlines announce Stacy’s dead body has been found in her flat. Carl is shocked—and immediately fearful for his own position in all this, rather than the tragic loss of a young woman’s life. He resists the temptation to look up DNP, but Dermott readily fills him in on all the details from the Inquest at the Coroner’s Court, which he has, bizarrely, been to.

The Coroner presumes the drugs were purchased online, recalls Dermott. As Carl ponders the tabloid press front-page headline KILLED BY DNP, Dermott repeats a police officer’s response to the Coroner’s question about whether these drugs are against the law. “Not yet,” came the response.

Carl’s predicament comes to a head when the next month’s rent from Dermott is due, and he refuses to pay: ever again. Dermott reveals he knows Carl sold Stacey the tablets and will to talk to the press about what he knows unless he lives rent-free.

From this point, Carl’s life begins to implode with Dermott’s lady-friend coming on to the scene, his relationship with Nicola breaking down, and the inevitable “writers’ block” stymying him. A savage act only worsens matters until finally Carl is forced to decide whether to save his sanity or his liberty.

What is fascinating about this story is that Carl’s fear of “trial by tabloid” rather than the force of the law prompts his downfall. It is repeatedly made clear he has broken no laws, yet he cannot risk dismissing Dermott’s blackmailing. His concern is not for the loss of Stacey’s life, but for the hounding he might expect from the press—and his own circle of contacts—for what he has done. It says a great deal about society’s values and how lives are lived through the screen of a smartphone and a hungry, rolling news service.

There are other strands to this story that Rendell skillfully weaves together. The bus-riding father of Stacy’s cuckoo-like friend, Lizzie, who sneaks into her vacant flat, shoes, and life, is a little bizarre; though entertaining, these threads are at times a distraction from the darkening main theme.