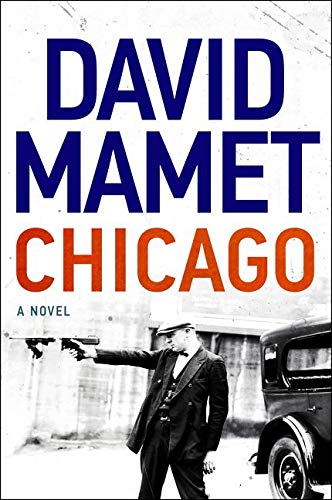 Mike Hodge, a reporter with the Tribune in 1920s Chicago, sets off on a quest to find the person or persons responsible for the murder of his girlfriend, Annie Walsh. Accompanied by Parlow, his friend and fellow journalist, Hodge follows leads wherever they may take him: into speakeasies, whorehouses, and the company of gangsters of varying ethnic heritage. His belief that he caused Annie’s death, and the burden of guilt that accompanies it, won’t be relieved until he finally learns the truth.

David Mamet is a highly-decorated author, having won the Pulitzer Prize for his play Glengarry Glen Ross. He also received Oscar nominations for his screenplays for The Verdict and Wag the Dog. In addition to his plays, he has also written three novels and 14 books of nonfiction.

Chicago, then, arrives with great anticipation. Unfortunately, it fails to deliver. Billed as a thriller, it simply isn’t. The plot travels very little distance from beginning to end, it has a lot less to do with prohibition than expected, there’s rather more circular repetitiveness in Hodge’s thought processes than one would prefer, and, with all due respect to the author, at times the novel is just plain boring.

One of Mr. Mamet’s identifiers is his masculine, hard-boiled point of view. His story appeals to a certain set of readers who like the rough and unsophisticated ethos of noir. He works a lot of talk about sex into his scenes, much of it unpleasant and obscene, and he includes a number of sex trade workers in his cast of characters.

For readers who don’t belong to the David Mamet fan club, it comes off as contrived and forced after a while. The prostitutes and their madam, Peekaboo, are flat characters who are tired and world weary, a mood that soon transfers to the reader as Hodge returns again and again to their house of business, seemingly working the same ground over and over again.

The author is famous for his “Mamet speak,” a distinctive style of dialogue that is intended to be snappy, smart-edged, and cynical. His narrative technique relies heavily on long bouts of this kind of interchange between characters, and Chicago is no exception.

The early chapters, for example, feature long conversations between Hodges and Parlow. As two journalists, they love to talk, and apparently they love the language. Why use 10 simple words to say something if you can use 30 fancy ones? The problem is, Hodge and Parlow have almost identical speech patterns, and it’s often difficult to tell which one is saying what. Worse, their speech fails to differentiate them as characters. If you were walking down the sidewalk behind them, listening to them talk, you’d think they were identical twins, finishing each other’s sentences and competing for the verbal upper hand:

“He was tight,” Parlow said.

“He was tighter,” Mike said, “than Woodrow Wilson’s ass.”

Another problem caused by “Mamet speak” is that it’s so stylized it just plain gets in the way of his story. It’s so convoluted and “literary” with its double negatives, allusions, and inferences that at points the reader hasn’t a clue what the narrator or the characters are talking about. Additionally, the author always feels the need to reel in the “literary” stuff with a healthy dose of obscenity, usually at the end of a speech where it topples out with a pronounced bathetic fall from the intellectual to the coarse:

“He speaks in the rhythmic cadences of a Cicero,” Mike thought, “of course he likens our jury system to a Roman contest of guile. He is the gladiator. What is his sword and shield? A soft demeanor, a glib tongue, and a total crock of shit.”

That kind of writing from an unpublished hopeful, slipping their manuscript over the transom, would never see print, but for David Mamet it’s merely another day at the keyboard.

Whether or not you will enjoy reading Chicago comes down to a matter of taste more than anything else. If you like this author’s style of writing and don’t mind a thriller that skimps on action and is short on insight, historical or social, you might as well plunk your money down and take your chances. If you’re not already a fan, however, and you’re considering this novel based on the time period and the promise of a mystery to be solved, you might want to think twice.