The Case of the Vanishing Blonde: And Other True Crime Stories 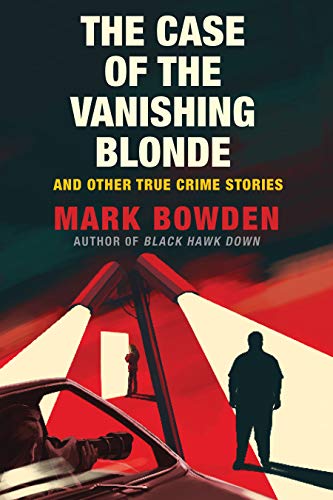 “The Case of the Vanishing Blonde is excellent work from a true master of the craft. These punchy crime stories are told with few frills and no romanticism.”

True crime is all the rage right now. From Tiger King to a million podcasts, true crime is feeding a voracious appetite across the country for stories of real blood and guts. Is the genre exploitative? Absolutely. True crime allows consumers to peek into the visceral world of homicide from a safe distance and without having to empathize with victims. The Case of the Vanishing Blonde and Other True Crime Stories by Mark Bowden acknowledges this reality, but nevertheless churns out several excellent pieces of true crime reportage.

Bowden, one of the best and most celebrated practitioners of long-form journalism, is best known for books like Black Hawk Down and Killing Pablo, both of which focus on the murky world of special military operations. The Case of the Vanishing Blonde is a return to Bowden’s roots as a true crime specialist, as the book contains six stories that range from 1983 until 2019. Each saw prior publication in outlets like Vanity Fair, the Philadelphia Inquirer, and Air Mail. Every story also deals with more mundane crimes rather than the usual stuff of true crime bestsellers (serial killers, conspiracies, unsolved cases). However, this does not mean that The Case of the Vanishing Blonde is pedestrian or boring. Far from it, in fact.

The first story, “The Incident at Alpha Tau Omega,” is an incredibly contemporary piece about a gang rape at a fraternity house. The essay includes details familiar to all literate Americans in 2020: stock images of sexually depraved fraternity brothers, hazy definitions of rape, illicit substances, and a virtual civil war on campus between top-level administrators and more feminist-minded bureaucrats. The odd thing about “The Incident at Alpha Tau Omega” is that it all happened in the early 1980s, thus Bowden shows just how long this issue has simmered on American campuses.

The titular essay, as well as “The Body in Room 348” and “Who Killed Euhommie Bond?” feature South Florida private investigator Ken Brennan, a native New Yorker and DEA veteran who Bowden always describes as “deeply tanned,” handsome, and sporting a “solid-gold chain around his neck.” Bowden makes a hero out of the straight-talking Brennan, who is shown solving three tough, almost impossible cases in Florida, Texas, and Tennessee. “The Case of the Vanishing Blonde” is the best essay in the book because of Brennan’s discovery of how a serial rapist managed to move the body of his victim without causing suspicion. “A Million Years Ago” is sure to be a winner of with current audiences as it discusses the issue of police corruption. It is also a glowing endorsement of cold case detective work.

The Case of the Vanishing Blonde is excellent work from a true master of the craft. These punchy crime stories are told with few frills and no romanticism. Bowden does not indulge in the usual salacious tripe of other true crime scribes. Rather, as he shows in every essay in The Case of the Vanishing Blonde, Bowden is concerned only with meat and potatoes. These essays are just the facts, and what great facts they are.