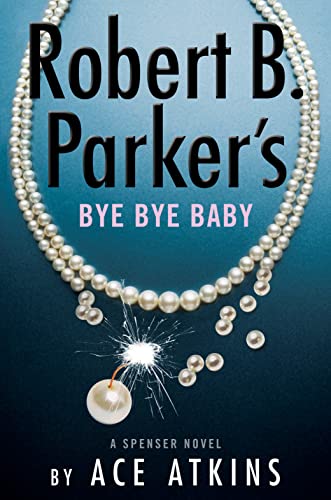 “That afternoon, I was dressed appropriately for the dog days of summer. A lightweight khaki summer suit, white linen shirt, and polished wingtips sans socks. I caught a glimpse in the office window and thought I might give George Raft a run for his money.

“‘May I help you?’ the receptionist said.

“Despite my stunning entrance, the woman had yet to look up from her computer screen.”

With Bye Bye Baby, the 50th book in Robert B. Parker’s Spenser series, Ace Atkins brings us the dialogue, characters, and humor fans have been enjoying for decades. Spenser, joined by Hawk, Henry, Sixkill, and, of course, Susan, work and talk through Spenser’s latest case, sparing none of the usual witty banter and Spenser’s quips.

“I drove downtown and met Hawk at the Harbor Health Club for an early-evening workout. We followed a new plan that combined pounding the heavy bag, jumping rope, and multiple bodyweight exercises. As we hit the fourth round, Hawk made this set of twenty pull-ups as effortless as his first.

“‘Speak for yourself, John Alden.’

“‘You hard to understand,’ he said. ‘Breathing that hard.’

“I followed his lead and performed the pull-ups. He was right. It wasn’t as easy as it used to be, but I acted as if I might perform twenty more.”

Along with these familiar elements readers will find a story rife with contemporary issues and narratives that could be coming directly from their news feeds. With the tumultuousness of the past five years in America, Atkins spins the political and social turmoil of a newly energized white supremacist faction of the country into a case for Spenser to solve. Spenser is brought on staff for Carolina Garcia-Ramirez, a young, progressive, congresswoman of color fighting for her district and her people. Others, notably her primary competitor, want to see her out of the race, and feel no compunction to act in a respectable manner.

“’I’ve had haters on me since I announced my candidacy,’ she said. ‘They more than doubled when I got enough signatures to be on the ballot and went off the charts when we actually won. I’ve been called a wetback, a nigger, a dyke bitch, a whore, and a communist. What I’m saying is that I don’t care. I don’t worry about the threats, because this bitch is too damn busy getting work done.’

“‘People are threatening to physically harm you?’ I said.

“The congresswoman started to laugh so hard she nearly did a spit take with the water.

"‘Physical harm?’ she said. She looked over to Kyle Rosen and shook her head. ‘Are you fucking kidding me? They want to kill me in so many different ways.’”

Spenser, despite the congresswoman’s hesitation about appearing weak in front of her constituents and competitors, agrees to work protective detail and do what he can to dig up the root of the hate-filled messages. He soon finds himself embroiled in white supremacy groups, dysfunctional family units, and, as he often does, the mob. Together, he and his friends work and fight together, searching for answers on the side of democracy.

Ace Atkins, hand-picked by the Robert B. Parker estate to carry on Spenser’s legacy, doesn’t disappoint. The pace, wordplay, and character interactions make for a fun and entertaining read, and the issues dealt with bring to mind the manner in which Parker himself dealt with political issues from the 1970s onward. New readers who enjoy a quick, funny, relevant read will also like the book, even without background knowledge. Highly recommended for Spenser fans and any reader who enjoys witty dialogue, detective fiction, or contemporary themes.