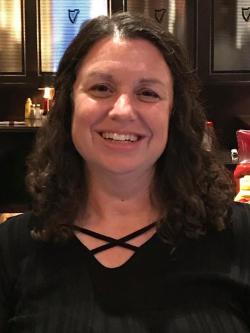 Judy Clemens' books in several mystery genres include the Agatha- and Anthony-nominated Stella Crown Mysteries. Her most recent book is Beyond the Grave (Poisoned Pen Press, 2018), the fifth in the Grim Reaper Mystery Series. She also wrote the standalone Lost Sons (Herald Press 2008), as well as the Agatha- and Anthony-nominated YA thriller Tag, You’re Dead (Poisoned Pen Press, 2016), which was published under the pen name J.C. Lane and translated into Turkish (Bilgi, 2018).

She is a playwright and essayist, with short stories in multiple publications, including Bound by Mystery (Poisoned Pen Press, 2017). She is a past-president and active member of Sisters in Crime, whose mission is “to promote the ongoing advancement, recognition and professional development of women crime writers.” She is also an active member of Mystery Writers of America and the Society of Children’s Book Writers and Illustrators.

Ms. Clemens has a degree in theater and has worked as an Equity stage manager, mostly in Philadelphia, Pennsylvania. She now lives in a century-old farmhouse in rural Ohio, where she bakes, goes for runs, and attends many soccer games. She enjoys reading, vacationing in Wildwood, New Jersey, attending Grace Mennonite Church, and spending time with her family.

Beyond the Grave (Grim Reaper Series, 5)

The Day will Come

To Thine Own Self Be True (Stella Crown Series)

The Last Housewife: A Novel

“As an exploration of misogyny and violence, this story hits with relevance and a timely anger.”

“Barton’s story is magical and deep, and within this beautiful story hope and help can be found.”

The Half Sister: A Novel

“Jones moves the story along at an intriguing, fast pace, making for an entertaining, fun read. Recommended for all who enjoy twisty thrillers and clever, smooth writing.”

The Collective: A Novel

“The Collective is a heart-pounding thrill from beginning to end. . . .

In the follow-up to their 2019 book I’m Not Dying with You Tonight, Kimberly Jones and Gilly Segal bring us two teenage best friends, both on the competitive cheer squad.

You Can Never Tell: A Novel

Kacy Tremaine and her husband Michael have escaped a bad situation in New Jersey, where Kacy was betrayed by her best friend and lost her job and future in the art world.

In My Dreams I Hold a Knife

Jessica Miller is returning to Duquette University, her southern, elite school, ten years after graduation. She is determined to show she is successful, beautiful, and, well, perfect.

“captivating, thoughtful, and tense, a great read for those who enjoy psychological thrillers and complex puzzles. Highly recommended.”

Gimme Everything You Got

“The first day I ever gave a shit about soccer was September 4, 1979—the day that Mr. McMann showed up at Powell Park High.

You Say It First

Meg and Colby come from different worlds. Meg is academic and upper middle class, with divorced parents and an almost sure acceptance to Cornell.

Seasons of the Storm

“Seasons of the Storm is a unique, fresh love story with the feel of a fantasy.

Bookish and the Beast (Once Upon A Con)

“Poston’s loose adaptation of Beauty is enjoyable, moving, and easy to read, like eating a smooth, sweet bowl of ice cream.”

“Highly recommended for anyone who enjoys fictional technology, smart characters, and pages that practically turn themselves.”

Where the World Ends

“Where the World Ends is a beautiful, sorrowful, poignant book with deeply drawn characters, a chilling atmosphere, and waves of emotion. Highly recommended . . .”

When the Stars Lead to You

“When the Stars Lead to You holds a diverse cast of characters and deep discussions about mental illness, race, and sex.”

The Year We Fell from Space

Into the Crooked Place

"This book is highly recommended for anyone who enjoys fantasy, magic, complex relationships, and family dynamics.

Our Year in Love and Parties

“the writing is smooth and the story compelling, making it a fun, quick read.”

“Project Middle School is an engaging, thoughtful book examining many of the emotions of the beginning of middle school.

Where She Went: A Novel

Takes One to Know One: A Novel

“Isaacs’ writing is clever and funny, with laugh-out-loud moments and strong character development.”

“Fan the Fame is smart, fun, and touching.

I'm Not Dying with You Tonight

“‘If you had a nice boy, there would never be a need to lie.’

A Dress for the Wicked

“This book is highly recommended for anyone who enjoys smart plots, fashion, historical fiction, and a varied group of fascinating supporting characters.”

The Arrival of Someday

“emotional, heartfelt, and moving. Lia and the people in her life are relatable and loving.

“Past Perfect Life is gripping, touching, and raw. . . . Highly recommended for teens, and any adult who enjoys a well-drawn story.”

Pan's Labyrinth: The Labyrinth of the Faun

“dark and violent, while also beautiful. The protagonist is a young teen, but the themes are harsh and painful. The fantasy aspects allow the darkness to come to life . . .”

Call It What You Want

“does not try to say exactly what is right and wrong in how we view the world, but shows that to every answer there is a question.

The Exact Opposite of Okay

“funny, touching, and thought-provoking. Izzy is likeable and real, while the story studies both her good characteristics and her flaws.

The Rest of the Story

“Dessen gets it right yet again with her trademark lovable and interesting characters.

“Virtually Yours is a fun book with diverse characters, questions that plague many teens, and the separate worlds of home and college.”

Sorry for Your Loss

“Sorry for Your Loss is a beautiful, sad, humorous book that traverses the deep and debilitating world of sorrow.”

Again, but Better: A Novel

“Again, but Better is a fun idea. Who doesn’t like a love story with time travel and a chance to do things over again—and do them the right way?”

“The Missing Season is a creepy read, thrilling, fast-paced, and spooky. . . . There is much to entertain, and much to send shivers up your spine. . .

The Red Scrolls of Magic (The Eldest Curses)

“Those who have been waiting a long time for this new addition to the Shadowhunters series will be thrilled with the story brought to them by Clare and Chu.”

“This book will appeal to teens—or adults—who like dark murder mysteries with just a touch of supernatural terror.”

“Anyone looking for a deep, thoughtful story about love and life and coming of age will enjoy the relationships, the search, and the lovely magic that may or may not be a part of every pers

“Four Dead Queens is entertaining from start to finish.”

The Plotters: A Novel

“Un-su Kim takes us on a ride, but a ride with both action and contemplation. Highly recommended.”

When the Truth Unravels

“Snow weaves her way around so many complex issues that teenagers face, and does it with kindness and a sense of love for what teens deal with.”

Life in a Fishbowl

When 15-year-old Jackie Stone’s father is diagnosed with a brain tumor, it sends her into a tailspin. Her father is her world.

“The characters are well-drawn and compelling, the story dark and disturbing, but also redeeming.

“Harper’s writing is beautiful and descriptive.

“The Unteachables is a lively, feel-good book.”

An Elderly Lady Is Up to No Good

“Tursten’s writing is witty and sharp, humorous and edgy. The stories read quickly and easily . . .”

“Pandian paints a lovely picture of relationships throughout the book’s mystery of greed and violence.”

“Teens who are feeling out of place, struggling to find their place in a new school, wondering where they want to go to college, or dealing with dating issues should find the book both fun

“the story is one of love, trust, and risk—all three of which must be found in order to make life work in all its messiness.

You Are The Everything

“This book is a study, a narrative, a poem of what life means when you have to deal with the guilt and the pain of being a survivor. . .