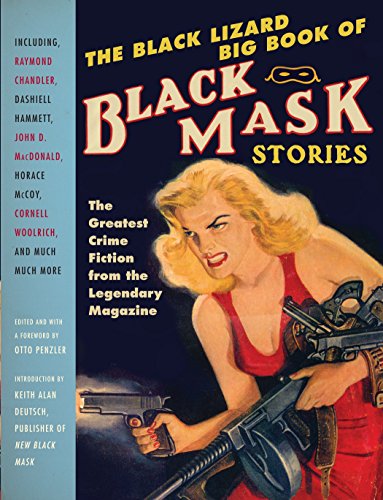 American Edgar A. Poe may have “invented” the detective story with “The Murders in the Rue Morgue” and its sequels, but it was mainly a British form into the 1930s. Yes, there were some Victorian French crime writers (Gaboriau, Vidocq) and a handful of talented Americans early in the game—Futrelle, S. S. Van Dine, and Queen—who imitated the Brits. But the hard-boiled detective story that emerged in the 1930s was authentically American.

By this time, the work of Dashiell Hammett, Raymond Chandler, and James M. Cain muscled aside the dainty golden-agers. Tough-guy fiction matured from adolescent entertainment in cheap pulp magazines to a status of important social literature. With the hard-boiled story, the drive and innovation of the detective genre moved from Britain to America. The roughness and realism was presented stylishly, and so the detective story moved up from middlebrow amusement into the realm of mainstream literature. And hardly anything was more responsible for this than The Black Mask Magazine.

In The Black Lizard Big Book of Black Mask Stories, anthologist and Mysterious Bookshop owner Otto Penzler has gathered a monumental collection of short stories, novelettes, and novels published in that influential pulp from 1920 to 1951. It isn’t the first anthology devoted to fiction from Black Mask but surely the most comprehensive and important. It is a sequel, of sorts, to The Black Lizard Big Book of Pulps (Vintage, 2007), and a long-overdue follow-up to The Hard-Boiled Omnibus (Simon & Schuster, 1946).

It would hardly be possible for any hard-boiled aficionado or academic to find these stories alone. The original magazines are rare; only two entire collections are rumored to exist—one in the Library of Congress and another in private hands. The Special Collections Department at UCLA, as Penzler notes in his Foreword, was helpful in locating rare issues for him.

And so, for the fan, here is this panoramic 1,000 page-plus volume, full of dope heads, gamblers, gangsters, spies, crooked cops, dangerous dames, and, above all, hard-boiled American heroes. They are handy with guns and their fists, demonstrating manly virtues of determination, strength under control, and chivalry.

While there is some variety in their professions—reporters, photographers, cops, sailors and so on—they are all working-class men who work for a living and take lousy, dangerous jobs to make ends meet or to right a wrong. The noir hero, in the words of character Race Williams, is “a middleman, just a halfway house between the cops and the crooks.” Because of this, many of these heroes are isolated, lonely, and cynical. They smoke and drink a lot, yet remain idealistic and a bit sentimental, tough guys with noble hearts. Much of the toughness comes through in the wise-cracking dialog, rat-tat-tat vernacular and street slang. They are street-wise, Eastern, and 20th century urban versions of the Western vigilante who filled 19th century dime novels.

Given the long tenure of the magazine and founder H. L. Mencken’s insistence on high standards, there was a wealth of material from which to choose. Penzler does an outstanding job in discerning which to include. Some choices are no-brainers: the original “Maltese Falcon” by Dash Hammett, for example, is presented in its original serial pieces with nearly 3,000 differences from the contemporary version (not indicated in the text, however) and a sly editor’s notation near the end. Ray Chandler and John D. MacDonald are here, Erle Stanley Gardner, and Cornell Woolrich. But beyond “the usual suspects,” there is a host of lesser-knowns whose work exemplifies the best of this period and this genre.

Any reader, experienced or new to the field, will delight in discovering these mythic tales of America’s mean streets and the no-nonsense people who lived in them. Granted, there is a trace of misogyny and racism here and there. But these can perhaps be forgiven as a sign of their times. In the end, with each story, we celebrate the authentic American hero who does his job, dirty though it is, with honor. Oh, and her job, too: there is one notable female protagonist in the bunch (as you might guess, there weren’t many in the pulps at all).

The author bio/introductions heading each story are helpful and colorful, useful in explaining the range of the particular writer’s career. And the black-and-white illustrations drawn from the magazine lend some visual pop.

If there is a fault in this collection, it is in the organization of the work, which appears haphazard. This academic would have appreciated a chronological order or a thematic order, to trace the historical development of the genre or to synthesize emerging cultural themes of the period that the magazine spanned. But it isn’t a textbook—and thank goodness for that.

The Black Lizard Big Book of Black Mask Stories is an affordable omnibus of entertaining crime stories from a uniquely American magazine that will occupy many a pleasurable evening.