Bang! How We Came to Be 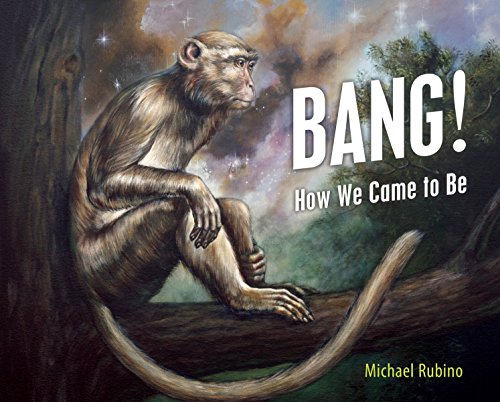 Bang! How We Came to Be is an artistically colorful, interesting and powerful, scientific version of evolution broken down into digestible parts just for children.

Evolution can be a complicated topic to discuss. There are many versions of how we humans came to exist, and the starting point for discussion often hovers around personal belief systems that may or may not have anything to do with Darwin’s theories.

Michael Rubino has retold the theory of evolution simply, for children, adding just enough detail and description to explain what happened without bogging down the story making it too confusing.

The universe began with an explosion we call The Big Bang Theory, and from there, amid cosmic dust and expanding gases, galaxies of stars were born. When the Earth cooled down, further changes occurred. Volcanoes erupted and added to the heat from the sun, allowed single celled organisms to appear, which then proceeded to colonize the seas.

From there these organisms grew and multiplied, becoming more complex physically. As they changed and adapted, spreading across oceans, some developed into fungi or plants, others into animals. Then the animals adapted into other animals, each time more complex and better able to survive their environments, until we ended up with hundreds of thousands of species of both flora and fauna.

These evolutions occurred over vast periods of time, millions of years, in fact—nothing happened quickly—and explaining just that time element to children might be challenging in the hands of a lesser writer or artist.

Mr. Rubino, however, is clearly up to the challenge. He takes the reader on a fascinating journey—all the while adding more detail about the processes organisms went through leading up until the present time. The artwork and illustrations are attractive and purposeful in color, detail, and form. They are charming, expressive, and informative.

What the author has created is a straightforward and shortened version of scientific evolution that children can readily understand. His passionate exposition on his views of science, overpopulation, pollution, and the world’s dependence on fossil fuels is readily apparent, yet his opinions are gently blended into the story, not distracting from the overall message.

Children who have learned about evolution in school will enjoy this abbreviated 64-page book, regardless of other beliefs they may hold about the origins of humankind.