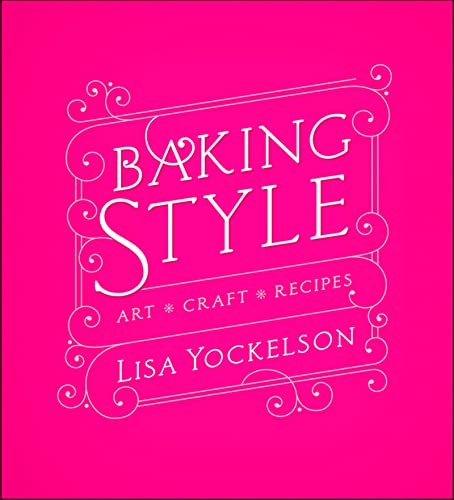 “From the lurid pink cover onward, Baking Style author Lisa Yockelson goes straight for over-the-top . . . For those not put off by the ingredient lists, and not in a hurry to just get to the recipe, the question remains, do the recipes work? Yes, they do. Ms. Yockelson tests thoroughly . . .”

From the lurid pink cover onward, Baking Style author Lisa Yockelson goes straight for over-the-top—and her writing will either delight or utterly irritate its readers. If you’re not inclined to discuss a snickerdoodle in the same rapturous tones as your hottest night of sex ever, this isn’t the book for you. The heavy breathing therein—“butterluscious,” “verynaughty,” “blushing birthday girl,” “streaky, moist, and messy,” “lushexuberant”—simply does not let up. For pete’s sake, we’re talking about rolls and oatmeal cookies here.

One section is headlined “lacking restraint”—a mighty fine candidate for the entire book’s title. The missing restraint isn’t just in the writing: This is also not the book for you if you object to a pound of sugar, nearly a pound of chocolate, 10 eggs, and 4 cups of sugar for a 9-by-13-inch pan of chocolate bars. Or a cup of sour cream, five egg yolks, and ½ pound butter for sour cream rolls, plus another stick of butter and cup of sugar for the streusel that goes on top—all for just 16 buns. And that qualifies as a relatively restrained recipe.

For the reader who finds all that heavenly instead of repulsive, Ms. Yockelson will grab her by the apron and talk and talk like a best girlfriend. (And the reader will, most likely, be a “her”—the pure pinkness of the book—from cover to interior photos to page borders—combined with the old-fashioned, flowery design, aims squarely at girlyness.) The book’s unusual format seems designed to invite readers to dip in and out of the conversation, reading baking essays almost randomly, as one would leaf through a scrapbook.

The book opens with a long section on baking basics, covering ingredients, technique, definitions of baking terms, and equipment. This is followed by the “baking storybook,” in which a few recipes are introduced at a time with an essay; recipes themselves have no headnotes. Thus within each mini-section of essay and recipes, there is some vague organizing principle behind them, but the book does not provide the further overall structure most bakers would expect (such as cakes, cookies, pies). Instead, a peanut butter cookie precedes a cornbread recipe, which is followed by a coffeecake.

A detailed index saves time—but only if, for example, you know you want a chocolate chip cookie recipe. Otherwise, the lack of useful organization may make it hard to bake from the book routinely or on the spur of the moment (for example, roll recipes are scattered throughout, which complicates finding and comparing them).

In many cases, the recipe concepts are nothing unusual—oatmeal rolls, shortcakes and fruit, chocolate chip cookies, Bundt cakes, sugar cookies. It’s the high-impact ingredient quantities that make the recipes stand out: shortcakes, for example, aren’t topped just with peaches and blueberries, but rather with a blueberry sauce, buttered peaches (yes, really), and vanilla whipped cream. Four dozen sugar cookies call for ½ pound butter, 1 cup oil, a cup each of granulated and confectioners’ sugar, and another 2 cups of sugar for dredging the cookies before baking. Given the structure that invites a longer reading to unearth all the spots where, say, a cake recipe may be hiding, by the time a baker finishes that reading, the sheer quantities of butter and sugar may leave her feeling slightly queasy.

But: For those not put off by the ingredient lists, and not in a hurry to just get to the recipe, the question remains, do the recipes work? Yes, they do. Ms. Yockelson tests thoroughly enough and provides adequate instructions (often with little notes about what should be happening as, say, you spread a batter in the pan) to ensure sweet success. For example, a toffee cake, while slightly muted in flavor by its half-pound of butter, emerged from its Bundt pan tall (or, shall we say, buxom?) and fine-grained.

One odd note: For all the detail given here, the emphasis on repeated testing and tinkering with recipes, and the mention of frequent use of a scale in the section on measuring, weights are listed generally only for chocolate and butter, not flour or sugar. Experienced bakers know that the most reliable, easiest route to recipe consistency is through weighing ingredients—and the lack of that information seems especially noticeable in a book as thorough as this.