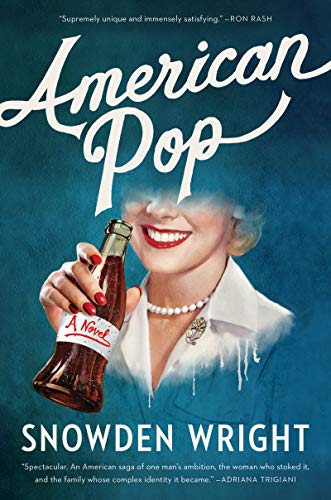 “Though too untethered to a timeline to comprise a traditional rise-and-fall saga, American Pop delivers a wondrously mosaic-like, multigenerational chronicle of a family that builds a soda pop empire from a Mississippi Delta drugstore.”

What makes Play Pretty Blues work is a deftly applied motif of historical inquiry embedded in the narrative, as if the tellers of this inventive, fictionalized take on Johnson’s life and legend were plumbing available research materials and faithfully reporting their findings in Wright’s text.

Though too untethered to a timeline and too peppered with sobering spoilers to comprise a traditional rise-and-fall story, American Pop delivers a wondrously mosaic-like, multigenerational chronicle of a family that builds a soda pop empire from a Mississippi Delta drugstore. Their story spans nearly an entire century, during much of which the Forster family reigns as international cola kings, outstripping even Coke and Pepsi in pop popularity.

There’s certainly a Golden Age of Soda Pop story to be assembled from Wright’s careful research into industry’s history and the Forsters’ journey to the top—analogous to, say, the comic book and luxury hotel arcs illuminated in Michael Chabon’s The Amazing Adventures of Kavalier and Clay and Steven Millhauser’s Martin Dressler. But American Pop is not that book. It’s almost as if Wright’s aim is to interpret rather than tell a story that exists only in his telling.

In a feat of narrative sleight-of-hand that’s every bit as rich in earned gravitas as in sly virtuosity, Wright states his purpose in crafting an exegetic history of this history-making family: “Much has been written, in other texts more so than this one, about Houghton Forster’s willingness to discuss business with his children, no matter their age. He considered it training for their future work, a step toward his goal of creating the nation’s quintessential family.”

There’s a bit of Joseph Kennedy Sr. in Houghton Forster, founder of Panola Cola and exacting patriarch to his brooding brood, and more than a little Kennedy Curse in the misfortunes of his affluenza-afflicted children and grandchildren.

If anything, what makes Houghton Forster’s family quintessential is not Kennedy- or Willie Stark-like ambition, achievement, or hubris, but profound and unerringly relatable personal dissolution and pain, invariably made more burdensome by the family’s prominence.

That said, the Forsters do enjoy some indelible moments, whether it’s teenage soda jerk Houghton’s cocky courtship of his high-born future wife, Ramsey Forster’s thrilling affair with Josephine Baker in the fleeting days of pre-Vichy France, or a high-stakes poker game involving an office-seeking Montgomery Forster and the Mississippi Delta slavocracy donor class that absolutely must be read to be believed.

But again, it’s the sometimes seamless, and at other times seams-showing melding of history and fiction-imitating-history that makes American Pop a singularly original work. It’s not always entirely clear when Wright is weaving references to real or imaginary historians into the book, but that’s half the fun.

In an opening sequence that finds a semi-suicidal Montgomery Forster looking down from a Peabody Hotel ledge on New Year’s Eve 1939, Wright sets the scene inside the hotel with a quote. “In his book God Shakes Creation, David Lewis Cohn writes, ‘The Mississippi Delta begins in the lobby of the Peabody Hotel and ends on Catfish Row in Vicksburg. The Peabody is the Paris Ritz, the Cairo Shepheard’s, the London Savoy of this section. If you stand near its fountain in the middle of the lobby, where ducks waddle and turtles drowse, ultimately you will see everybody who is anybody in the Delta.’ This evening was no exception.”

As Wright launches immediately into vivid descriptions of the “everybody who’s anybody” in attendance that New Year’s Eve, he delivers an irresistible invitation to a novel and a world that’s simultaneously imagined and real.

American Pop is not entirely without its loose ends. Midway through the novel, Wright introduces Robert Vaughn, a young graduate student who abandons the dissertation he’s supposed to be writing and launches headlong into fervent, if unfocused research into the history of Panola Cola and the roiling family conflicts inseparable from its ascent and demise. An article he finds in Beverage Digest captures his obsession: “Why read fiction? Why go to movies? [The] soft drink industry has enough roller-coaster plot-dips to make novelists drool.”

Wright isn’t overselling his yarn here because he’s already made clear that the drool-inducing version of the soft drink story is the project of someone else’s book, not his. But which version, if any, will Robert Vaughn tell? While his connection to the Forsters is clear, where he fits into American Pop’s meta-narrative of faux-history is not.

Arguably, revealing Vaughn as this history’s hitherto-unidentified author would have proven too pat a resolution for a novel that eschews such predictable plot turns. But something about the presence of Vaughn and his open-ended research feels too unresolved, and oddly incongruous in a book that occasionally references its own (imagined) archival underpinnings.

That said, it’s hard to fault a book suffused with so many delightful and rewarding surprises for confounding expectations one more time.