America’s Religious Wars: The Embattled Heart of Our Public Life 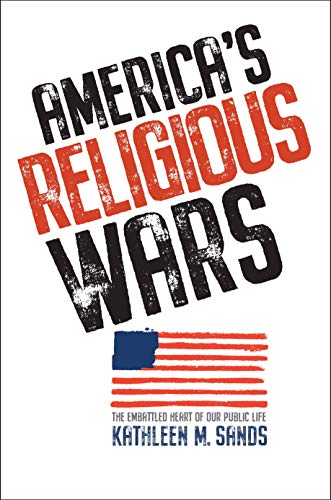 “Professor Sands musters abundant historical evidence to make her principal points, particularly in laying out the enduring tension between foundation and separation paradigms.”

Professor Kathleen M. Sands, trained in theology, critical religious studies, and American history, articulates America’s religious wars through the constitutional paradigms of foundation and separation. The foundation paradigm asserts that religion is the foundation of American life and morality. The separation paradigm avers that the state must be separated from its entanglement with religion.

Thus, the First Amendment nurtures a paradox by allowing “the free exercise” of religion and simultaneously prohibiting “an establishment of religion.”

A core theme of the book explains in rich detail how the religion clauses ripening over more than two centuries arm sociolegal factions to defend conflicting positions on race, gender, sexual orientation, and science. The foundation folks imagine a white, European (previously Anglo-Saxon), Protestant, heterosexual America whereas the separation folks argue for the rights of religious, racial, and sexual minorities living in a diverse America.

Professor Sands offers a superb analysis of the foundation and separation paradigms that inform the American discourse over profound social and moral conflicts. However, she boldly asserts that the religion clauses “carry a fatal flaw” and that the founders engaged in “double-talk.”

Unfortunately, Professor Sands confuses the notion of paradox with the notion of contradiction. A contradiction carries irreconcilable elements and its resolution requires a choice of one or the other. A paradox holds in balance the strands of a complex reality that cannot be linearized.

The religion clauses, for good reasons, do not opt solely for free exercise or non-establishment. Religion, much like a knife in the kitchen, is both valuable and dangerous. A knife cannot be dismissed from the kitchen but must be handled with care. Such was the paradoxical view of religion that the founders relied on. Such a paradoxical view is needed to facilitate the freedom and diversity of religion free of state persecution.

Chapter Three examines how the notion of religion has been and continues to be contested to exclude certain religious groups. For a long time, the understanding of (true) religion was confined to what Professor Sands calls “Euro-Protestantism.” The prejudice against “foreign religions” was aimed at narrowing the scope of American identity. Prejudice continues to fracture the notion of religion as political, social, and evangelical forces confront new faith groups entering America, particularly the Muslims.

The 19th century Euro-Protestant sociolegal battles against the Catholics and the Mormons expose how religion fights religion. In addition to expressing “religious tensions . . . in salacious bestselling novels, vitriolic pamphlets, and vicious cartoons,” the Protestants viewed Roman Catholics and Latter-day Saints as existential threats to the American way of life, culture, and morality, and “denied them certain basic rights of citizenship.”

Alleging sexual deviance, the popular narratives slated the Catholic Church, denigrated the Pope, and “likened covenants to brothels and harems.” The Mormons practiced polygamy that defied the Euro-Protestant theology of monogamy. The United States Supreme Court, itself a Euro-Protestant citadel in the 19th century, outlawed polygamy as an abominable practice of “the life of Asiatic and of African People.”

Sadly, racism runs through the veins of American sociolegal discourse. Professor Sands books sundry stories to show how racism frames religious wars as well. The Euro-Protestants racialized the Catholics and the Mormons as “non-whites” with “immoral” behaviors, much like “Hindus, Turks, and the Chinese.”

In recent years, Muslim Americans are being targeted as non-white foreigners who do not belong to the American way of life. Ironically, some prominent Catholics (e.g., Sean Hannity and Bill O’Reilly) have joined the Euro-Protestant establishment to peddle Islamophobia in America.

Sexuality has remained a primary religious conflict in American culture. More recently, sexual orientation, gay rights, and same-sex marriage have confronted religious heterosexuality that lies at the core of most belief systems, including Protestantism, Catholicism, and Mormonism. The foundation paradigm now attracts religious groups that faced prejudice and persecution in the prior centuries and decades.

Chapter Six examines seminal sexuality cases, such as Bowers v. Hardwick and Obergefell v. Hodges, to lay out the continuing conflict between foundation and separation paradigms. Having lost the power to dictate their values to sexual minorities, says Sands, the foundation folks see the same-sex marriage as a revolt against their religious liberty and wish to reassert “majoritarian religious norms as the law of the land.” The separation folks also invoke religious liberty but plead “science” to argue that sexual orientation, much like race, is an immutable biological trait that needs constitutional protection.

America’s Religious Wars catalogs the struggle between science and religion bearing on the question of human origin. The creationists are the foundation folks that reassert the Biblical conception of creation through the prism of intelligent design. The separation folks, including secularists and atheists, rely on evolutionism to debunk the Judeo-Christian fables of Adam and Eve.

Professor Sands makes the most engaging, innovative, and perhaps a bit controversial argument that “Euro-Americans” oppose evolution because it crumbles their self-image of superiority in race, religion, and civilization. The Euro-Americans, says Sands, have buoyantly animalized African Americans and other races. The evolution animalizes all humans, including Euro-Americans.

The 1925 “monkey trial” may have weakened Christianity but it strengthened American racism as some biologists ranked races in terms of their degree of removal from the animal kingdom. The dark races were deemed closer to the animals whereas the whites were the most removed from animals and therefore “civilized.” Thus, Sands opines, whiteness as a form of superiority continued to assert itself as the foundation of America.

Throughout her book, Professor Sands comes across as a resolute critic of Christianity and a passionate critic of white males. She is willing to accommodate African Americans who opposed evolutionism. She cites extensively from a Canadian case to demonstrate that the Jews defend same-sex marriage. She empathizes with Muslims as the new Mormons subject to hostility. But she seems determined to tear apart the “Christian white male superiority.”

Professor Sands musters abundant historical evidence to make her principal points, particularly in laying out the enduring tension between foundation and separation paradigms. And yet here and there, in both tone and content, some readers may sense an unjustified scapegoating of, and an overcooked animus against, white males and Christians.