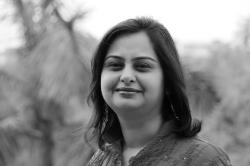 Divya Dubey is the publisher of India's Earthen Lamp Journal and is an editor and book reviewer whose reviews have appeared in The Asian Review of Books (Hong Kong), the Hindustan Times, and Livemint (India) and are forthcoming in other major national and international publications, including Wasafiri (UK), India Currents (US), and Biblio (India).

She has been a moderator and panellist at literary events such as the Delhi Literature Festival and Lit.Mus. Bangalore. She also runs Authorz Coracle, a resource for aspiring writers which includes creative writing workshops, online workshops, and mentoring programs besides editorial services. Her short stories and articles have appeared in several publications including Out of Print Magazine, Reading Hour, Muse India, The Literary Yard, Kindle Magazine, The Hindu Literary Review, Scroll, The Bookseller (UK).

She Will Build Him a City