Both Elizabeth Moore and Alice Couvillon graduated from Newcomb College. Ms. Couvillon later earned a master of arts in teaching from Tulane University and has been a teacher at Mandeville High School for more than two decades. They are also the coauthors of Pelican’s Mimi’s First Mardi Gras, Mimi and Jean-Paul’s Cajun Mardi Gras, Louisiana Indian Tales, Evangeline for Children, and Ancient Mounds of Watson Brake: Oldest Earthworks in North America. Ms. Moore and Ms. Couvillon reside in Covington, Louisiana.

Luz-Maria Lopez received her B.A. from Southeastern Louisiana University, where she was selected as the Outstanding Graduate by the visual arts department. She was commissioned by the university to create artwork depicting the native peoples of the Americas. Her work has appeared in galleries and museums across the country. Ms. Lopez also lives in Covington, Louisiana. 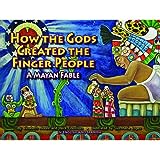 How the Gods Created the Finger People (Spanish and English Edition)

How the Gods Created the Finger People is a delightful tale about the creation of humankind.