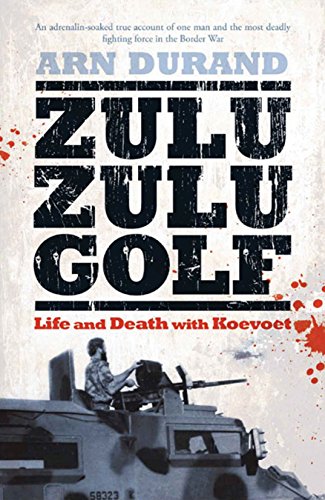 “‘What does matter is that a lot of people died because I killed them, and I lived. That is what I set out to do and that is what I accomplished . . . to all those people I’ve killed, I am sorry you died, but f**k you all and damn the rest.’”

A dog-eared love letter, a sentimental card, loved ones smiling out of old photographs—all wrapped up with ribbon and tucked away—these are the kinds of souvenirs most people treasure.

Arn Durand kept souvenirs and his were tucked away, too—in an old trunk in his garage. Only they weren’t tied up with a bow.

Along with the personal effects of vanquished enemies, weapons, and ammunition were photographs of “countless dead bodies hanging over the spare wheels and bumpers of Casspirs [armored military vehicles] like trophies on display. Piles of dead bodies on the ground, shot and killed and shot again and again and driven over. Broken bones, blood and brains. Gruesome scenes.”

Not the kind of mementoes you’d want your seven-year-old daughter to find. But Durand’s little girl did.

“Daddy, why do soldiers fight and do bad things to each other,” she asked him.
He couldn’t speak, Mr. Durand recalls. He just turned and walked away, tears streaming down his face.

“Now that my daughter is 25 years old,” he writes in the first chapter of Zulu Zulu Golf, “I can look into her beautiful eyes and tell her why I did what I did.” Mr. Durand wasn’t a conventional soldier. He was a member of Koevoet, a secret 1,000-strong force sent from South Africa in the 1980s to fight a border war against the “terrorists” of the South West African People’s Organisation (SWAPO).

The first confirmation many South Africans had of the deadly force’s existence was during the post-apartheid Truth and Reconciliation Commission set up by President Nelson Mandela to probe apartheid-era abuses and try to reconcile members of the newly formed “rainbow nation.”

What they heard wasn’t pretty. Koevoet—the name is Afrikaans for “crowbar”—had earned their whispered reputation for brutality.

As one former Koevoet member admitted to the commission: “We would just kill. That’s how we got our kicks. We were adrenalin junkies.”

This is not the type of book I usually read but I chose to review it because I wanted to know more about one of the darkest periods of Southern Africa’s torrid past. As a South Africa-based Brit, I’d gleaned bits of information about the apartheid era’s so-called border wars but never knew what really happened in neighbouring Namibia, formerly South West Africa, which shares a border with Angola.

I knew, of course, that SWAPO was dedicated to gaining independence from South Africa, and the propaganda-laden news of the time claimed the organisation’s military wing, PLAN [the People’s Liberation Army of Namibia], was using terror tactics to achieve it.

Maybe Arn Durand, who served in the deadly South African force for six years, would tell me the truth through his story.

It’s a tough read—nothing to do with Mr. Durand’s writing style, which is surprisingly light and easy. The details, though, were often graphic enough to keep me awake and forced me to take long breaks from the book.

The testosterone-charged Koevoet fighters were there simply for the thrill of the kill, it seems. No higher purpose, no God and country spurring them on. Excitement—and cash bonuses for the corpses of dead “terrorists”—was their goal.  Mr. Durand admits there was no legitimate reason for him to be there. “. . . I wasn’t a soldier, I didn’t have to fight . . . I fought because I chose to,” he writes. “I don’t even know if it was a war . . .”

I hope his grown-up daughter now understands what made her daddy do it.

I’m still not sure because, despite his tearful remorse when his child found the grim relics of his past, none of it really matters, says author Durand.

“What does matter is that a lot of people died because I killed them, and I lived. That is what I set out to do and that is what I accomplished . . . to all those people I’ve killed, I am sorry you died, but f**k you all and damn the rest.”