The Zeroes: My Misadventures in the Decade Wall Street Went Insane 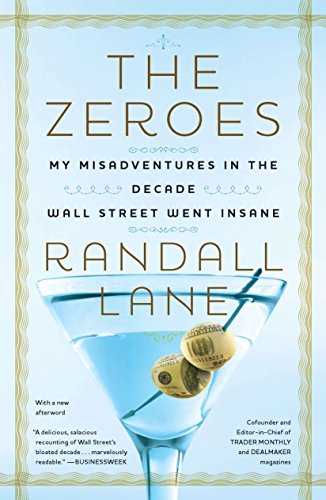 Cockroaches will endure after the final mushroom cloud disappears; similarly, the financial industrial complex—the economists, traders, bankers, regulators, and journalists—will continue to try to salvage bylines, royalties, reputations, and careers from the wreckage of our nest eggs.

Who better to enter this scene than Randall Lane, the self-proclaimed “scorekeeper” of Wall Street during the last decade, founder of the now-defunct Trader Monthly and Dealmaker, magazines that lionized the money changers. But Mr. Lane is too modest. Celebrating the seven deadly sins in periodical form, he served as Mephistopheles to the masters of the universe, whose motto was “See It, Make It, Spend It.”

Only Beezlebub would dedicate his book to “Mom, for the unconditional love and trust . . . ” and then begin with a recollection of a Wall Street boxing cavalcade he created where liquor, money, and blood flowed like something out of a DeMille silent movie. Ah, the devil uses any veil to mask his true intent. . . .

Nothing is beyond Lane when it comes to context. He uses 9/11 as a launching point to win the reader’s . . . sympathy? . . . understanding? . . . of how he was driven to join the men of Mammon. He used his journalistic credentials more as cover than method to begin a symbiotic relationship with the boys (always boys) who had computers rather than Glocks to take their money.

Lane’s role-model was MacFuture’s 24-year-old Andy Priston, who watched the attack on the Twin Towers unfold on the televisions of his London employer’s trading floor. Seeing not tragedy but opportunity, Priston bought and sold oil and stock futures, and every government bond he could. Less than an hour later, more than 3,000 dead, he made himself $1.5 million.

Priston became a legend in the trading world.

He was given the nickname “Braveheart” and featured as the first cover-boy for Lane’s new Trader Monthly.

Lane is canny: he’s willing to open his kimono and offer the reader any and all outrages of which he was a happy minstrel. Want to know the latest dirt on Jim Cramer, Al Gore, or John McCain? It’s in there.

But like a literary broken-field runner, he zigs, then zags. How? Confessions, of course. In our current national morality play, there are second, third and fourth acts as long as you look contrite. Lane informs us he fell prey to the “mind warp,” that he had no inkling what would happen “when the figures were tallied at the end of 2009,” and that he should have seen it coming.

Did I mention he has an excerpt of the book in the July 2010 Vanity Fair? Next, his rehabilitation tour.