Zero to One: Notes on Startups, or How to Build the Future 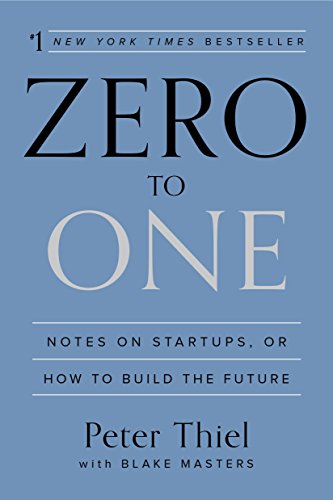 There’s a reason why Peter Thiel and his merry band of “PayPal Mafia” members have created seven companies worth a billion dollars each, including PayPal, SpaceX, YouTube, and a few others you may never have heard of. Ever wonder what makes a guy like that so smart?

You can find out in Zero to One: Notes on Startups, or How to Build the Future. Thiel’s compelling and often laugh-out-loud funny guide to creating startups helps readers understand how the world really works.

The book is extraordinarily irreverent, brilliantly observed, and a delight to read. After just a chapter or two, you’ll know whether you have what it takes to join the billion-dollar boy’s club.

“Zero to One” refers to companies Thiel describes as creating something that has never existed before. PayPal offered, for the first time, a payment system that did not involve cash, credit cards, or checks. That’s 0 to 1. That’s the kind of idea that a billion-dollar business needs.

By contrast, “1 to n” refers to creating a new business in a space where there are already plenty of other businesses. Thiel disdains such enterprises and suggests that they are highly unlikely to attain billion-dollar status. “1 to n” companies face competitors, and in Thiel’s worldview, competition is bad. The more you have to compete, the more you have to lower your prices. The more competitors you have, the lower your margins will be. No fun at all.

Zero to One companies, by contrast, are tons of fun. Thiel identifies four characteristics of successful zero-to-one companies. They enjoy a huge technological advantage, like Google’s proprietary search algorithms.

They enjoy the benefits of network effects, which means that the more people adopt the product or service, the more additional people will want to adopt it. And once they’re all on board, it’s very hard to get them all to move somewhere else. Think Twitter.

They benefit from economies of scale: the bigger the business gets, the easier it is to spread costs over larger and larger numbers of sales.

And they have a great brand, but the brand only matters because the products are great.  Apple and Yahoo! have terrific brands, yet Apple’s products are outstanding and Yahoo!’s are . . . well . . . as yet undefined.

When you come up with an idea for a company with all four of these features, you have the opportunity to run the table and enjoy monopoly rents, which is what economists call it when you make all the money and nobody else makes any.

Thiel has intense disdain for our educational system, which he believes causes young people to become wandering generalities, instead of helping them discover which specific skill is their talent. This causes young people to buy into a system in which they want to keep their options open for as long as possible, which typically means they go into finance careers. Thiel doesn’t have much respect for people who go into finance because they don’t create anything—they merely redivide a pie that’s already been cooked.

Basically, Thiel has low regard for anything that the world as a whole is doing. Cleantech is a great example of a potentially billion-dollar industry that no one has mastered because everyone is doing basically the same thing—trying to come up with a technology that copies everyone else instead of being actually truly innovative. As a result, you have companies like Solyndra, which is only the best known among the scores of Cleantech companies that died aborning.

Thiel doesn’t have much use for would-be entrepreneurs who salivate at the idea of “one one-tenth of 1 percent of a billion-dollar market.” His point is that if you have to compete to get even a small piece of a market, you’ll never even get that small piece. Dreams—lucrative dreams—will die hard in his worldview.

If anyone else had made all these assertions, one might not take them overly seriously. It’s hard to argue, however, with seven businesses, each worth more than a billion dollars. In fact, it’s hard to argue with Peter Thiel at all. So read his book, and learn from the master. If it doesn’t change the way you think, either you’re already on your way to building a billion-dollar company and you know all this stuff, or you are doomed to a life of competition, and that’s no fun at all.