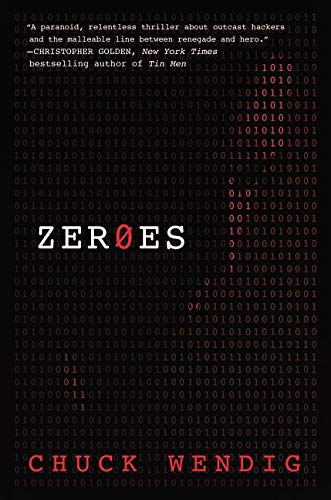 Zer0es is a fast paced cyber-thriller that starts off strong, keeps the reader interested throughout, and finishes well, leaving room for more in a possible series. It is gripping, informative, hilarious, terrifying, brutal, and at times slightly claustrophobic. All good qualities for a thriller.

However, if the reader is a Chuck Wendig fan then Zer0es may seem to be missing something. It lacks a certain grit and spit that Wendig’s previous novels have had. Yes, there are fast-talking, snarktastic characters that use their words like weapons, but none of the characters have the punch that Wendig’s previous protagonists like Miriam Black or Mookie Pearl possessed. In a way, Zer0es feels like Wendig-light.

Because it is by Chuck Wendig, that doesn’t mean the novel is light on great writing or not a solid entry into the genre of technological thriller. The prose is tight, the dialogue is snappy, the action is gripping, and the suspense keeps the reader wanting to turn the next page. Wendig doesn’t pull punches on the violence, making sure the reader feels each punch, each kick, and each shock from a taser or impact from a bullet.

Centered around an ensemble of misfit characters—the Internet troll, the burned out conspiracy theorist, the money hungry tech outlaw, the idealist freedom fighter, and the wannabe hacker—Zer0es delves into social and political themes of governmental surveillance, the role of online justice in the everyday world, the idea of individual rights versus national security, and the way we as a people have come to depend on technology in every single aspect of our lives.

As stated previously, Zer0es can get claustrophobic when the reader imagines just how little is left in life that is not touched by tech or by the ever-looming presence of the government. No matter where a person goes, there a person is . . . and is being watched. Yet despite the almost suffocating reality of surveillance, Zer0es does manage to keep it light and gives more than a couple of nods to that ’90s cult film Hackers. Wendig’s skill with witty dialogue helps to break the tension just before the story becomes too heavy for itself.

Although Wendig’s previous novels have had feet firmly planted in genres such as urban fantasy and YA dystopia, this addition to his bibliography is a solid effort in the technological thriller genre and will leave readers wanting more. His skill as a writer is apparent on every page and if he can merely recreate what he has accomplished in Zer0es then he will easily be adding thriller lovers to his already growing readership.