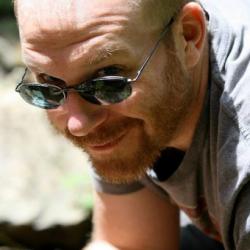 Bram Stoker Award nominated-novelist, short story writer, independent screenwriter, podcaster, and inventor of the Drabble Novel, Jake Bible is able to switch between or mash up genres with ease to create new and exciting storyscapes that have captivated and built an audience of thousands.

He is the author of the bestselling Z-Burbia series, the Apex Trilogy (Dead Mech, The Americans, Metal, and Ash) and the Mega series for Severed Press, as well as the YA zombie novel Little Dead Man and the teen horror novel Intentional Haunting, plus  the forthcoming ScareScapes series and Reign of Four series for Permuted Press.

Mr. Bible lives in the wonderfully weird Asheville, NC, with his wife and two children.

Z-Burbia 3: Estate Of The Dead

The Prey of Gods

“Drayden has knocked it out of the park with this novel. . . . an excellent piece of fiction that is levels above any of the summer reads coming out.”

"The thing forces its way out of the president-elect's body, through his unbuttoned shirt, and unfurls down his body.

New World: An Anthology of Sci-Fi and Fantasy

New World: An Anthology of Sci-Fi and Fantasy is a refreshing grouping of 24 science fiction and fantasy stories by some of the best indie and established comic book creators in the busine

"I belong to what they call the Miraculous Generation: those born in the years between the start of the Second American Civil War in 2074 and its end in 2095."

"Although reeling from a crippling Imperial attack, the New Republic has managed to drive the remnants of the Empire into hiding.

"I'd failed her. I'd promised to keep her safe and I'd failed her. Now, I could do nothing but stare down at her grave again and murmur a prayer in which I only half-believed."

“House of Penance is a masterpiece . . . Brilliantly written and beautifully illustrated.”

“The art is top notch, and the writing is excellent.”

"You're not safe out on your own right now," Bronko tells her. "None of us are."

Michael Tolkin is a great writer, and his grasp of satire is excellent. He is known for The Player and his scathing send ups of Hollywood culture.

The Fortress at the End of Time

Joe M. McDermott's The Fortress at the End of Time is inventive, thought-provoking, insightful, ambitious, and tedious.

The Return of the Zombies!

In a day and age when the #1 selling comic books series is The Walking Dead, it's hard to imagine there was a time when even mentioning the word "zombie" in a comic book was strictly forbi

Voodoo Vengeance and Other Stories (The EC Comics Library)

Once upon a time it wasn't superhero comic books that ruled the newsstands.

Good guys? Bad guys? Morality? Ethics? Who's to say where any of this plays in to The Troop. This is not the usual superhero fare.

“Faller is exciting, refreshing, original as it can be, and action packed . . . It cannot be recommended enough.”

The Complete Raise the Dead

Let's face it, back in October 2003 The Walking Dead lit a fire under every writer that was a zombie fan.

“this novella is brilliant. Beautiful prose filled with imagery that fills the imagination with dread and worry.”

Zombies on Film: The Definitive Story of Undead Cinema

This is a coffee table book. It's that simple. An oversized hardcover that sports a garish and sickly yellow-green dust jacket with a landscape scene of the undead walking through a field.

“Science fiction, noir, and dystopia wrapped into a highly entertaining, and well-crafted novel that is hard to put down.”

The Everything Box: A Novel

“sure to entertain and dazzle all who take in its exceptionally crafted words.”

Good news and bad news. Such is life.

“For fans and readers of magical urban fantasy, this novella is perfect.”

The story of a genetically engineered assassin, Showman Killer: Heartless Hero takes place in a far-off galaxy sometime in the distant future.

Beginning with the slipcover presentation that reveals a second cover underneath, to the story and illustrations themselves, Junction True presents itself as different from the start.

For the fans of the Aliens movies, The Complete Aliens Omnibus: Volume 1 by Steve Perry and Stephani Perry is a must have for those who love great scifi, especially in the space marines ge

Fables: The Wolf Among Us Vol. 1

Fables: The Wolf Among Us Volume One is based on the bestselling video game by Telltale Games which was in turn based on the comic book series Fables.

“Tight and intense, vivid and dark, Suiciders is entertaining and exciting.”

The Bazaar of Bad Dreams: Stories

Our Lady of the Ice

“a classic noir mystery that is wrapped inside an alt-history golden age science fiction setting.”

Crime Does Not Pay Archives Volume 10

Crime Does Not Pay was a periodical comic book series that was published from 1942 to 1955 by Lev Grossman Publications.

There have been many retellings of the Jack the Ripper legend. From novels to nonfiction books, TV shows to movies, and even more than a few graphic novels.

Compiling the first five issues of the Orphan Black comic book series, Orphan Black: Volume 1 is in essence a rehashing of the events in the first season of the TV show the comic

Rat God is the perfect graphic novel for those who enjoy Lovecraftian horror but want something original and exciting.

“Never has wading through the bizarre been so rewarding.”

Where to start with Klaxon?

Made to Kill (L.A. Trilogy)

Welcome to Night Vale: A Novel

Futuristic Violence and Fancy Suits is not for everyone.

“The Tithe: Volume 1 is a welcome entry into not just the graphic novel market, but also the overall crime fiction genre.”

“fun, humor, horror, and a fantastical cast of characters.”

Zer0es is a fast paced cyber-thriller that starts off strong, keeps the reader interested throughout, and finishes well, leaving room for more in a possible series.

Richard Kadrey’s seventh novel in his urban fantasy Sandman Slim series puts his protagonist, James Stark, right into the thick of a yet another possible end of the world event: the attempted murde

“just like the monsters that haunt the pages, zombie storytelling never dies.”

“Wormwood is an intergalactic, inter-dimensional, immortal, happy-go-lucky larval worm-thing with a liking for fine stout, strippers, and most of the other vices planet Earth has on offer.

“a satisfying read for the diehard fans out there that are well versed in the worlds of zombies and the end of the world as we know it.”