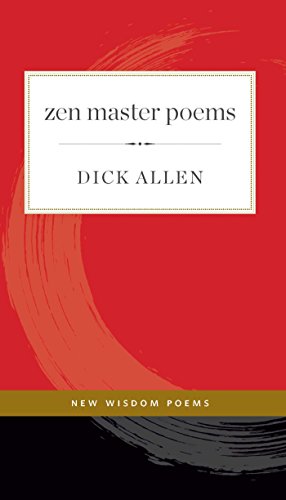 Dick Allen, former poet laureate of Connecticut and the author of eight books of poetry in a wide range of forms, gives us a quietly stunning collection of poems here in a tradition of American Zen. His voice, in part persona as Zen master, is very much the true self of the poet Allen; his approach is both challenging and assuring.

His brief preface connects this art of writing in another’s voice with John Keats’ “negative capability” view whereby “a man is capable of being in uncertainties, mysteries, doubts, without any irritable reaching after fact and reason.” This allows both empathy and spiritual. And so he follows the Zen approach of knowing the limits of knowledge and the necessity of dealing directly with all things.

Dick Allen is one with the legendary Crazy Zen masters (Hakuin, Han-Shan, Ikkyu, Basho, Ryokan) radical masters who speak in koan puzzles in order to share what is in and beyond words. His goal, that of all Buddhism, is to help us awaken and so ask with him, “how does one live calmly and with perspective in an America of media blitz and cell phone insistence? How does one lean back in a computer chair and hear temple bells ring in South Dakota?” In the poem “Not Why, but What” he opens the door to Zen.

Not why, but what,
that’s the secret
of Zen.
Not because,
but is:
the famous cherry blossom
blossoming.

The meaning here is not encoded nor based on a symbolism. A Zen poem simply means what it is. And here he leans toward a Taoist directness in pointing the way. Dismissing judgment and cause and effect, all wisdom lies in being alive to the momentary image, “the famous cherry blossom/ blossoming.”

He declares his hope for his own poems: “May a Zen Master poem here or there cause you to pause or smile or sit beside a evening lake or walk a small meandering ways down a quiet road.”

His own poetry is both spare and clear, a gift of his reading and writing for five decades in various forms. It has that ring of the ancient Zen poets who often used the letter poem to deal with relationships, as in “What a Long Conversation”

What a long conversation
we never had!
All those rivers
we never crossed together.
You so busy with your own life,
I so busy with mine.

The ease and craft with which Allen deals with friendship here speaks for itself. His poems are ones you want to mark and come back to for their quiet form and comfort. At 77, Allen is closing in on life essentials in his verse in which, “One day you’re heading west to a sixties band singing ‘Mother Earth.’/ The next day you’re out of it forever,/ floating among the stars, not one of which you can name.” We stand inside the circle of life and death.

Again, like a Zen master whose lessons are to be absorbed in silence, the poet simply uses language to point to everyday meaning. He would also caution us not to confuse the pointing finger for beauty of the thing itself, the cherry blossom blossoming. His “Listening Deeply” says it all:

Listening deeply,
sometimes—in another—you can hear
the sound of a hermit, sighing
as he climbs a mountain trail to reach
a waterfall
or a Buddhist nun reciting prayers
while moonlight falls through the window
onto an old clay floor,
and once in a while, a child
rolling a hoop through the alleyways of
Tokyo, laughing,
or a farmer pausing in a rice field to watch
geese fly,
the thoughts on his lips he doesn’t think
to say.

For such lovely and lively writing, we thank the poet for his years of Buddhist practice made manifest in a poetry both wise and comforting.