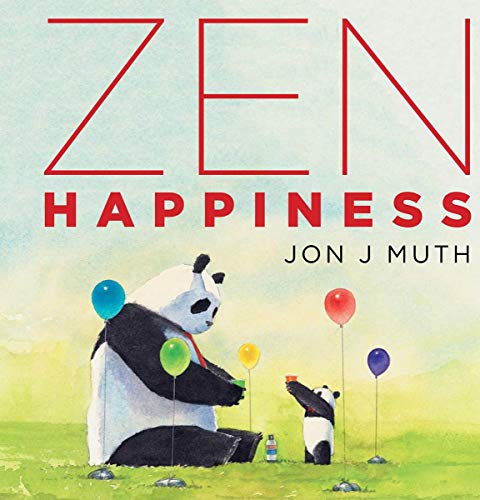 Already generating a ton of pre-press buzz, and rightfully so, Zen Happiness is a book to get excited about!

Jon Muth created quite a stir back in 2005 with the release of Zen Shorts, his charming, captivating, and stunningly illustrated story about a contemplative panda named Stillwater and the three delightful siblings—Karl, Addy, and Michael —who befriend him. The children share powerful life perspectives with Stillwater yet remain innocent and playful.

Zen Shorts was followed by Zen Ties in 2008 and told a fresh story about Stillwater, Karl, Addy, and Michael making friends in unexpected places. If Muth’s previous books are not readily familiar to the reader, they are highly recommended, even must haves. It would be good to read at least one prior to Zen Happiness, if at all possible, so as to enhance the understanding and become aquatinted with the characters.

Zen Happiness is a darling book all on its own, but there is no mention of the characters, neither their names, nor how they relate to each other. Since there is no story line to Zen Happiness, this knowledge adds a level of depth that would otherwise be sorely lacking.

In this project, Muth has chosen common sayings from Zen Buddhism meditation traditions and matched them with illustrations from each of his books. These 12 insights serve to inspire wisdom and peacefulness; they generate a sense of compassion toward ourselves and each other, and heighten an appreciation for the world around us.

“Be someone you want to be around,” is paired up with an image of Stillwater holding out a huge red market umbrella to shelter Karl, Michael, and Addy—an illustration taken from Zen Shorts.

“What we do now is what matters most,” is set alongside Karl, Michael, and Addy taking a meal to an elderly neighbor—borrowed from Zen Ties. “When you reach the top, keep climbing,” is matched up with the children climbing up Stillwater and joyfully dancing around on top of him—also extracted from Zen Ties. Beautiful, yes. But so much more meaningful to know the story behind the artwork.

This tender book is certainly appropriate to a much wider audience than the targeted four to eight age range and would make an excellent gift in almost any situation. It instantly endeared itself to a household of teenagers, who all gravitated to it, stopped for a moment to read the 12 sayings, and proclaimed an emphatic and unanimous, “I love this book!” A friend who popped over for a quick minute, saw it sitting out and impulsively picked it up only to exclaim a few moments later, “I have to buy this book. No, I have to buy 12 copies of this book!” What better endorsements could there be?