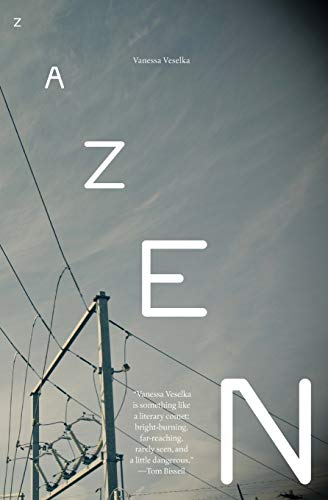 “. . . not a conventional, well-crafted tale but a streaking flash of barbed satire and 21st century malaise. . . . Zazen is a powerful novel because it points out the sheer amount of uncertainty and distraction surrounding any person in the modern world.”

If Bob Dylan had been a female novelist born in 1969, he might have written Zazen. And it is so great when a woman does something better than any man could have done—no matter how cool he is. Vanessa Veselka’s gritty frenetic writing serves up an exciting new flavor among today’s literary menu of MFA influenced prose; not a conventional, well-crafted tale but a streaking flash of barbed satire and 21st century malaise.

Della, raised by hippies, waitressing in a vegan café, lugging a backpack filled with her Ph.D. in paleontology, her shattered psyche, and her maps of destruction, begins calling in pseudo bomb threats from prepaid cell phones. She also contemplates leaving the country and actually books two flights. Her alienation from the society around her calls for a group and a cause she can believe in, but despite an array of similarly distraught friends, she cannot find what she is looking for.

The Buddhist posture “zazen” involves sitting immovable so as to achieve a holistic body-mind framework. Della is obsessed with incidents of self-immolation. She collects newspaper photos and posts them on the walls of her attic room. She learns from her yoga instructor that being able to sit still is the key to burning successfully. The trouble is, nothing in Della’s consciousness stays still for much more than a second. Her internalized state of the world’s capitalism insanity run amok, continuous war, school bombings, and WalMart manifests as nonstop attention disorder.

Zazen is a powerful novel because it points out the sheer amount of uncertainty and distraction surrounding any person in the modern world. Most of us find ways to shut it out, but Della is open to and affected by every bit of it.

The burning question in Zazen is whether revolution could be the answer. Echoing Paul Bowles’ anguish and Tom Robbins’ comedic flair, Ms. Veselka’s answer is unconvincing, but the irony is unmistakable: How did the country that was founded on revolution end up watching 999 cable channels and shopping at WalMart?