Zahhak: The Legend of the Serpent King (A Pop-Up Book) 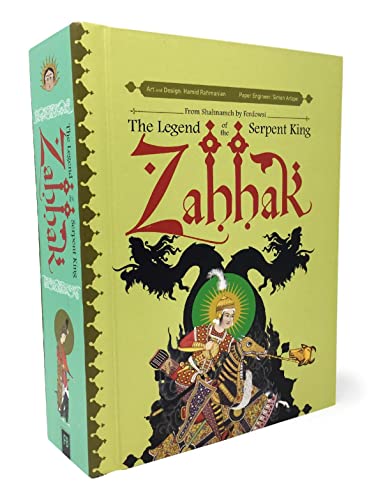 Zahhak: The Legend of the Serpent King straddles the line between book and art object. An ancient text is resurrected here in a new and surprising form, part of a large-scale project to bring Persian literature to the modern, English-speaking world. The text is drawn from the Persian epic Shanameh composed by Ferdowsi around the turn of the first millennium.

In 2013, illustrator Hamid Rahmanian published an illustrated version of the entire poem. That massive, spectacular work (nearly 600 pages in length) embodies the poem’s literary and historical importance to Persian identity. Zahhak lifts just ten pages from that volume, and animates them in new and startling ways.

The story itself is brief and fairly simple. Zahhak, the selfish son of a good king, is tempted by the devil to murder his father and take the throne. At his coronation feast, the devil appears again, kissing Zahhak’s shoulders so that a serpent erupts from each. Zahhak is informed that he can calm these serpents only by feeding them young men. This ongoing sacrifice drives him to ever-increasing wickedness. He begins a massive campaign to conquer many lands, including Persia, which he rules tyrannically for a thousand years.

A noble-hearted young leader arises to lead a rebel army against the Serpent King. He defeats Zahhak but, at the request of the angel Sourush, does not kill him. The Serpent King is imprisoned, and the young leader, Feraydun, becomes a good and just ruler.

Hamid Rahmanian is a filmmaker as much as an illustrator, and his work is beautifully suited to this new form. The pop-up format allows some of film’s kinetic energy to reach the page. Each image becomes shockingly three-dimensional, reaching out farther than initially seems possible. More than simply “popping up,” the pages unfurl, revealing complex folds and unexpected possibilities. Each scene is layered and dynamic, showing the movements of armies and the struggles of individuals. Even the pages have sub-pages, small fold-outs with further text and illustrations that lurk beside more central images.

This is not static, Western imagery. Rahmanian draws on Persia’s millennia-old artistic traditions. The animals and flowers of carpets dance borders around the secondary pages. Abstract flourishes underline the text. And the human figures pose and move within the long traditional of Persian miniatures. The book is, first and foremost, a work of art. The text is secondary, captions of an art installation.

Paper engineer Simon Arizpe has produced magnificent creations that extend the boundaries of what a pop-up book can be expected to contain. He has shaped Rahmanian’s images into objects, sharp to the touch and vividly fragile. The result draws attention to the book as object. In a culture of mass-produced reading, Zahhak demands care, attention, and protection.

The book arrives wrapped in bubble wrap and emerges like a sculpture. Its pages cannot be flipped. Their complexity ensures that they can only “pop” slowly, guided by the reader’s cautious movements. Some layers catch on others and need to be extricated, lest they tear. The sub-pages threaten to rip their paper anchors loose when incautious fingers tug them free.

This fragility is not necessarily a flaw. It simply makes reading Zahhak a conscious, deliberate act. The book demands respect. It isn’t a disposable object. It won’t tolerate neglect, and it won’t be used to prop up a table. It is not that kind of book. Instead, it is an art project bound in a cover. It should be admired and displayed. Rahmanian and Arizpe have created a detailed and delicate work whose frailty emphasizes its value.