Yuge!: 30 Years of Doonesbury on Trump 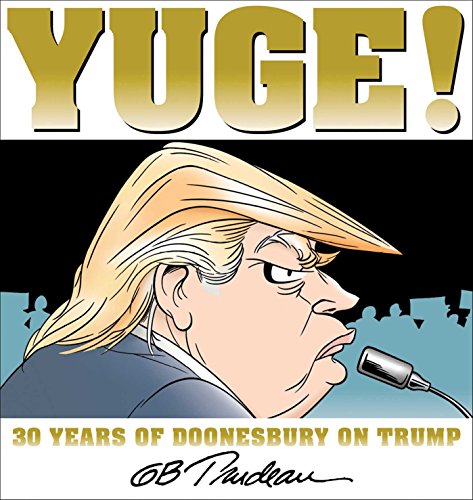 Yuge!, Garry Trudeau’s new compilation of strips from the juggernaut that is Doonesbury, is ideal for those who feel that they have not, over the past few months, gotten their fill of Donald Trump quite yet, and for the members of the four percent who insist that they still have not made up their minds when it comes to voting next November.

Indeed these 30 Years of Doonesbury on Trump might well help these hapless souls to at last select a candidate.

The remarkable thing about Doonesbury is that, like Seinfeld, it still holds up. Indeed, the whole thing is a hoot. The two share a certain East Coast sensibility, and their humorous cores preserve an almost total lack of sentimentality, which is perhaps the secret to their charm. They share a set of beloved characters as well, from Jerry and George and Elaine, to Duke and Honey and Zonker—all here, ageless and ink-faced.

“Hey, Kids! Tired of getting killed on insults I the cafeteria?

“Then start fighting back with my quality Trump insults!

“Choose from over 500 tremendous insults I’ve tweeted out since last June, including . . .”

What follows is a long list of real-life Trumpian insults (“Kooky.” “Third-rate.” “Goofball atheist.”) that fills the panels of the page and carries over onto the back inside cover.

What amazes is the Trudeau seems to have been onto Trump way back in the ’80s. And the book serves to remind us that he has been the same big ego-ed, thin skinned, tiny handed fellow apparently ever since.

As Trudeau writes in his preface, by way of backstory:

“In New York City, he [Trump] practically owned the ’80s, rocketing to the top as the Big Apple’s loudest and most visible asshole, knocking off big-league rivals like Ed Koch, Julian Schnabel, and Steve Rubell. To those of us in the ridicule industry, the man Spy dubbed ‘a short-fingered vulgarian’ was a gift beyond imagining, and we made him a permanent part of our business plans.

“The earliest strips (mocking Trump’s first presidential trial balloon) began in the fall of 1987. ‘People tell me I should be flattered,’ he told Newsweek. But as there was nothing remotely flattering about the portrayal, he soon became confused, then irritated—all the more as I as drawing him in a way that suggested I was unaware of how good-looking he was. By the end of the week, it was game on: Trump had someone new to wail on, and I had a new recurring character, one whose real-life counterpart could be counted on to react in real time.”

And reoccur he does. He first is paired with Duke, who captains the Trump Princess on its trip from New Jersey to the 1988 Republican Convention down in New Orleans, where Trump holds a press conference and is asked whether or not, as a billionaire even then, he would have any rapport with “voters of modest means.” He answers:

“Are you kidding? I’ve spent my whole life working with people of modest means.”

The reporter follows up:

And Trump’s punch line is as follows:

“Evicting them! I’ve seen how these people live!”

And the line drawings of the man are all hair, even in the ’80s, but it gets bigger and oranger as time moves on, until a perfect 2007 strip diagrams the triumph of origami that is his present-day upsweep.

Garry Trudeau is perfectly ruthless when it comes to Trump. He puts words like these, given to radio host Mark, to drive his point home:

“He may be hard to pin down, but one thing remains the same—a deep, pathological need for attention!

“As far back as 1987, he’s pretended to run for president, freshening his tacky brand with free media, but always wimping out before the first primary!

“So here he is, the man with the piggy eyes, contemptuous scowl, and hair like orange cotton candy! Welcome, sir!”

There was a time when we all hated Trump, although we did not yet fear him. Back when poor Ivana was humiliated on the Aspen ski slopes when “The Donald” brought his girlfriend Marla along for a fun vacation, and they happened to run into his wife. Or farther back still, when we all read that he was being sued for having established policies to make it very difficult indeed for persons of color to rent in any of his buildings.

And then there was a time when we all laughed along with Trump, when he was forcing the likes of Penn Teller and Marilu Henner to sell pizza for charity on Celebrity Apprentice, where the stakes were low and Joan Rivers revitalized her career by winning.

What Garry Trudeau does in his new collection Yuge! is allow us to laugh at Trump once again, which is a wonderful thing. A Yuge! thing. And a thing that we will very likely thank him for by making this collection the necessary stocking stuffer for 2016. Face it, win or lose, Trump will still be Trump. And who else could possibly be Time magazine’s Man of the Year? After all, he’s already the Republican Party’s—and Garry Trudeau’s.

The collection runs as a timeline, with sections for each decade, 1980s to present. Note that Zonker attends Trump University and hijinks ensue. And that the university motto is “Greed est bonum.”

And when asked by reporters if he is still seeing Marla Maples after his divorce with Ivana has begun, he answers:

“No. I’m not seeing anyone. It’s Bimbo Limbo until this thing cools off.”

And that, when Trump attempts to develop a television version of his real-life Trump board game, it consists only of big-breasted women encouraging the audience to say the word Trump as often as possible. And that, in a 1999 strip, when Trump is once again imagined to be running for president, he has focused his stump speech to the consist of:

And that one of the biggest laughs in the book is a simple line drawing of Trump wearing only a robe festooned with Ts.

And that Honey Huan, China’s #1 most-wanted “Hooligan,” nearly steals the whole show out from under Trump himself.

And, finally, early on, Trudeau gives his readers one of his best jokes, when Trump is having the bathrooms on the Trump Princess filled with murals of big-breasted women, the style of the paintings is a new and perfectly crafted thing:

And the reader, coming upon this, does not know whether to laugh or cry.

Only a wacko grubby dope would not buy this book. Only an unattractive, totally corrupt irrelevant, low energy, know-nothing spoiled brat would not want this book on his or her nightstand to dip into repeatedly every time the real guy gives a speech. And only a sad, overrated, really pathetic lightweight will not laugh himself to sleep after having once again read through this thing, which is the biggest and best book of 2016.

And it’s going to be Yuge!