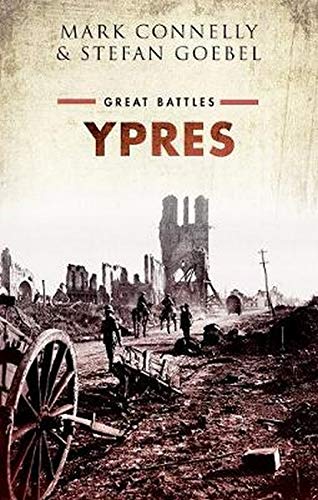 “[T]he obsession with Ypres by the warring states, especially the British, increased because so much blood was spilled there. Ypres became for the British, Connelly and Goebel explain, what Verdun was to the French: the site of the fiercest and most desperate fighting of the war.”

The American diplomat and historian George F. Kennan called the First World War the “seminal catastrophe” of the 20th century. As he looked back on the tumultuous events of the Second World War and the Cold War, Kennan expressed his belief that “all the lines of inquiry” led back to World War I.

The Belgian city of Ypres (now Leper) and its environs suffered the ravages of the First World War as a result of five major battles between October 1914 and September–October 1918. As Mark Connelly and Stefan Goebel of Kent University explain in their contribution to Oxford University Press’ Great Battle series, Ypres became an obsession for the warring states.

Situated on the northern end of the stalemated Western Front, Ypres was considered strategically significant as the gateway to the English Channel.

But the obsession with Ypres by the warring states, especially the British, increased because so much blood was spilled there. Ypres became for the British, Connelly and Goebel explain, what Verdun was to the French: the site of the fiercest and most desperate fighting of the war. “Ypres,” the authors write, “became the supreme testing ground of British imperial mettle.”

The cumulative casualties in, and the destruction of, the Ypres salient eclipsed even those at the Somme where the British suffered nearly 60,000 casualties (including 20,000 dead) on the first day of the battle.

The Third Battle of Ypres, known as Passchendaele, fought between July 31 and November 10, 1917, was especially destructive. “It was Passchendaele,” the authors write, “that saw Ypres take centre stage, the dominant panel in an awful triptych of battles, allowing it to dominate the British vision of the war over the next twenty years.”

The authors provide little more than a summary of the fighting in and around Ypres. The battles are not the main subject of their book. Instead, they focus on how those battles were and are commemorated by Britain and Germany, and to a lesser extent by Canada, Australia, and New Zealand.

Connelly and Goebel, in the words of one of the war’s great historians Hew Strachan in the book’s Foreword, discuss Ypres’ “legacy, its historical interpretation and reinterpretation, its place in national memory and commemoration, and its manifestations in art and culture.”

During the war, Ypres and its physical devastation were depicted in paintings, sketches, drawings, and photographs. Many of those images were collected in 1917 in The Western Front, and include depictions of the ruins of the Cloth Hall, of a solitary figure walking near the façade of St. Peter’s Church, and of an almost empty landscape dotted with ruins.

Landscape artist Paul Nash, who served as an officer at Ypres and returned to Ypres as a “war artist,” repeatedly portrayed in his work “the desecration of the physical environment” which, the authors note, “provided a metaphor for all the suffering and misery caused by the war.”

Perhaps the most famous image of Ypres is William Rider-Rider’s photograph of Canadian soldiers “occupying a series of shell holes in a lunar landscape” at Passchendaele. This was the ultimate “no man’s land,” devastated by artillery with dozens of craters filled with rainwater and mud.

The nations who fought at Ypres were determined that the sacrifices of their soldiers would not be forgotten. The authors divide the postwar efforts at remembrance and commemoration into the years 1919–1927, 1928–1944, 1944–2014, and 2015–present. Those efforts involved mostly monuments and cemeteries, but also battlefield tourism.

Historians and poets also began to debate the responsibility for starting the war and the wisdom, or lack thereof, of the military commanders who developed and implemented the tactics and strategies of war.

The British were the first and most active commemorators. Connelly and Goebel note that in early 1919 then-Secretary of State for War Winston Churchill, who served briefly as a soldier near Ypres during the war, wanted Britain to acquire “the ruins of Ypres as a permanent memorial to the sacrifices of the British Empire.” Three British bureaucracies had a role in the efforts to commemorate British sacrifices.

Britain’s most impressive monument was the Menin Gate, which was completed in 1927 and contains the names of 56,000 missing soldiers. This huge monument “acted as a funnel through which pilgrims would access the salient.” The Menin Gate led these pilgrims to more than one hundred war cemeteries, including the massive Tyne Cot Cemetery near Passchendaele.

Germany under the Weimar Republic, meanwhile, focused their commemorative efforts on a war graves cemetery at Langemarck, near the scene of the First Battle of Ypres. The plans for this cemetery were announced in 1928 and it was completed four years later. It was one of more than 70 German war cemeteries in Belgium.

The authors note that Langemarck and its legacy became the subject of a propaganda war between the left and right in Germany. When the Nazis took power, Langemarck became “a state-sponsored myth,” according to the authors. Hitler, like Churchill, had fought in the Ypres salient during the war, and he often invoked the sacrifices of the German soldiers at Langemarck in denouncing the Versailles Treaty.

After the Second World War, attention shifted to the battlefields of that war instead of its predecessor. But among historians, the debate about the way the First World War was fought continued unabated. The authors point to works by B. H. Liddell Hart, Leon Wolff, John Terraine, and A. J. P. Taylor as examples of the growing criticism of the war’s military and political leaders who repeatedly sacrificed their soldiers for, at most, meager gains on the battlefield.

War tourism, especially among the British, continued and increased as the decades wore on. Monuments and memorials continued to be built at Ypres (whose name had been changed to Ieper in 1951), including the “In Flanders Fields Museum.” Canada, France, Australia, and New Zealand participated in these commemorative efforts, though to a much lesser extent than Britain. The Ypres salient is, as the authors note, a “transnational site of experience and memory, a global and local place.”

Ypres and its legacy include both the best and worst of human nature—courage, bravery, heroism, and sacrifice mixed with fear, hatred, savagery, destruction, and death.