You've Changed: Fake Accents, Feminism, and Other Comedies from Myanmar 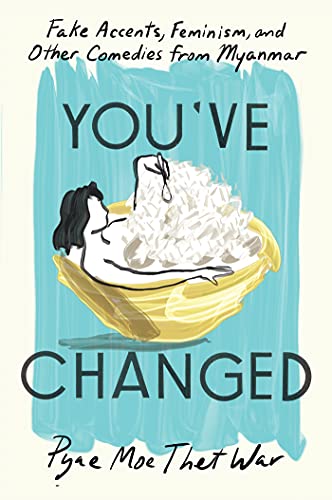 This is a very engaging, lucidly written, and entertaining collection of autobiographical essays produced by debutante Myanmar writer, Moe Thet War, writing as is stated, as Pyae Moe Thet War. The essays concern various aspects of her negotiation of multiple cultural and national identities, and the first essay “A Me by Any Other Name” discusses Myanmar naming practices, and the constant requirement to explain these to people from other cultures where she has lived for extended periods—notably the US and the UK.

Her “bureaucratic” name (birth certificate, passport, etc.) is Moe Thet War, but everyone calls her by the equivalent of her “nickname” Pyae Pyae, which few non-Myanmar seem able to pronounce correctly. Both these names were chosen with full consideration to religious, astrological, and semantic and other issues. Additionally, many of her peers (including her own sister Shan aka “Rose” in school) presumably those with most international exposure, choose for themselves a Western name.

This first essay goes into amusing detail on the difficulties Westerners, “white teachers,” and even her, now former, boyfriend Toothpick and his mom, experience in dealing with a name that does not have a Christian, a family, or a middle name, as well as the difficulties she has experienced in complying with the bureaucratic formats for example in completing SATs in high school.

Moe Thet War relates the internal conflict and self-hatred she felt because of not adopting a white name and cites, in passing, studies which show that the “whitened résumés” of Asian job applicants received more responses from prospective employers.

This first essay also includes toward the end a brief detour as to how Burma/Birmah/Bermah became the Union of Myanmar in July 1989, one consequence of which is that the now official language, Myanmar, does not have the “r” sound of the English language.

The essay was written during the author’s sophomore year of college in 2012, in “a small, very white American town” when “saying my name aloud to my new friends, professors and colleagues was an almost embarrassing ordeal” though by the end of the year she felt only pride in repeating her name until her interlocutors got it right . . . or nearly right.

This first essay captures a key feature of the author’s style, namely her ability to weave together highly personal observations, with some consideration of sociological and political context in a frank and amusing way, and is perhaps one of her most successful essays in this regard.

In the second essay “Laundry Load,” she ranges from an early hankering for expensive underwear (La Perla) to considering the Myanmar concept of hpone, which refers to “the mystical power that men supposedly possess,” and that would be damaged inter alia by mixing men’s and women’s underwear in the family wash.

Pyae Moe Thet War describes the stronger influence of her mother and grandmother (also referred to as “mother”) who managed the household and in the mother’s case, a career, in her father’s absence in the army. The author remembers her surprise in discovering that her father’s hpone conferred total moral and social superiority, despite his physical and financial absence. In such a context the worst Western concept she “bought into” was clearly feminism, and she references some of her early influences, such as Eve Ensler’s The Vagina Monologues.

Overall, this is a fascinating collection of essays that brilliantly combines humorous and serious observations of cultural differences and issues of gender equality. One of the joys is to trace the author’s growing evolution and self-confidence as a writer and as an independent person, willing to face her own insecurities about, for example, her poor written skills in the Myanmar language. On the way and without drama, Toothpick, the love of her life, becomes Toothpick her ex-boyfriend (we await the sequel).

The volume repays close reading though a few of the essays are overlong and repetitive. Probably the readers who benefit the most will have comparable trajectories, or at least some knowledge of societies that share some comparable characteristics to those of Myanmar, which is not for example alone in its naming patterns, difficult scripts, or ideals of femininity. Perhaps in her next volume Pyae Pyae will explore some of these seemingly highly idiosyncratic features in a broader cultural and political context.

As she writes in her essay “Unique Selling Point,” “The main reason I was drawn to nonfiction from a young age was, frankly, because of my nosiness.” We look forward greatly to further expressions of this trait.