You're Snug with Me 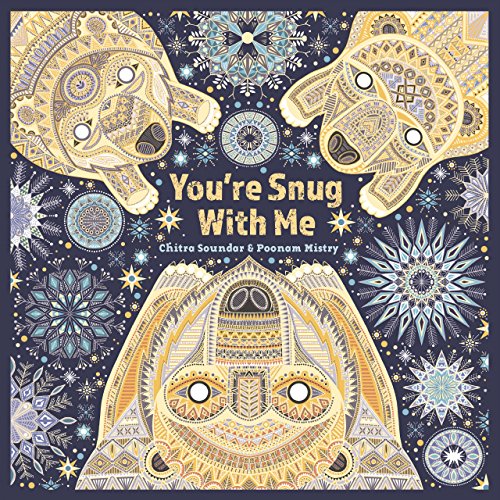 In You’re Snug with Me, author Chitra Soundar has followed the classic children’s storytelling formula of the repeated phrase. She tells a story of a mama polar bear who digs a den deep in the snow where she will stay over winter.

“As the cold set in, she gave birth to two bear cubs. They couldn’t see or hear anything yet, but soon they grew.

As the cubs grow they begin to ask questions about the world outside. “’What lies beyond the ice and snow?’ they asked.

“’Beyond the snow is the ocean,’ said Mama Bear. ‘It is full of ice from long ago.’

“’Don’t be afraid,’ said Mama Bear. ‘As long as the ice stays frozen, we will never go hungry.’

“’Will the ice melt?’ asked the cubs.

The environmental lessons continue throughout the story, with the cubs asking questions, being alarmed by the answers, being reassured that all will be well if the environment is well cared for, and then the repeated mantra, “Hush now, you’re snug with me.”

The borderline preachy text brings to mind the Victorian children’s books designed to edify and improve the morals of young readers. While Soundar’s lessons are not as heavy-handed as the 19th century stories, she clearly has an agenda.

The story is structured to be comforting, promising a snug haven for the young cubs. However, what drives the storyline is the bear cubs’ interest in their world and their frightened response to what they learn. Instead of encouraging her youngsters—and young readers—to have a bold, confident, excited view of the world, Mama Bear tells them to be quiet (“Hush”) and that they’re snug and safe as long as she’s there.

Contrast Soundar’s story with Margaret Wise Brown’s classic 1942 picture book The Runaway Bunny. In Brown’s book, the call and response structure tells the emotionally compelling story of a small child’s first burst of independence. The mother responds with understanding and non-judgment, at the same time giving her affirmation of unconditional love.  Instead of instilling fear, the mother encourages independence while providing a safe, secure environment from which to launch.

“’If you run after me,’ said the little bunny,’ I will become a fish in a trout stream and I will swim away from you.’

“’If you become a fish in a trout stream,’ said his mother, ‘I will become a fisherman and I will fish for you.’”

After a series of interchanges where the bunny  variously suggests he’ll become a rock on a mountain, a crocus in a hidden garden, a bird, a sailboat, a circus acrobat, and finally a little boy, the book concludes,

“’Shucks,’ said the bunny, ‘I might just as well stay where I am and be your little bunny.’

You’re Snug with Me has a mixed message. On the one hand, it encourages fear of the world and for the world’s wellbeing if humans don’t look after the environment. On the other hand, Mama Bear repeats the reassuring message of snugness—as long as the cubs are with her.

The author probably doesn’t intend it, but in the process Mama Bear also discourages curiosity, saying, “Hush” to her cubs after each question they ask. The underlying message of the book is that we live in a dangerous world that, if not properly cared for, is on the brink of destruction.

Poonam Mistry’s dazzling illustrations for You’re Snug with Me have an intricate beauty. A British illustrator with Indian heritage, her artwork is influenced by nature, folklore, and traditional Indian art. Her delicate patterns within patterns bring to mind the decorative, celebratory henna skin designs favored by women on the Indian subcontinent.

Mistry’s powerful images compel readers to pick up the book and peruse the pages, studying the patterns within the outlined shape of the creatures or objects depicted. They are wonderful and extraordinary, but sadly dissonant to the book’s arctic setting. More fitting would have been illustrations in the style of the natives of Alaska.

There is much to recommend this book, but observant readers may find themselves distracted by its flaws.