This Is Your Life, Harriet Chance! 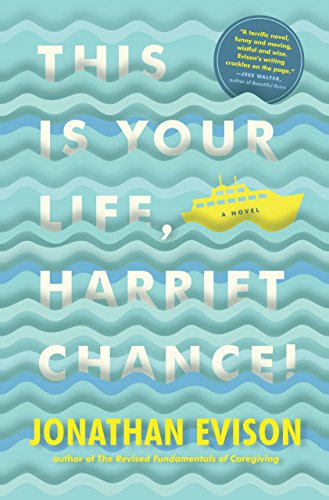 This is Your Life was a popular television show in the 1960s and 1970s, an early reality show that delighted many audiences. Each episode introduced an unsuspecting guest to their past through previous friends, coworkers, and acquaintances. But who is it who decided which people were important or at least significant in our lives?

It’s with this format that Jonathan Evison examines the life story of an elderly widow in This is Your Life, Harriet Chance. Starting at age zero up to seventy-eight, we see the truth and consequences of Harriet’s tumultuous life. As Evison speaks to his protagonist directly, he reminds her that life is like “a pinball, pitching and careening, rebounding off anything it makes contact with.” Harriet is going to be forced to examine past choices that make up her identity and discover what she thought was an option was never even a choice.

As the story begins, Harriet is ambivalent about taking an unexpected cruise to Alaska, a gift from her late husband. His ghost visits her, making her children believe she’s losing her mind. They try to ban her from taking the trip, but she’s determined to go, even if it means going alone. While the random appearances of her late husband continues onboard, as if he’s trying to tell her something, all she’s getting are memories of how unpleasant he was, leaving her to wonder why she misses him so much in the first place.

Bernard is a blue-collar worker who catches Harriet’s eye, despite her being a society girl. It seems muscles can say more than trust funds. They marry quickly, and soon two children join them. The years slip by with Harriet increasingly conscious of how much she gave up for that idealized nuclear family. Then there’s the fact that after the initial thrill of Bernard’s manly persona fades, she’s left with a cranky old man:

“Conversing with Bernard reminds you of talking to your golden retriever. . . . A tilt of the head, a wag of a tail, a snarl—it’s about all you can reasonably expect.”

With these details, Evison takes Harriet back and forth through flashbacks that reveal how modern she was for her time, and how events from the past shape her beyond what she’s willing to admit. At age twenty-five, he asks her:

“Have you released your independence at long last? Have you finally stopped tracking the progress of that other incarnation of yourself. . . . Or have you simply lowered your standards?”

Ouch. Is that what is troubling her, that other self that may have taken a different and better course? One that wouldn’t involve changing her husband’s diapers or watching her daughter steal from her purse? Was there ever a choice?

Before the ship has left the dock, Harriet gets the shock of her life, and it’s not just her dead husband climbing over the railing. She’s shaken by a sudden revelation that knocks her flat, and coping with that can only involve a great deal of wine. Suddenly, Harriet isn’t exactly who she seemed just pages earlier.

Evison teases out the details by flashbacks, reminding Harriet directly that maybe she is not the only one with disappointments. This changeup sets the tone for her cruise off kilter, and she finds it difficult to recover. It doesn’t help that a sudden visitor joins her for the remainder of the trip. The pinball flippers are snapping wildly now. Her future has become a game of chance, and one can only hope Harriet doesn’t end up down the drain or tilting out.

The novel itself is intriguing. Of the frequent flashbacks, Evison handles these well, portraying a lifetime in relatively few chapters. And he shines at describing the awkward moments of life, the minutiae that can trouble us—fat ankles, visits to rest homes, the nature of boxed wine—and shows how these reveal more about us than any autobiography. He suggests our identity isn’t made of grand gestures but how we handle the irritating little things in our life when no one is looking.

The way Evison (the author) handles the direct observations and questioning of Harriet (his character) at the beginning seems fresh and innovative, but becomes a bit tiresome after many chapters. Sometimes the way he speaks to her is annoying:

“So c’mon, birthday girl, turn that frown upside down, and start counting your blessings!”

Another troublesome part of the novel is Bernard’s visits to his after-life handler. Is this heaven? Hell? Maybe it’s purgatory. In any case, Bernard is in trouble for contacting Harriet. But the purpose of these interruptions are never really clear.

That said, the questions Harriet faces are universal and all the more compelling for this reason. Would knowing the outcome of our potential life choices make life happier? Or would we be immobilized with hesitation? Do choices really exist? As in his previous novel, The Revised Fundamentals of Caregiving, Evison demonstrates a gift for dissecting past and present, and revealing the hope we all have not just to win, but to stay in the game.