Your Fatwa Does Not Apply Here: Untold Stories from the Fight against Muslim Fundamantalism 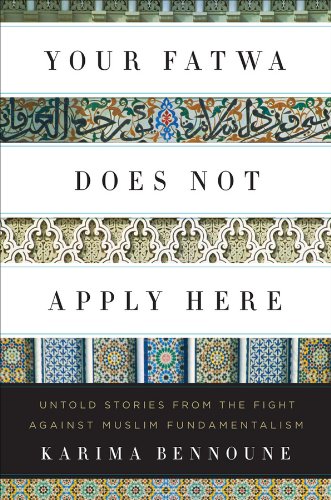 She is widely published, the author of several articles on international law and Muslim fundamentalism; now she has come out with a spunky, feisty collection of essays that seeks to tell an intensely personal and exhaustively researched story of how people of Muslim heritage are courageously fighting Muslim fundamentalism across the world.

Your Fatwa Does Not Apply Here: Untold Stories from the Fight Against Muslim Fundamentalism is an unusual book written from the perspective of a secular Muslim trying to oppose Muslim fundamentalism “in a way that will not be hijacked by those with anti-Muslim agendas.”

“Islam and Islamism are not the same thing,” she writes in the introduction to the book. “The three extra letters make a huge difference . . . The vast majority of Muslims are not fundamentalists, though of course many are. The goal of this book is to rebroadcast the words of those who in fact do the most to dissipate discrimination against Muslims . . . They do this not by mouthing platitudes about ‘Islam-religion-of-peace’ but in many cases by putting their lives on the line to fight fundamentalism.”

What follows is a compilation of case studies, anecdotes, and riveting personal interviews with anti-fundamentalist Muslims around the world assembled between 2010 and 2012 during the author’s travels to France, Algeria, Niger, Pakistan, Turkey, Russia, Palestine/Israel, Egypt, Tunisia, Senegal, Afghanistan, Canada, and Mali. These are supplemented with transcripts of Skype conversations with activists in Saudi Arabia, Sudan, Iraq, and Malaysia.

What clearly emerges from these narratives is that resistance to Islamic fundamentalism is not the unique privilege and prerogative of the West; it is active in the Islamic world itself through such agents as:
Faizan Peerzada, the organizer of the Rafi Peer Theatre Workshop’s Ninth Youth Performing Arts Festival who continues to promote Pakistani theatre even in the face of threats from fundamentalists and the Pakistani Taliban;

Burqavaganza, a 2007 musical produced by the Ajoka Theatre Company in Lahore, Pakistan, that is simultaneously a love story as well as a satirical critique of “mullahs, social conservatism, terrorism, Al Qaeda, and of the policies of successive US administrations toward Pakistan;”

Dissidents and opposition leaders in Iran;

By telling the stories of these opposing voices, Ms. Bennoune seeks to offer a corrective to the existing simple narratives about what it means to be a Muslim in today’s world and redefines the problem of Muslim fundamentalism:

“Ultimately, however, Muslim fundamentalism is not essentially a security question for Westerners. At its very core, it is a basic question of human rights for hundreds of millions of people who live in Muslim majority countries and populations around the world.”

She points out that Western stereotypes of Muslims, as held by organizations such as CNN, include the view that “Muslims are simply too sensitive to tolerate any insult to their prophet and unable to understand Western notions of freedom of expression.” US commentators frequently ask, “Why don’t the Muslims speak out?”

The author responds, “almost no one was listening to those who did.”

Your Fatwa Does Not Apply Here is a rich cornucopia documenting the ongoing worldwide resistance to Muslim fundamentalism by secular Muslims. Whether weighing in on the implications of the Arab Spring, the killing of journalists in Algeria, Al Qaeda, the politics of the veil, or the shooting of Pakistani teenager Malala Yousafzai, the author offers a timely and incisive analysis of a gamut of issues impacting the place of Islam and resistance to Islamic fundamentalism in the world today, as well as shining a light on the true heroism of the unsung heroes of this resistance.

A must read for anyone interested in current affairs.