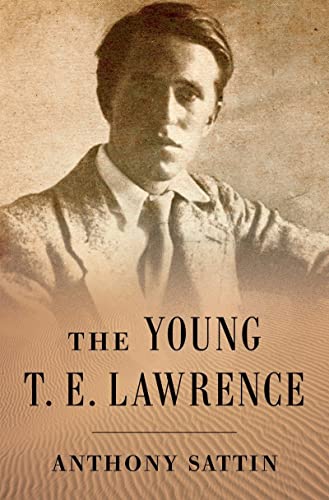 “This highly readable book never lacks for the big story but it also does not let that history lose the hero.”

“Living with and knowing the people of Syria and the surrounding region was not the time of his life but rather it was the beginning of an unimaginatively greater adventure and the restless letdown that such a life must face afterwards. How does one live on after one has become the Lawrence of Arabia?”

The life of Thomas Edward "Ned" Lawrence makes almost any conceivable list of great adventures and thereby of stories to be told over and over again. He was a reclusive celebrity in his own time but so well-remembered that he did not need rediscovery in David Lean's epic motion picture Lawrence of Arabia.

Young Ned, born to a well-to-do English family, stereotypically did not find himself comfortable in his home or British society as much as in his historical dreams of the Crusades and Medieval knights. As a student at Oxford, he cycles across France in search of the architectural history of castles before he carries out an even more demanding adventure in search of the same in Syria during the last days of the Ottoman Empire.

Lawrence took terrible risks but especially considering the increasingly unstable ethnic and political situation as well as his own slight frame and short statue. Bandits robbed him and he contracted malaria. Sometimes he seemed to only survive from the adrenaline of the great adventure of being among exotic peoples in an ancient land as the whole world stood ready for change and merciless world-wide conflict.

That journey by the then young T. E. Lawrence, followed by his work as a novice archaeologist in Syria and Turkey after studying under the renowned William Matthew Flinders Petrie, makes for an epic story to stand on the shelves with the travel accounts of Marco Polo, William Bartram, Charles Darwin, and Richard Burton. Lawrence’s great fame, however, came with his later experiences in the Arab revolt of World War I, all of which became the basis of the published edition of his Seven Pillars of Wisdom.

In the popular mind, that "Great War" began with an assassination in Sarajevo in 1914 but Sattin frames much of his narrative around how that now century old conflict began as early as the deposing of the Sultan of the Ottoman Empire by the Young Turks in 1908 and, with that event, the end of the Caliph that was almost all that held Islam together in the Middle East.

Even today we still feel the effects of that change but T. E. Lawrence witnessed the beginnings first hand as a young explorer and archaeologist in Syria. Living with and knowing the people of Syria and the surrounding region was not the time of his life but rather it was the beginning of an unimaginatively greater adventure and the restless letdown that such a life must face afterwards. How does one live on after one has become the Lawrence of Arabia?

Anthony Sattin proves that the British know how to write a great adventure as well how to have one. This highly readable book never lacks for the big story but it also does not let that history lose the hero. Lawrence comes across in these pages as painfully shy and socially awkward, the stereotypical loner who was never more alone that when at home and with the familiar. He fit best in a world where he had no connection beyond a romantic quest for the exotically strange. In the Middle East, however, he would find himself fitting in no better within the British army than he did as a civilian at Oxford.

Sattin doubts that Lawrence was early on a spy and suspects that his interest in sex was closer to non-existent than to anything controversial then or since.