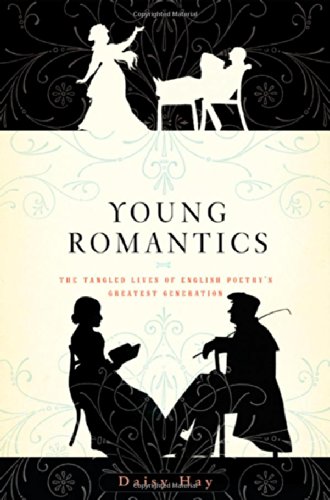 Little is done to untangle the lives of the young Romantic poets and their inner circles in Daisy Hay’s rambling, unfocused 364-page perambulation that reads more like a doctoral thesis (with almost 20 pages of footnotes!) than an entertaining read about “English poetry’s greatest generation.” The title and subtitle suggest a kind of footloose, Sex and the City set in early nineteenth-century Europe, or at least a story being marketed to those who would like to imagine the lives of the Romantic poets that way.  Instead, Young Romantics is a well-researched but pedantic history of the raw tragedies of a few brilliant men and women?despondent wives or sisters committing suicide, babies dying of near-neglect, men sent to prison because they libeled the government, and promising intellectuals dying of accidents or disease in their twenties. While there is enough drama in the above material, Hay’s grimly diligent writing style renders it all a little bloodless. The sizeable ensemble of subjects results in a text that feels like one long chapter?take a deep breath and read?artificially partitioned into three sections with several chapters in each.  One of the annoying editorial aspects of the book is how the chapter titles never seem to reflect the content. In Part 3, the chapters are inexplicably titled “The Future,” “The Present,” and “The Past,” in that order. While most readers will be passing familiar with towering literary figures such as Lord Byron, John Keats, Percy Bysshe Shelley, and his wife Mary Shelley, some lesser known figures in their circle such as Leigh Hunt, Claire Claremont (Mary’s half-sister), Thomas Love Peacock, and Edward Novello are portrayed not only in relation to their better-known colleagues but also for the details of their own lives. Hay can be commended for her hard work in rounding up this cast of semi-tragic characters and showing how their family lives and social networks were connected with liberal philosophies in politics and in the bedroom, but somehow it feels as if the author is hiding behind a stack of research texts and a massive bibliography. If this is more than just an English Lit 101 university textbook, we would like to know: What does she think about the Romantics? What was learned from their constant need for sociability as well as solitude? How does she feel about their culture and their politics? How are these analogous or dissimilar to contemporary bohemian artists? Oscar Wilde was pilloried a few decades later for challenging the status quo, so did they really change their culture at all? These are the things we would like to have heard from the author, even if it meant adding another 100 pages to this already lengthy volume. In her thoroughness to cover everything, Hay may have buried the lead, or leads. Is this a book about Leigh Hunt? Lord Byron? Percy Shelley? Or is it really about Mary Shelley and the women in the lives of these men?  The author’s inspiration for the work was, in fact, a bitter memoir written late in life by Claire Claremont, so perhaps Hay’s book should have started with that text, then flashed back in time to how it all started. Byron is rightly portrayed as a larger-than-life figure, a kind of nineteenth-century Mick Jagger who enjoyed status, wealth, fame, critical success, and countless lovers.  However, while poets like Hunt, Shelley, and even Keats were struggling to make a name for themselves in England and abroad, Mary Shelley’s Frankenstein was becoming a sensation in England and Bess Hunt (Leigh’s sister-in-law) was enjoying popular success with her book on flowers, Flora Domestica.    Too bad the Young Romantics did not leave enough room for more quotations from the works of the poets. While the text often refers to the genesis of key works in their canon, it would have been a pleasure to be offered a few snippets as examples (which the author did sometimes, but not often enough).   Young Romantics does, however, show very explicitly how the literature of these men and women was not written in a vacuum, but was profoundly influenced by each other’s company and collaboration.