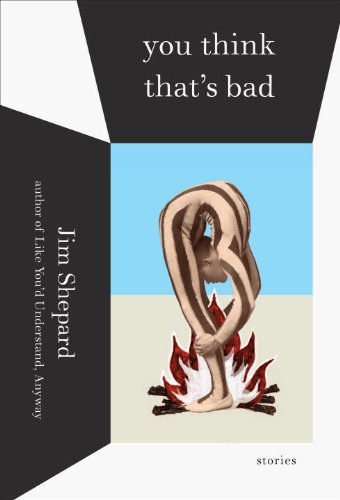 In the course of “The Netherlands Lives with Water,” one of the short stories that comprises the new collection, You Think That’s Bad, author Jim Shepard tells a joke. “When you buy a shirt in Rotterdam,” he writes, giving us an idea of how dour and dedicated a place Rotterdam can be, “It comes with the sleeves already rolled up.”

The reader ponders the joke as it fades in the rearview window of the printed page, and, as he does so, more and more it seems to be very good advice for approaching these short stories, and, especially for dealing with “Netherlands” itself—one needs one’s metaphoric sleeves rolled up. Because these are not the stories to read when trying to calm the mind for sleep at night, or the stories that will get you through a head cold or flu, these stories are filled with Medusa eyes, things that will, if you look directly at them, turn your heart to stone.

The question is, does the reader, in reading short stories, wish for such a transformation, or does he like his heart just as it is?

Consider again “The Netherlands Lives with Water,” a story that, in Mr. Shepard’s own Acknowledgements, rates, by quick count, nearly two-dozen references, including “Rotterdam’s Waterplan 2 Rotterdam,” “Preserving the Environment and Securing Zeeland Against Flooding,” “Stadshavens Rotterdam’s 1600 Hectares: Creating on the Edge,” and “The Dutch Delta Program’s Knowledge for Climate 2008–2013,” among many others. Perhaps never before in human history have so few short stories (just eleven are collected here) been so scrupulously researched.

Indeed, many book-length works of nonfiction come with a skimpier bibliography.

“Is this the real thing?” The reader asks himself in working through the supposed short story. “Or has Arianna Huffington finally made bloggers of us all?”

While the story reveals the secrets of life in shrinking, bobbing Rotterdam, it is mysteriously short on character, plot, and story arc as the reader knows it. Perhaps these things had been jettisoned in order to keep Rotterdam afloat, but the reader, in finishing the story, felt more as if he had himself plodded through the Ministerie van Verkeer en Waterstaaat’s Storm in Perspective instead of a work of short fiction, unsettling sex scenes included.

In short, reading You Think that’s Bad (with it’s taunting title made all the stranger by the fact that there is no short story with that title in the collection) is like taking a class in modern fiction that is being taught in a language in which one is not fluent. You catch a word here, a phrase there, but are left basically perplexed.

But more than anything else, reading this collection is akin to wrestling with an angel. One can only hang on tight and pray for some sort of blessing.

And blessings, in You Think That’s Bad, are few and far between.

The low point of the collection is perhaps to be found in the story “Classical Scenes of Farewell,” the source material for which, according again to the Acknowledgements includes “Jules Michelet’s Satanism and Witchcraft,” “Reginald Hyalle’s Laughter for the Devil,” and “Marjorie Rowling’s Everyday Life in Medieval Times.”

Presented as a first-person account of wealth and depravity, “Classical Scenes of Farewell” presents a blood red landscape of sexual perversion and the cruelty of privilege. In preparing his scene, Mr. Shepard writes:

“I was born Etienne Corillaut of Pouzauges, in the diocese of Lucon, and am know as Poitou, and I am now of twenty-two years of age, and here acknowledge to the best of my abilities the reasons for those acts that have made this name along with my master’s the object of hatred throughout the region. . . . My master is Gilles de Rais, whom I have served as page and then bodyservant for these last six years; and for the past three, se he first offered access to the full chamber of his secrets, he and I with five others I will name have been responsible for the entrapment and mutilation and dismemberment and death of one hundred and forty-two children between the ages of five and fifteen.”

Mr. Shepard uses the historic truth of the case and crafts the tale as a monologue, as Poitou’s meditation on evil. Granted, his presentation of Poitou’s descent from potential victim to victimizer supreme is effective, if ghoulish. But “Classical Scenes of Farwell,” like “Netherlands” before it, reads as an uncomfortable hybrid, a blend of hellbent (in this case particularly) research grafted onto poetic artifice. The result presents as an above-average term paper presented at an exclusive Manhattan Montessori school.

More effective are the stories that Mr. Shepard permits to just be stories. Things told through plot and character. Both “Boys Town,” a sad tale of a drunken mother and a violent son and his dog; and “The Track of the Assassins,” a story of British woman, her guide, their muleteer, a few donkeys, and a bizarre march through what is likely the harshest terrain on Earth to the Citadel of Assassins (best known, perhaps by the video game of the same name) succeed because they give us a reference point in humanity that other stories lack.

But the best comes last, with “Poland Is Watching,” the story in which Mr. Shepard finally triumphs, in that he manages a blend of his innate need to anchor his story in research, this time of what it takes to do a winter climb of a Himalayan peak (“Greg Child’s Thin Air: Encounters in the Himalayas,” “Mark Jenkins’ ‘Ice Warriors,’” and “Anatoli Boukreev’s Above the Clouds,” among others), with a solid story detailing the threads of love of home and hearth that tug at the men who reach for mountaintops, nearly pulling them off the mountain. In this story, better than any other, Mr. Shepard works both head and heart to create a work of fiction that does what fiction does best as it illuminates, enlightens, and entertains.

Jim Shepard is a wordsmith, no doubt. He weaves a sentence as a spider does its web. Would that the resulting structure would leave the reader feeling a little less like an ensnared fly that, having expended all its energy in trying to escape, now waits in horror to be consumed.