You Have the Right to Remain Innocent 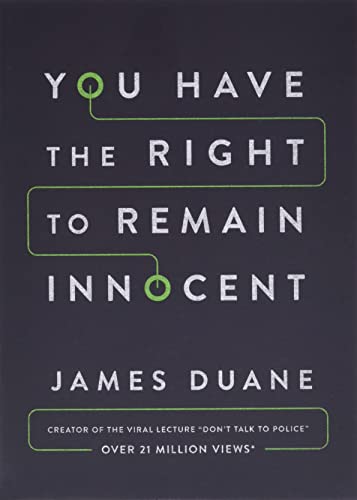 Don’t talk to police! What? Why not? Law professor James J. Duane tells you why; and if you do not heed his advice, you do so at your peril. Does that shock you? Well, it should, and in 120 riveting pages Professor Duane explains why with detailed examples.

What he writes is shocking especially so if you are a law and order type of person, and most of us are, at least to some extent.

You have a right to remain innocent! Of course, we all do. Do we not? Professor Duane will tell you that such may not be the case if you talk to police in all but a few instances. In every state you are required to talk to police if you are involved in a traffic accident or a shooting. Further you are required to talk with police if you are the victim of a crime or a witness to one. In addition, the author provides several common sense or reasonable situations in which it is in your best interests to talk to police, but to do it where you are at that moment.

For example, you are an honest and upright individual. One day there is a knock on your door, you answer it, and a couple of police officers ask if they could talk to you about some matter. Since you want to be helpful and have nothing to hide, you say “yes.” They ask you a few questions then they ask if you would voluntarily come downtown to clear up a certain matter. What would you do next?

Before you answer that question it would be wise for you to read this book.  Failure to do so could quite easily lead to the biggest mistake of your life. Law Professor James Duane discusses why in his book You Have a Right to Remain Innocent.

Perhaps you are now saying to yourself that you have never done anything wrong in your life. And you do not expect to do so in the future, either. That may well be true, but you do not have to do anything wrong to be on the opposite side of the law.

C. Ronald Huff, Professor Emeritus of the University of California, published a study in 1990 and found the approximately 10,000 people per year are wrongly convicted of crimes they did not commit. Interestingly these figures were obtained by interviewing judges, prosecutors, and lawyers. But that study is almost 20 years old. Things have changed since then, right? Yes, but not in your favor.

It might be interesting to note that Professor Marvin Zalman, Department of Criminal Justice, Wayne State University in Detroit, is an authority on wrongful convictions. In his 2012 study he learned that between 5,000 and 10,000 persons are wrongfully convicted of crimes. But he adds a caveat. The real figure, he noted, maybe closer to 20,000 per year.

That figure may be fine with you, but not if you, a family member, or friend is one of those statistics.

In short, the days of Father Knows Best and Ozzie and Harriet are long gone. America has changed, and you need to realize this or you could be one of the many innocent persons convicted of a crime you did not commit.

Today’s legal system, according to the author, is designed “to prey upon ignorance and good intentions.” Yours. The author explains why this is so and in great detail with numerous examples.

Here are a couple of reasons he discussed in his book. You have to tell all law enforcement officers and agents the truth. A misstated fact is no excuse for the lack of accuracy. The law enforcement agent can lie his or her head off and that is fine with the courts. Not all crimes are located in Title 18 (Crimes and Criminal Procedure) of the United States Code. Crimes are spread throughout the 52 sections of the U.S. Code. Supreme Court Justice Stephen Breyer complained in 1998 that the United States Code is so complex that no one can be expected to know all the possible violations beforehand.

Former United States Attorney General Edward Meese said “that there is little or no hope of knowing all of the thousands of criminal-law regulations . . .”

So against the advice of Professor Duane you agree to talk to the police or government agent anyway. Perhaps you are very nervous during the interview. Or perhaps you are calm and collected, too much so in the officer’s opinion. The courts have accepted both of these as a sign of guilt. Still want to talk to the government man/woman?

Now you are rather uncomfortable, aren’t you? You decide that you will plead the Fifth Amendment. Not so quick, friend.

Former Supreme Court Justice Antonin Scalia set the standard for interpreting what this “really” means in Mitchell v. United States and is quoted here for your edification, “It I ask my son whether he saw a movie I had forbidden him to watch, and he remains silent, the import of his silence is clear.” To understand Judge Scalia’s logic and that of the U.S. court system you need to read this book and take it to heart.

There is a way out of your dilemma and it is four simple words: “I want a lawyer.” in uttering those words be courteous yet forceful and then shut up.

One of the best decisions you ever make could very well be to read this book. Professor James Duane explains all in a mere 120 pages. A word to the wise is sufficient.