You Have a Friend in 10A: Stories 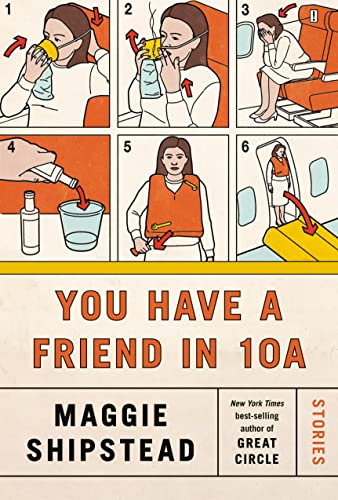 The stories in Maggie Shipstead’s You Have a Friend in 10A were published in literary journals between 2009 and 2017. Writers of short literary fiction like to show range, and these pieces certainly travel widely, not only in terms of places but also in setting and milieu.

On a Montana dude ranch in some indeterminate time, the skinny and 16-year-old Sammy Boone answers a job posting and impresses Mr. Glen Otterbausch, the owner, with her ability to handle a horse. And, well, they don’t see many young women in those parts. Later, Mr. Otterbausch’s nephew, Harrison Greene, his marriage over, shows up, towing a trailer containing a fine horse named Digger. The scene is set for a love triangle that unfolds over long spaces of time, The Great Gatsby in Big Sky country. Sammy never does say much.

In Shipstead’s acknowledgements she cites artist’s retreats and college programs, and so it’s not surprising two of the stories are set at them. “Acknowledgements” is the first-person story of one Daniel Manitou Murphy whose great subject is himself. The story is great fun, but Murphy is a bit of a pompous, self-righteous caricature. When a woman he once kissed goes in another direction, the revenge that comes out of his typewriter is over the top. Actually, all of Murphy’s referenced literary output appears to involve retaliation against women perceived to have wronged him.

Rather better is “Lambs,” set thinly veiled at the sheep-infested Cill Rialaig Artist Retreat in Ireland. A small knot of artists gathers for a dinner, featuring a highly self-regarding Danish artist/poet/photographer named Bettina Ericsson. Setting such types up for deflation is a Shipstead specialty, but this doesn’t quite happen as it does in “Acknowledgements.” Ericsson probably deserves her acclaim, and it’s hard to know what the American watercolorist—who trysted with the great lady in New York long ago, but she doesn’t remember—thinks of her now. But she sings a lovely ballad and described a vivid, world-changing vision she had while meeting the Loneliest Man in the World in the Arctic wilderness. An original piece of fiction.

Two stories are set in and around Hollywood, including the title story—probably the least successful, though the splashiest, in the collection. Rachel Kushner acolytes will like it, but much of it seems to go for shock value. An opener that has a teen movie actress describing how her director “asked me to hold his balls while he jerked off” isn’t headed for the sublime. Speaking of thin veiling, the unlikable, drugged-up-then-rehabbed ingenue—who never really comes alive as a character—is apparently modeled on Katie Holmes, marries a huge star named Billy who’s exactly like Tom Cruise, and is roped by him into a cult that’s a photo duplicate of Scientology. When she escapes, as Holmes did, there’s no sense of relief—the world was safer with her under the Founder’s heel.

But “Angel Lust,” set in LA, works. Simon Orff is another one of Shipstead’s clichés, a Malibu-based movie producer on his third wife. Just when you think the story’s going to be all sitting by the pool, doing coke, and exchanging cutting witticisms (Robert Stone was the master of this) it takes a welcome turn. Orff’s two world-weary daughters show up, and off they go to sift through the leavings at the sad home of the producer’s recently deceased father. The story keeps surprising.

Shipstead has fairly good success imagining worlds far away from her own—perhaps she admires how T. C. Boyle does this. In “Souterrain” a blind old man dies, leaving a mystery behind that continues to infect the living. The author doesn’t really set time and place in her stories, but this feels like 19th century France. It’s all a bit stilted, but compelling nonetheless.

Boyle could have written “The Great Central Pacific Guano Company,” but he’d have anchored his story in the period. This one is unstuck in time, with something of the doomed feel of Werner Herzog’s brilliant 1972 Aguirre: The Wrath of God. A madman leads a whole out-of-place Western settlement to the edge. Herzog was always going to finish them off—only the monkeys are left—but what will Shipstead do with these residents of a remote Pacific atoll, trying to keep up appearances as the food runs out?

Not all of Shipstead’s arrows hit their mark, but enough do to keep the pages turning.