You Gotta Get Bigger Dreams: My Life in Stories and Pictures 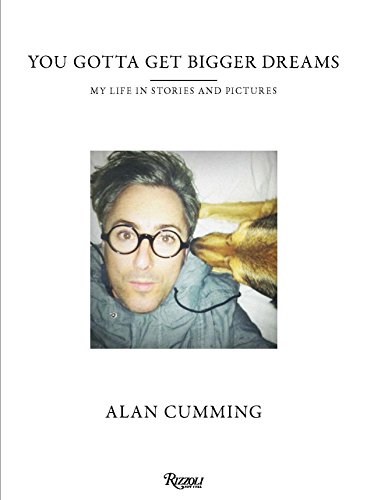 After multiple seasons on The Good Wife, and a bestseller in his first memoir, Not My Father’s Son, his follow up, You Gotta Get Bigger Dreams (awful title, but wait—there’s a reason) walks the line between memoir and scrapbook—an amalgam of photos and funny stories, some no more than quips, that, while far from revelatory, is extremely entertaining.

“Once I was working out in a gym in Vancouver. When I arrived I’d seen a few people whispering about me, something that I am very used to and so I thought little of it. A short time later, as I was puffing away on the pec machine, a young, perfectly formed trainer walked toward me looking a little sheepish.

“‘Of course,’ I countered, knowing the best way to deal with this situation was to find a pen and a piece of paper, give him the autograph, and let us both move on as quickly and effectively as possible. But no, that was not what he wanted at all.

“‘Some of the members are offended by your . . .’ He gestured down to me with his muscly hand and for an awful, brief moment I thought my penis was sticking out of my shorts. But then I realized the cause of his consternation. I was wearing a ‘Fuck Yoga’ tank top.

“‘My shirt?’ I asked incredulously.

“‘Yes. Many of our members practice yoga,’ he said solemnly.

“‘Well, so do I!’ I laughed a little, aware now of those I had offended looking over from their little Lululemon huddle. ‘Look at my body!’

“I admit this was a strange and possibly ill-timed admonition but it was true. Had there been a yoga class available there was no way I would have been struggling with these unfamiliar fitness machines.

“‘Our members don’t like yoga being made fun of,’ the trainer continued.

“I looked over his should at my humorless Canadian accusers and shouted, ‘But it’s a joke! It’s ironic! I love yoga!’

“They turned away, as one. I noticed one of them was wearing white socks that came up to just below his knobby knees and at that exact moment I knew it was a lost cause. I got up and left.”

And while the memoir is sort of festooned with anecdotes about dogs and pictures of those dogs (an opening chapter is sort of a Travels with Charley riff with Cumming and his dog Honey driving cross-country), the best bits uniformly involve star sighting and encounters with the rich and famous—tales of Klaus Nomi, Iman, and Iris Apfel (“She was fashion, she looked like a hippie granny, she was cool. Well, all these things are true, but what I did not bargain for was Iris being a rabid Republican.”) all make for great fun, but it’s the bigger names like Elizabeth Taylor and Oprah who steal the show.

She tells him how she injured herself by falling in her dining room and hitting the floor, hard.

“‘Alan,’ she growled like the Cat on the Hot Tin Roof she still was. ‘You have never seen such a black ass.’

“My mouth gaped open in an involuntary gasp. I waited just a beat longer, then with the most saucy twinkle in my eye I had ever mustered, threw down my slam dunk. ‘Oh, Elizabeth,’ I said. ‘I bet I have!’

“Suddenly her hand unlocked from mine and slapped me across the chest. She cackled like a trucker who’d just heard a good fart joke.”

The Oprah bit is even better.

Happily, Oprah has to use the facilities, taking her within a few feet of their table.

Seizing the moment, Eddie says, “in a very endearing and choirboy-like voice, ‘Oprah! May I have a picture with you? It would be my dream.”

“You gotta get bigger dreams.”

There’s also the story that ends with Gore Vidal peeing over the edge of the terrace of his villa on the Amalfi coast in Italy.

And proof that Kylie Minogue is as good a sport as you’d want her to be.

And then there’s this:

“The first thing Liza Minnelli ever said to me was, ‘Alan, I want to be your friend forever!”

There’s a lot of joy in this book and a lot of laughs. You Gotta Get Bigger Dreams is the best part of experiencing New York nightlife: all the gossip without the hangover.

And, like Kylie Minogue, it’s everything you’d want it to be.