You Fit the Pattern (A Julia Gooden Mystery) 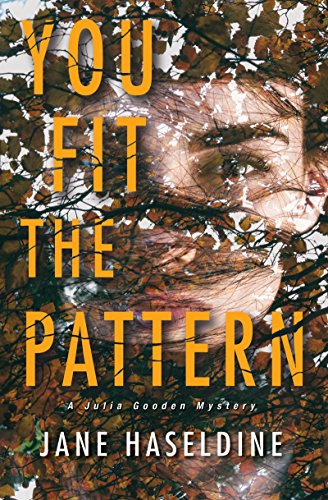 The fourth in Jane Haseldine’s Julia Gooden mystery series, You Fit the Pattern, resumes after her major scoop of discovering the truths in her own family: her much-loved brother’s childhood abduction, his killer (found by Julia 30 years after the crime), and the devastating role their father played in the crimes.

Meanwhile, active crimes in Detroit have spun out of control while Julia was swamped in her own detection. There’s a killer seizing woman joggers, creating a pattern of highly planned and horrific deaths for them. When Julia realizes the serial killer is picking out women who resemble her, enacting over and over a both a passion for her and a deadly obsession, she can’t help feeling responsible—and driven to take risks to bring the murderer out of hiding.

Also at stake, of course, is the safety of Julia’s young sons, already traumatized enough by the threats that her career has brought into their lives. Thank goodness for her motherly housekeeper Helen and for Julia’s increasing closeness to Detective Raymond Navarro, both doing their best to keep her safe.

But when the killer’s routine turns out to include a voodoo symbol, as well as items that make it clear he’s stalking Julia and her family, things rapidly get very creepy. Soon the killer even has a nickname: the Magic Man Killer.

The one plus to this escalating mode of threat is it pulls Julia and Navarro closer:

“Navarro sighed and ran his fingers in frustration through his thick shock of dark hair.

“’You need to do something for me. I’m not going to let you and your boys hang solo with all this going down. I checked with my apartment manager. He has a vacant unit next to mine . . . And I’ll be right there. I’m not going to discount that the killer knows where you live. . . . please think about it.’

“’Not this time. The Magic Man Killer has got a direct line to me. I don’t know how close it is, but I need to make sure he doesn’t get anywhere near my family.’”

But of course, safety’s not that simple, especially when Julia’s own drive to investigate and get the story become tangled with the creeps tracking her and trying to lure her in. Yes, that’s creeps, plural. When the nasty part of the world opens up, there’s way too much evil in there.

Haseldine’s narrative is strong and direct, a good fit for her protagonist. With this fourth in the series, Haseldine has clearly grown more adept at holding all the cards in her hands, from threats to red herrings to cop-shop interference and the loyalties that make live worth living. Fans of Karen Slaughter will find Haseldine’s crime fiction rewarding, and it’s also a good balance to another excellent Detroit series from Stephen Mack Jones; of course there’s also a hint of Loren D. Estleman’s Motor City mysteries here, too.

There’s no need to read the preceding titles first (The Last Time She Saw Him, Duplicity, Worth Killing For). But the satisfaction of seeing this sometimes gritty and always fast-paced series maturing makes it worth gathering all four titles on the shelf and watching for the next one.