You Don't Have to Say You Love Me: A Memoir 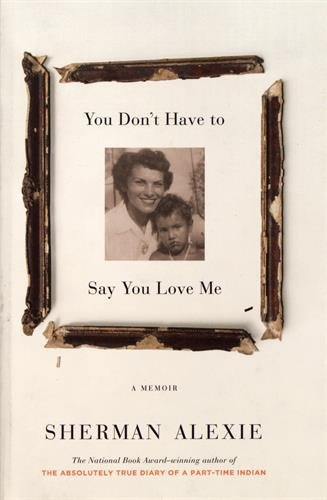 Sherman Alexie’s compelling memoir offers a mix of poetry and prose that links emotional intimacy to a powerful narrative that will likely keep readers off balance. That’s probably the author’s intention. While he might be writing for Native Americans, he’s also clearly aiming to reach educated white middle class people who often assume they’ve gone beyond ethnic stereotypes.

Alexie invites them to look at themselves in a gigantic mirror that reflects both realities and clichés, movie images as well as legends created by both “pale faces” and “redskins,” as they've often been called for hundreds of years going all the way back to James Fenimore Cooper.

A Spokane/Coeur d’Alene Native American who grew up on a reservation and who lives now in Seattle, Alexie is the author of several outstanding works of fiction, including a riveting novel, The Absolute True Diary of a Part-Time Indian, and a brilliant collection of short stories, The Lone Ranger and Tonto Fistfight in Heaven. As the titles of those two books suggest, he’s a trickster who mixes fact and fiction, autobiography and myth, and in the process reimagines America itself as a land of great sadness and great beauty where families fall apart and come together again.

Alexie doesn’t let white people off the hook. But he doesn’t let Native Americans off the hook either. Moreover, he seems to be scrupulously honest about his own scars and about his father and especially his mother who seemed to be, he explains, “all by herself, an entire tribe of contradictions.”

Reading this memoir one wonders how Alexie himself managed to survive adversity and to become a brilliant author imbued with a deeply ingrained sense of humor and with wellsprings of compassion. But perhaps that’s a patronizing perspective. American writers, from Frederick Douglass to James Baldwin, have often come from the margins of our society and have pointed out our collective hypocrisies, shams, and deceits.

You Don’t Have to Say You Love Me begins this way: “In 1972 OR 1973, or maybe in 1974, my mother and father hosted a dangerous New Year’s Eve party at our home in Wellpinit, Washington, on the Spokane Indian Reservation.” The exact year doesn’t really matter; indeed, precise dates and times don’t matter in this memoir. The author’s feelings do matter intensely. So does the reservation and a keen sense of impending danger, which lurks almost everywhere.

Still, in these pages, there are no battles at Wounded Knee and there’s no Trail of Broken Tears, either. Alexis focuses on personal history, not the epic saga about the frontier and the conquest of the West that has been told over and over again.

By looking at his own family close up, he reinvents the saga of the Native American for the 21st century. Indeed, Alexie must have finished this book very recently. After all, Donald Trump makes a dramatic appearance, as does Hillary Clinton. Contemporary U.S. politics provides a backdrop; many of the chapters might have been inspired by stories about disasters and catastrophes culled from TV and the Internet.

The poetry in the book returns the reader again and again to the author’s interior life, his dreams, his memories. Sherman Alexie is the quiet hero of You Don’t Have to Say You Love Me. He’s a flawed hero, not a Native American superman. The Native Americans that he describes are often sad, tragic, wounded human beings.

At times one wants to close one’s eyes and skip certain passages. But Alexie urges the reader to be as unflinchingly honest and accepting of life as he. One really has no choice but to go on reading. The cadences and the rhythms of the prose carry one along.

Alexie’s memoir ends with prose that’s as poetic as any of the poems in the book. “I dreamed I could hover like one feather, like a man made of feathers,” he explains. “And then I dreamed that each of my scars was a bird. And then I flew.”